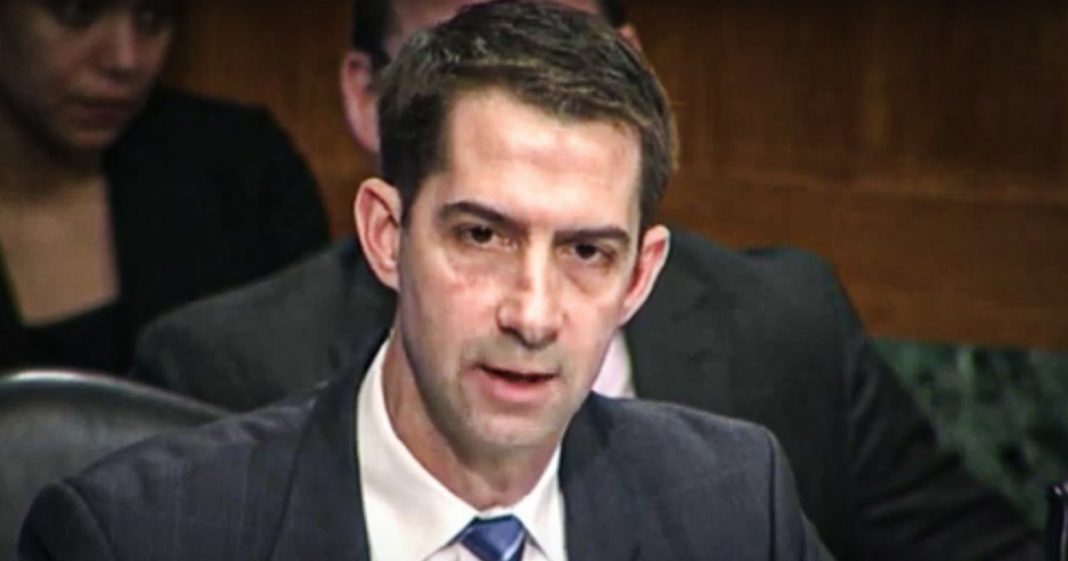 Republicans in Congress aren’t happy that the bills being forward by Democrats aren’t going far enough to help the American public. Mitt Romney says that we need to institute an emergency UBI program while Democrats say that the program needs to be means-tested so that we don’t give money to people who don’t need it. Tom Cotton is criticizing Nancy Pelosi for not doing enough to help people get paid sick leave. This virus has turned the country upside down, and things are starting to look unrecognizable in DC, as Ring of Fire’s Farron Cousins explains.

A very weird thing is happening right now in Washington DC and it’s a thing that I’m not quite sure why it’s happening, but it is happening nonetheless. And that is that some very conservative Republicans in the Senate are now coming out as more progressive than the Democrats in the House of Representatives. Here’s where it all began. Last Friday, Nancy Pelosi worked on this compromise coronavirus response bill with treasury secretary Steve Mnuchin, by the way. The two of them cooked this up themselves and it doesn’t do a whole heck of a lot to help American citizens. You know, it excludes about 80% of the country from any kind of paid sick leave. So right off the bat, it’s a failure. If you’re not going to include 100% of people in this, it’s a failure and Pelosi still thought, hey, well it’s a good thing. And so you had Tom Cotton go on Fox news yesterday where he criticized Pelosi for not doing enough to help the American public, saying that her bill does not go far enough. It does not help enough people and we can’t have that in this time of crisis.

I mean, you got Tom Cotton out there talking like Bernie Sanders and Tom Cotton is the guy who very likely committed treason by telling Iran’s leaders to pull themselves out of the nuclear agreement that Barack Obama had created many years ago. And even he understands that at a time like this, you have to help out the American public and Pelosi would rather work with Steve Mnuchin than help the public. Then of course, yesterday you had Mitt Romney coming out and saying that we need universal basic income UBI. We need to start issuing checks. Thousand dollars a piece to American citizens. That’s, that’s the way we’re going to get through this. Everybody needs $1,000 per month until we can get this problem solved so the economy doesn’t crash. And then in response to Mitt Romney, you had Democrats, particularly Brian Schatz, Democratic Senator from Hawaii who came out and said, now hold your horses there, Mitt. We can’t just give everybody $1,000 a month. What about the people who don’t need it? What, what do we do about that? We’ve given them $1,000 and now they don’t even really need it. We’ve got to have some kind of, you know thing to figure out who needs it the most. We’ve got to help the really needy.

Basically what Schatz is telling us is we got to have means testing. So if you make a certain amount of money per year, if it’s over the threshold, you’re not going to get that emergency UBI payment that even Republicans are wanting everybody in this country to have. At this very moment we have very horrible, very conservative Republicans in DC who are coming out as far more progressive than the actual Democrats in DC. Everything is a little topsy turvy right now, everybody’s a little bit on edge and yet it almost pains me to say this, Republicans are having better ideas about how to fix the public, how to protect the public than the Democrats. Now let’s not give all praise to Republicans, right? Because they are holding up several relief bills currently in the Senate. They don’t want that to happen. You had Louie Gohmert yesterday, single handedly block a bill in the House. So no, Republicans are not the heroes here, but unfortunately, neither are Democrats and in this time of crisis, in any time of crisis, the one thing the public desperately needs is a hero, and unfortunately, no one has risen to that occasion.