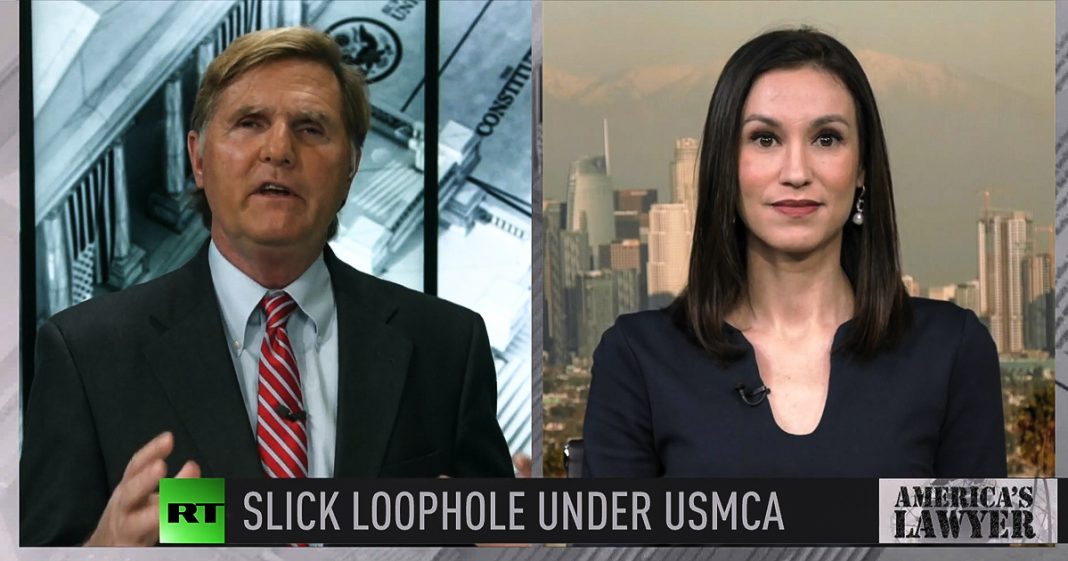 Mike Papantonio:             The new North American free trade agreement has ended corporate arbitration for most industries, but loopholes give major concessions to the US energy sector. RT’s Brigida Santos joins me now to talk about this story. Brigida, we, we started talking about TPP couple of years ago, didn’t we? We, we, you and I did a couple of segments on TPP and the thing that you raised, the, the, some of the issues you raised are exactly coming to roost here right now.

You talked about the ISDS problem, which is, is this. Is that under the, under the TPP, under NAFTA, under CAFTA you had foreign corporations that were able to boss us around according to our laws. They could come in here and say you can’t enforce environmental cases because it affects our business or you can’t enforce safety cases of any kind, pharmaceutical, name it, because it affects our sales. So you arrive there, pick it up. What can, what can you tell me about this new trade pact and how it affects disputes?

Brigida Santos:                   Sure, well. Yeah, president Donald Trump has rebranded the North American Free Trade Agreement, aka NAFTA, with a new pact known as the US Mexico Canada agreement. The USMCA passed with bipartisan support from Congress. Democrats and Republicans both cheered the gutting of NAFTA as controversial investor state dispute settlement clauses which empower multinational corporations to sue governments when laws threaten investor profits. Like you just said, for example, if the US were to implement new regulations expanding environmental, health or labor protections, Canadian or Mexican companies could then sue the American government if those new laws undermined that company’s ability to profit.

Now, under those same ISDS rules, American companies are also free to do the same. So the new trade pact is different because it’s actually abandoned investor state dispute settlements for most industries. But there is now an exception for American oil and gas firms that have government contracts in Mexico. So US energy is really the big winner of this new North American free trade deal.

Mike Papantonio:             Well, I mean, the point is this, when we drill down on what the whole problem is with globalization, one of it is is we’re able, you have a foreign, a foreign country, you’ve got France or wherever, Mexico, Asia, wherever. They come to the United States and they say to us, you have affected our right to go to, to come to America and cut down all of your timber. You have affected our right to take our toxins and put them in your streams because you’re affecting our business. This is the same kind of analysis here, but we’re giving this extra protection to the American oil and gas industry. Why, why is Mexico significant to this particular part of the story?

Brigida Santos:                   Well, Mexico is significant because international companies now hold exploration and production rights and offshore and onshore blocks of Mexico. Mexico is the number one destination, believe it or not, for American gas, oil and refined product exports. Now, before NAFTA, only Mexico state owned petroleum company could operate in the country’s upstream segment. But recent reforms in the last few years have actually opened the country up to more privatization. And the problem is that these new trade agreement, this new trade agreement locks those reforms in and makes it really hard for future Mexican administrations to change their policies without the risk of being sued by the American energy industry. The whole reason these are a problem is because they really impede on the sovereignty of these nations.

Mike Papantonio:             Well, that’s the whole idea with this whole globalization though. In other words, think about what you just said. I mean, I, I hope the viewers caught that. If, if, if Mexico passes laws and they say to the oil industry, what you’re doing is hurting our people, what you’re doing is destroying our waterways, it’s destroying our environment. They’re not able, they’re not able to push back when the oil company comes back in and sues them. Even though, even though there’s laws on the Mexican books that say you can’t do this oil company, the oil company says those laws interfere with our right to do business no matter how horrendous the business may be.

My point is they were trying to do that in the United States under globalization and now we’re seeing it play itself out right here. For those who don’t know, Brigida, how to investor state’s dispute settlement, how does that harm taxpayers? They, most people don’t understand how it affects taxpayers.

Brigida Santos:                   Sure. Well, these cases are heard outside domestic courts in private arbitration. They basically create a shadow legal system for corporate polluters and criminals and their decisions cannot be appealed. And when corporations win, taxpayers foot the bill to cover losses on a company’s estimated future profits. Now I’ll give you an example. American taxpayers, one’s paid Canada over $1 million after the US-based, US-based pharmaceutical company, Eli Lilly, lost a lawsuit that it had brought against the Canadian government for the country’s drug patent system. We’re constantly told that Congress is completely divided among party lines, but here it is again, uniting for corporate interests.

Mike Papantonio:             Mhmm. Globalization’s a disaster. Thanks for joining me, Brigida, let’s, let’s, let’s talk about the story some more in the future. Okay.