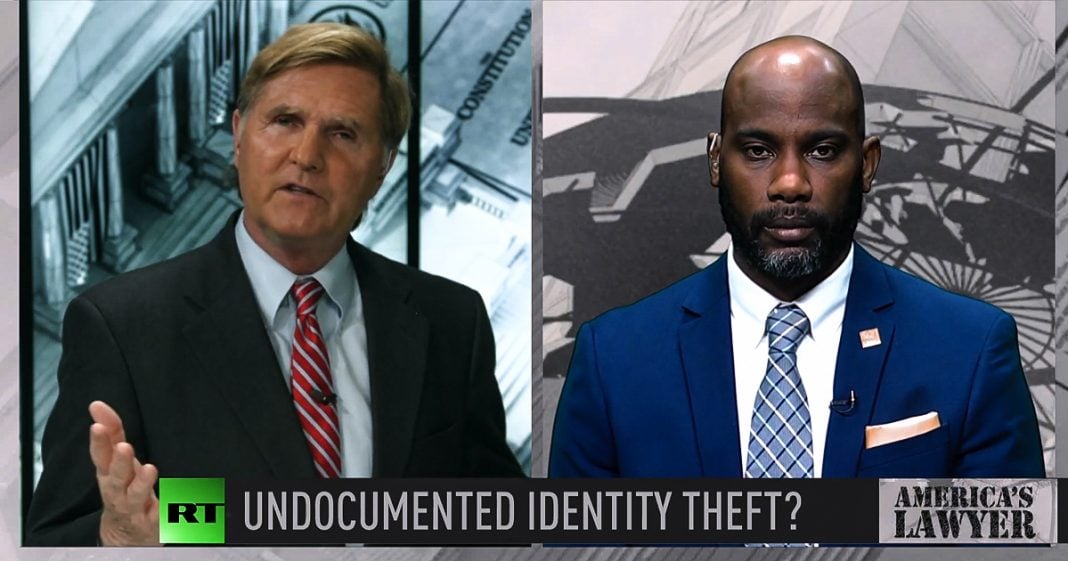 Via America’s Lawyer: Mike Papantonio is joined by the VP of the American Immigration Lawyers Association, Allen Orr, to explain how a U.S. Supreme Court decision will give states greater authority in criminalizing improper work documentation filed by undocumented immigrants, going so far as to prosecute them for identity theft when seeking employment.

Mike Papantonio:             US Supreme Court has overturned a Kansas ruling involving the prosecution of undocumented immigrants using false social security numbers when they apply for work. This is going to open the door for States to more aggressively crack down on immigration. We’re joined now by Allen Orr, vice president of the American Immigration Lawyers Association, and an all around very smart, very smart lawyer, has done a lot to help American, help immigrants all over this country. Allen, how are you?

Mike Papantonio:             Now, first of all, could you tell us a little bit about Kansas? You know what, the way I understand this is it’s a preemption, what we would call a fight on a preemption issue, which is the, what, what is the relationship between a state’s right versus the federal preemptive right to preemptive orders. That’s kinda what this is coming down to, isn’t it?

Allen Orr:                                Right. Well, exactly. It’s coming down to federalism and an understanding of who enforces immigration laws. Is it a federal issue or is it a state issue? And when there is written context within federal statutes with regards to what form and the information on that form can be used for, can States use it for something else? That is specifically what it sort of narrows down to.

Mike Papantonio:             So Kansas said, look, we have the right to criminally prosecute if we have laws that put these, that say that this particular person did something wrong. Yes, we’re familiar with the fact that the feds have some involvement in this arena, but we haven’t lost our right under, under what we call health, safety and welfare protection of our citizens to do what we wanted to do. So what they’ve done is they’ve said to immigrants, what, what are they saying to immigrants right now?

Allen Orr:                                So I think it’s a far stretch to just talk about the facts of the case, specifically. In this case, these three individuals were pulled over for a traffic violation. So it wasn’t an audit procedure at a company to see if the checking the company documents with the, what the government can do at any level, which is sort of relegated to the federal government. And then they sort of went and found these documents and then they added on this charge. And people being here undocumented is a civil violation, right? Some, and in most States when you validate an identity, it is a felony. So it is a work around to give States the ability to sort of enforce some type of immigration law because charging them with that felony would make them automatically deportable.

Mike Papantonio:             So what we have here is we have, it’s kind of a Bonanza to go after immigrants on issues like, you know, I used this, this ID because I needed work. I needed to use a, I had to use a social security number because I needed a job to support my family. And they’re saying, well you shouldn’t be here to begin with, so we’re going to use this element of violating the law really as a reason to send you back to where you came from. Up until this ruling, how has work authorizations for undocumented immigrants been handled by our court system, up until the time that this Kansas case has been tested by the Supreme Court?

Allen Orr:                                Right. So this case is specifically about the forms. So generally the local state enforcement officers would not use I-9 form to enforce some kind of state rules such as the sort of identity fraud rules. It would only be the federal government that would come in either through an audit or through some kind of enforcement action to sort of get these documents and sort through them for the company.

Mike Papantonio:             You know, Allen, as I look at this, you remember, you know you’re dealing with con law at the time, constitutional law at the time. And we’ve talked about on this program, sometimes when a state aggressively goes after the argument to say, look, we respect the federal government. We know you have your rules, but we have our rules too. And our constitution, our state constitution says above all things where it comes to the States, right, we have a right to protect health, safety, and welfare. Now, what I’m seeing, what I’m seeing is a pattern. I’m seeing the Supreme Court, this is, this is a series of immigration cases that we’re seeing right now. And the Supreme Court is saying, yes, you’re right State, you have this right under health, safety and welfare protection. It seems to be expanding, doesn’t it?

Allen Orr:                                Yeah, well, if you see in these immigration cases, as you’ve already said, there’s a number of them and they’re all 5-4 which falls along political lines, which sort of tells you that immigration has now become a political football. But in this specific case, what they did was they’ve also expanded the scope of an employer’s liability under these same rules. So now the employer that takes that information and knowingly provides it to that state on some other form, right, knowingly doing so, is also now involved in this sort of identity fraud co, you know, scheme and therefore should also be subject to these federal penalties.

So I think that’s the undergirding from the legal analysis of how it sort of follows that I don’t think they sort of saw in this case. What they saw in this case was now we’re going to be able to get these immigrants and be able to deport them quickly and to sort of get them a felony crime. Because once again, I want to state that the underlying document issue here has a deeper penalty than actually coming to the United States without documents. One is civil, the other is federal.

Mike Papantonio:             Yeah. Allen, I’ve interviewed you before and I remember my last interview you said that as we expect to see conservative courts are going to further enable the, not only federal government, but they’re going to enable the state governments to figure out ways to say, you shouldn’t be here. You came here illegally and now we’re going to find ways to, to, to turn all that around. This is one of those things. Your, your statement, I think last time we talked is we expect to see this expanding more and more at the state level and at the federal level. You see that as, as what’s unfolding here, don’t you?

Allen Orr:                                Absolutely. Our problem is immigration is relegated to a federal issue and for whatever reason our Congress is broken, right? The Senate has not moved on any bills from the immigration. They haven’t worked on immigration in 20 years either party. Right? So this becomes a football and it goes to the States to sort of now sort of say, we’re going to do what we want to do here, which then makes greater disparity because these foreign nationals that are in one state that are enforcing it and other States aren’t, are just going to move to the other state. When in fact, we both know if someone’s using someone else’s social security line, that it is not a hate crime in that sense, because basically what they’re doing is paying taxes for someone else to get benefits for in the future.

Mike Papantonio:             Yeah, let me make a prediction. Somebody’s going to be smart to make, smart enough to raise the commerce clause here somewhere in this argument, but we’ll talk about that another day. Allen Orr, thanks, thanks for being out there on behalf of people who need your help.