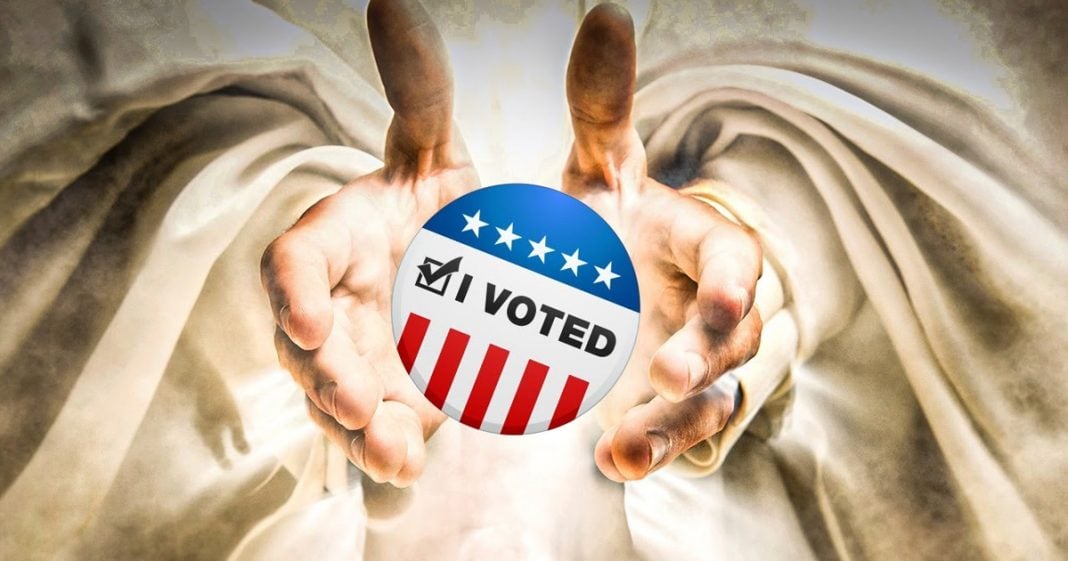 According to new research from Pew, nearly one-third of Americans believe that God has a hand in choosing who are president will be, although the number is slightly lowered for Trump. Americans have a difficult time separating their faith from the rest of the world, and they believe by too large a margin that God is picking award winners, sports team championships, and even the President. Ring of Fire’s Farron Cousins explains what’s happening.

Is God a Democrat or Republican or maybe God’s a member of the green party? Perhaps God is a libertarian. The truth is, folks, it doesn’t matter what political party your God is subscribed to because regardless of what party they’re in, a third of Americans believe that, that God, their God, your God, whoever’s God is picking American presidents. According to new data released by Pew Research, roughly one third of people in this country believe that God herself has their hand in picking the United States president. 27% of people in this country said that God did in fact choose Donald Trump to be the president of the United States. Most of them because it was based on policies. So God up there in heaven looking at Donald Trump’s policies says, you know what? I like that. I like where this guy’s going with the whole wall thing. Let me go ahead and cast my vote for Donald Trump.

Probably a mail in ballot. I don’t think God came down here and voted in person, obviously. Almost 30% on the other side say that God chose Barack Obama to be president of the United States. So it’s not only limited to the Republicans on the right who think that God is swaying American politics. Those on the left we got, you know, almost a third of us too think that God is making all this happen or making this not happen. And that’s the more important thing, folks. If God is choosing one candidate over the other, that means God is telling us that the other candidate is bad. And if God is involved in politics in this way, he must be involved, she must be involved, in everything else too, right? You know when you see those people get up on stage with their Emmys and the Grammys and the Tony awards and they say, I want to thank God first and foremost.

You think God’s actually up there in heaven saying, I ain’t got you bud. I did that for you. You’re welcome. You know, when you see the winning team of the Superbowl say, I just want to thank God for this. You think God’s up there saying like, heck yeah, Tom Brady, I got you another one coming next year too? No, that, that doesn’t happen, folks. I don’t care if you do believe in God or if you don’t believe in God. The Bible does tell us human beings were given free will, right? We know that. That’s a thing and whether or not you believe in God, humans still have free will. God is not up there guiding American politics and ignoring all of the other countries on this planet.

Do you think a God would pick a president of the United States who wants to put kids in cages and that applies to both Obama and Trump? No. That is a stupid thought to have. Do you think God chose the Saudi family to oversee all of the human rights abuses over there? No. Again, that’s a stupid thing to think. You think God picked Vladimir Putin to be president essentially for life of Russia? No. Again, that’s stupid. Believing in God in and of itself is not stupid. I fully respect everyone who has a religion who sticks with it and who believes it. But if you think for a second that any higher deity out there is interfering with the United States and the United States alone and our policies and our sports and our award shows, maybe it’s time to rethink your religion because I can promise you that ain’t happening.