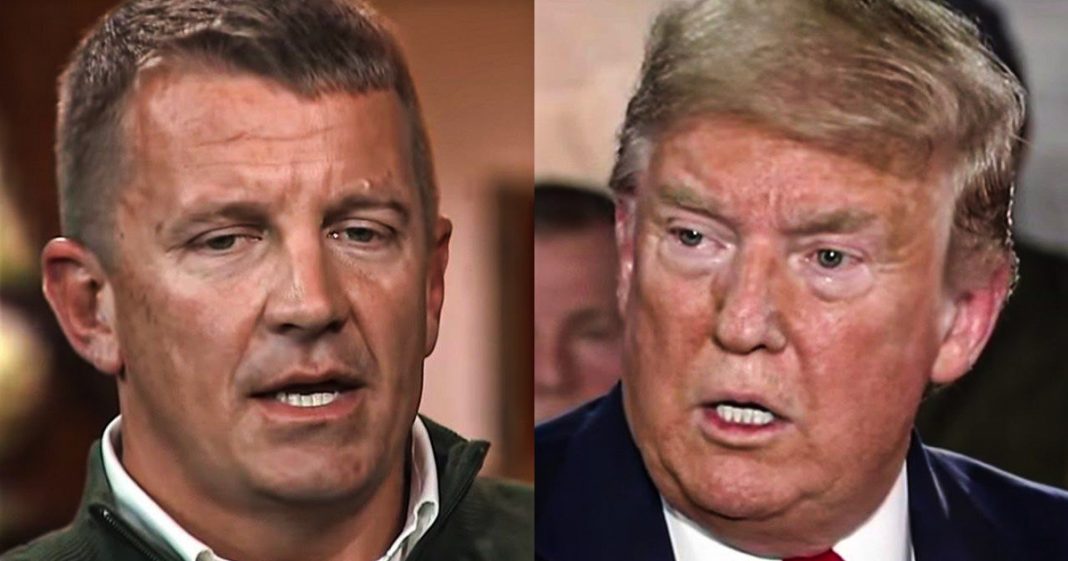 Trump’s good friend Erik Prince has been caught hiring former spies to infiltrate liberal organizations to dig up dirt on them ahead of the election. Sadly, this practice has become common for Republicans and has been going on for more than a decade. Ring of Fire’s Farron Cousins discusses this.

An exposé by the New York Times earlier this week has revealed that Erik Prince, the former director of Blackwater worldwide, the brother of education secretary, Betsy DeVos and an informal advisor to Donald Trump himself has been running a scam where he has been hiring former spies, both American and British to infiltrate liberal groups here in the United States, labor organizations, and really any other left wing organization in this country that he feels might be a threat to Donald Trump. According to the report from the New York Times, Erik Prince has been doing this, or at least got the idea back in 2016 long before the election actually took place. So in 2016 Eric Prince teamed up with Project Veritas and James O’Keefe and he had these former spies go work with Project Veritas. They got them involved in these organizations, undercover hidden camera type sting operations out there trying to dig up dirt on these groups to make them look bad.

They reported it back to Project Veritas, gave them all the footage and then they moved on, changed their alias and went to infiltrate another group, according to the New York Times. Now, one of the groups that they infiltrated was one of the largest teachers’ unions in the country, the American Federation of Teachers. So this isn’t just politically active groups, this isn’t, you know, infiltrating left wing talk shows or, you know, congressional campaigns, which they also did though by the way, they’re going after the teacher’s unions too. Anything they feel is a threat to Trump or the Republican party, they were trying to put people inside to dig up dirt on the organization and those running it. I have to read this quote. This is phenomenal. This is from the New York Times.

Mr. Prince appears to have become interested in using former spies to train Project Veritas app, operatives in espionage tactics sometime during the 2016 presidential campaign. Reaching out to several intelligence veterans, Mr. Prince said he wanted the Project Veritas employees to learn skills like how to recruit sources and how to conduct clandestine recordings among other surveillance techniques. The good news is that now they’re busted. Now we know that this is happening and we know that Project Veritas was right there involved with Erik Prince, but there still remains a lot of things that are unknown. For example, Erik Prince has been a good buddy to Donald Trump and his sister is serving in the administration, Betsy DeVos, that’s his sister. Did Trump know about any of this? Did Trump direct any of this? Did anyone else in the White House know that this was happening? Who was aware and how long have they been aware and you can’t tell me that the answer is nobody. That’s just improbable at this point. Now, the even sadder fact though, folks, is that things like this had been going on for a very long time. Erik Prince did not invent this technique.

We have seen this happen from Koch funded organizations. We have seen it happen from groups funded by the US chamber of commerce sending people out there to spy on reporters, to spy on labor unions and yes, even to spy on trial lawyers in the United States. This has been going on for well over a decade in this modern era, and it’s not going to end anytime soon just because the New York Times exposed one group doing it. They’ll regroup, they’ll come up with new strategies and they’ll send their people out there once again. But these are the kinds of dirty tricks that we are up against and we have to fight back. But unfortunately, we do not have an apparatus here on the left that is funded by multibillionaires that’s able to do something like this. So my advice, take caution, be careful what you say and just for safety sake, pretend that everything you say is going to be on camera. Because if you do that, and I hate to advise people to live in fear, but if you do that, maybe you can protect yourself and not end up on one of those Project Veritas viral videos saying something incredibly stupid because you didn’t think you were being filmed. An ounce of precaution could save you in the end.