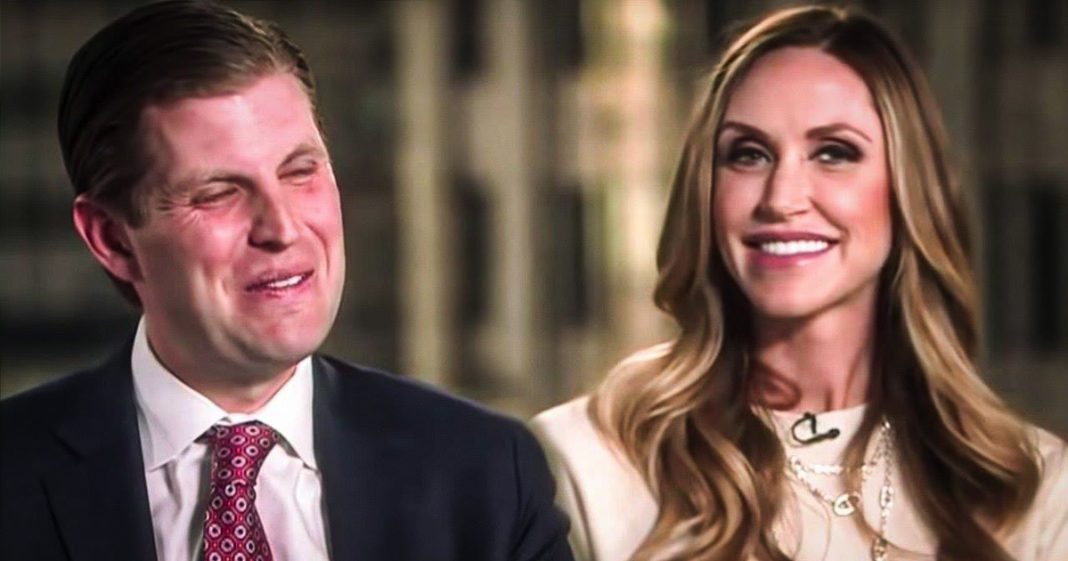 A new report by The New York Times has revealed that the Trump campaign is having to pay both Lara Trump (Eric’s wife) and Kimberly Guilfoyle (Don Jr.’s girlfriend) to do campaign events for the President. This seems a little unusual, as most people aren’t paid to be at events, unless they are part of an act being performed. Or maybe that’s exactly what is happening here? Ring of Fire’s Farron Cousins discusses this.

Earlier this week, the New York Times put together a massive report on how the Trump campaign led by Brad Parscale of Parscale Strategies has absolutely managed to take over the entire Republican party apparatus. Everything from fundraising, through the data, reaching out to folks. Parscale has absolutely taken all of this all over and it’s left a lot of people, specifically the old money in the GOP, you know the, the Koch brother because it’s no longer plural now. And all these old guard Republican groups are not happy with this. They’re not happy that Parscale has taken over and that Trump has essentially taken over. And it’s a fascinating article but it’s a lot of stuff we all already knew. But there was one thing reading this article that, that really struck out, stuck out to me and I’m going to read it for you. These two paragraphs are absolutely phenomenal. According to two people with knowledge of the matter.

Parscale Strategy has also been used to make payments out of public view to Laura Trump, the wife of the president’s son, Eric and Kimberly Guilfoyle, the girlfriend of Donald Trump Jr., who have been surrogates on the stump and also taken on broader advisory roles. Their presence makes for an odd dynamic between a campaign manager and a candidates family. During a campaign appearance last summer in Orlando, Ms. Guilfoyle confronted Mr. Parscale asking why were her checks always late? Two people who witnessed the encounter, said a contrite Mr. Parscale promised that the problem would be sorted out promptly by his wife Candace Parscale, who handles the books on many of his ventures. All right. Honestly, Guilfoyle I can understand the fact that you have to pay her to show up to these events with her boyfriend. But Laura Trump? I mean, she’s married into your family. Like, you’re kind of locked in at that point.

You should have to go to these events whether you want to or not without getting paid. But this is disgusting. Parscale Strategies has billed the RNC about $35 million for advertising and, you know, data mining and paying the Trump family women to appear at events. I mean, if you really cared about the person you’re married to or the person you’re dating, you would do this without having to be paid for it. That’s kind of disgusting, but it also gives us a very clear picture of what you’re all about and why you’re in this relationship to begin with. I’m sorry folks, but that’s the way it is. Now, what’s also odd about this is not just that, oh, you’re a family member. You shouldn’t be paid. Most people who show up and just do campaign events don’t get paid for it unless of course it’s an act, right? If you have a musical act, typically they want to be paid. If you have some kind of performer, typically they want to be paid. But just to show up and do a quick rally, you don’t get paid for that. But the Trump women, absolutely and as this little article points out, if you’re late on that check, you can expect all hell to break loose, at least with Ms. Guilfoyle.