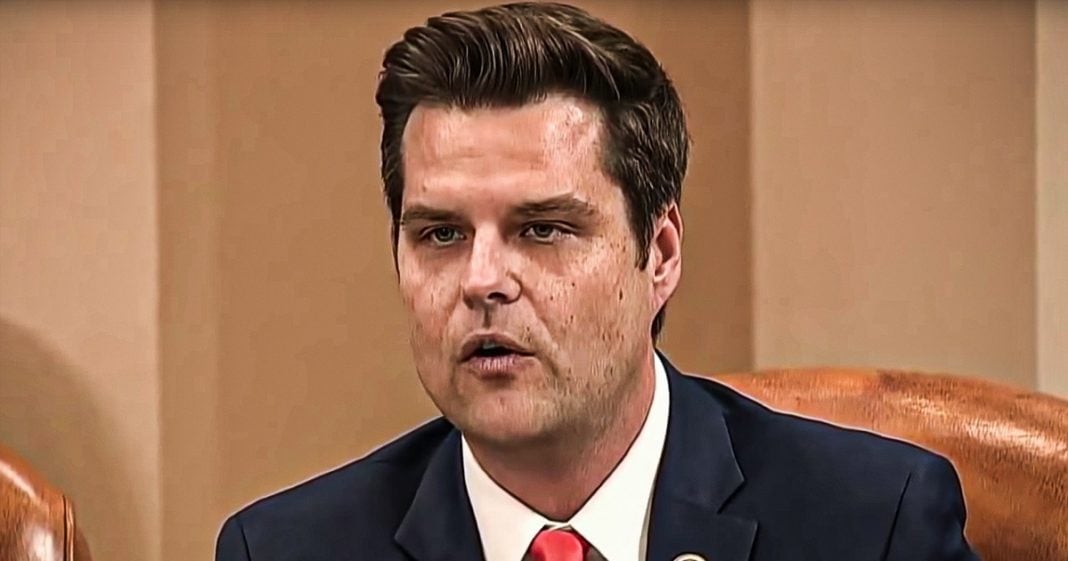 Republican Congressman Matt Gaetz doesn’t want Florida’s worker to have paid sick leave, even though he’s currently self-quarantined due to exposure to the virus. Gaetz voted against letting Floridians have paid sick leave while he was a state representative, proving again that this man does not have the best interest of Florida residents in mind. He needs to go, as Ring of Fire’s Farron Cousins explains.

Republican Congressman Matt Gaetz is enjoying his time of self-imposed self quarantine. Even though he has been told by a doctor that he is not infected, he does not have any symptoms. You know, his test came back negative. This virus does not live in Matt Gaetz’s body. But he said out of an abundance of caution, he was still gonna carry out his 14 day quarantine, even though there’s literally no reason to do it. Although Matt Gaetz is able to do it because he gets paid sick leave, right? $174,000 a year is his congressional salary and he doesn’t have to worry about missing two weeks of work. He doesn’t have to be afraid of getting fired for not showing up to work. He doesn’t have to be afraid of losing pay for not showing up to work and that’s why he’s able to take this extended quarantine vacation even though he doesn’t need to do it.

But Matt Gaetz does not want you to have those same rights. He doesn’t want you to have those privileges of being able to take off work when you are sick and still get paid. Many years ago, back when Matt Gaetz was just a lowly state representative here in Florida, he voted against a measure that would have allowed cities all throughout the state of Florida and districts to impose sick leave policy. Basically, Matt Gaetz said, hey, listen, I know you guys want to do this on your own and you should have every right to do it, but we’re going to pass a bill that’s going to prohibit you from giving your employees paid sick leave. That’s what this was, folks. It wasn’t a bill that would have mandated paid sick leave. All it would have done was give cities and districts the ability to mandate paid sick leave, but even that, even that was too much for Matt Gaetz currently enjoying his paid sick leave. That’s disgusting. This man is disgusting. Everything about him, everything about his history.

But as Lee Fang over at the Intercept pointed out, this was actually an ALEC sponsored bill that had been done in several other States. It made its way down here to Florida. Gaetz was more than willing to side with ALEC and the major corporations who were pushing this legislation, which included the Disney corporation here in Florida. Huge employer, didn’t want to have to pay people paid sick leave, and Matt Gaetz said, sure, Mickey, whatever you want, I’m your guy. So even though he’s enjoying the fact that he doesn’t have to worry about his job security or his pay, Matt Gaetz doesn’t want to extend the same benefits and privileges to you and he is not alone, folks. We saw Republicans earlier this week in the, in the Senate, vote down a measure that would have guaranteed paid sick leave for at least 14 days for everybody in this country, they don’t want it. They want to use it when they get sick, they want to take advantage of the system. They just want to make sure that you average American citizen do not have the same rights that they do because just like animal farm, all are created equal, but of course some are more equal than others.