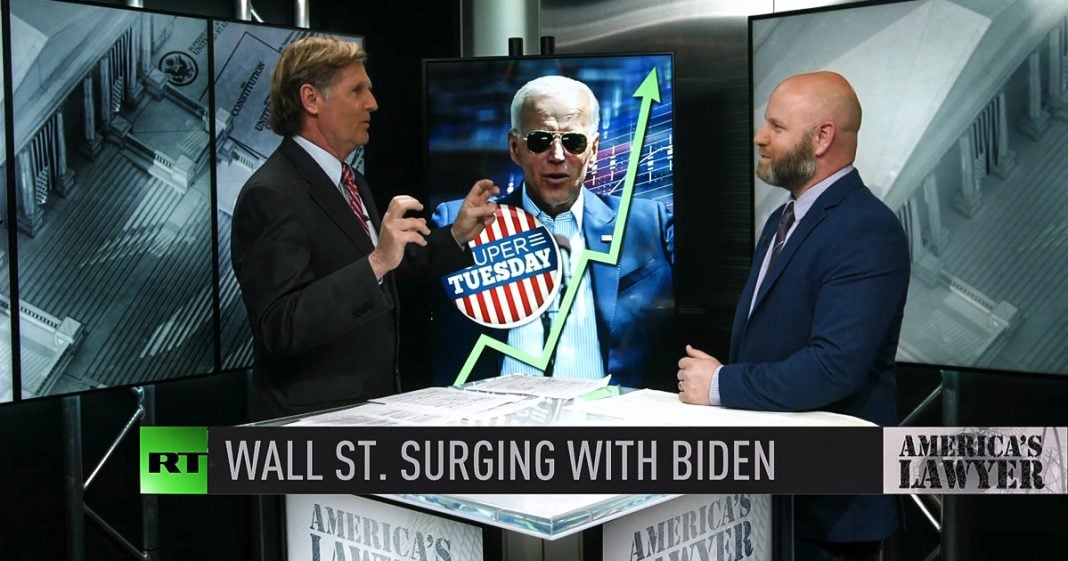 Mike Papantonio:             Wall Street is in party mode now that Joe Biden is the front runner in the Democratic race because they know that if he gets the nomination they have nothing to worry about. Do they Farron? We got Farron Cousins from trial lawyer magazine to talk about this. What’s your take on this? It was like party on Wall Street. They were, they were popping champagne corks and this, you know it was just so obvious that they love this guy because they know he’s not going to change anything for them, right?

Farron Cousins:                  Right, we went through days and days of just the stock market tanking because of COVID-19 and then suddenly Joe Biden first gets the endorsements from Klobuchar and Buttigieg and at that point the healthcare stocks on Monday of last week took off. Super Tuesday happens, market opens Wednesday to a huge rally and these investors, the economists, they all say it’s because of Biden’s victories and some of them, some of them who run the financial houses out there actually said this happened because Joe Biden is not going to change things. He is not going to regulate us. He is not going to tax us. We know that with Joe Biden, there’s a big payday around the corner.

Mike Papantonio:             Okay. We saw it, if you think back, we saw it with Obama. We, of course Clinton, Bill Clinton invented this whole Wall Street relationship. Remember? He came out and said, look, Democrats can’t win unless we start this love affair with Wall Street. From that point on, consumers started getting hammered really bad. Under Obama we’d like to think, well that changed. It didn’t change. The reason they liked Obama was the same reason they like this guy, this same reason they like Hillary. What, what they’re really saying is that their term is, he’s middle of the road.

Mike Papantonio:             What that really means is he’s not gonna change anything. He’s going to get us, let us get away with the same scams we’ve always gotten away with. There’s not gonna be any regulation. Nobody goes to prison when they commit, when white collar criminals, when they, when they engage in the worst conduct. We saw that with Eric Holder, he just let them all go. What’s your take? Where does it go now that Biden’s a kind of a front runner for the Democrats?

Farron Cousins:                  Well, honestly, it’s really terrifying. If we get to a general election that’s Biden versus Trump, Wall Street has nothing to worry about. You know, the, the wealthy elite have nothing to worry about because they know that whoever wins at that point, their lives don’t change. The regulations don’t change. The rules don’t change and they’re all set. But Bernie Sanders and his supporters understand that and they saw these rallies. They knew why it happened. There have been tons of articles in just the last week about why it is, and they’re out there doing their best, trying to warn people that this is not okay. If something makes Wall Street, you know, the, the defense contractors, their stocks went up. If their stocks are going up, you should be concerned because that doesn’t end well for the American public. We know what that means.