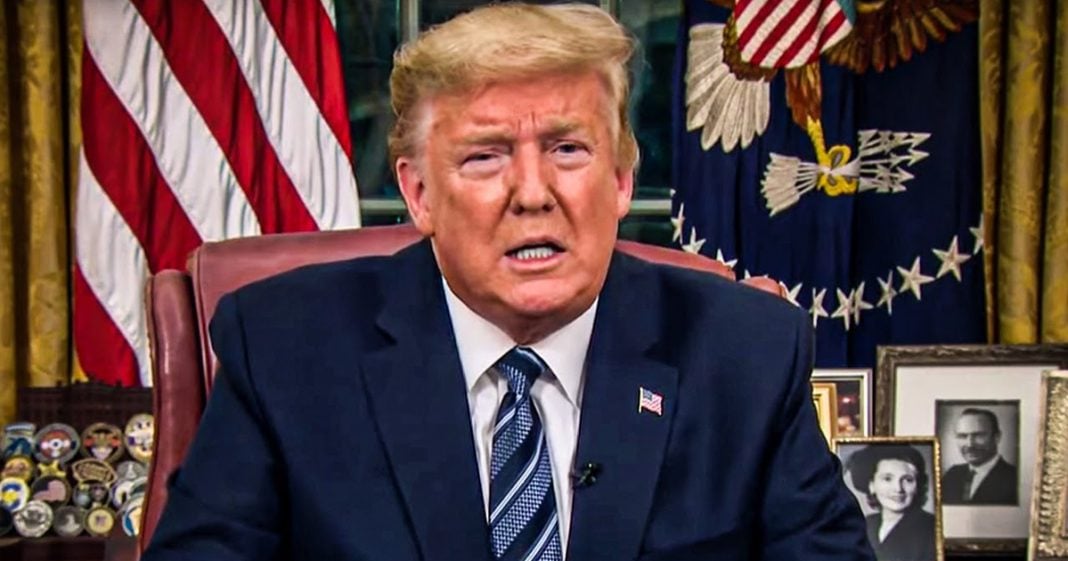 Donald Trump tried to ease the country’s fears about the pandemic on Wednesday evening, but instead, he ended up sending the world into a full blown panic that sent stocks tanking early Thursday morning. Everything this man touches turn to garbage, as Ring of Fire’s Farron Cousins explains.

So last night Donald Trump took to the airwaves to try to calm everybody in this country about the growing fears of the pandemic and he also wanted to calm the fears of investors on Wall Street, which is really what most of that speech was directed towards. You know, he offered a couple of solutions, said he’s going to, you know, try to get paid sick leave for every American citizen. Insurance companies are going to cover this thing, don’t worry about it. And of course we’re going to offer up some capital to small businesses and investors, things like that, you know, have some more money, rich people. Unfortunately for Donald Trump, not only was he lying about most of these proposals, but the stock market knew it too and before it even opened this morning, stocks were tumbling across the planet. You had global stocks, tank. You had securities, treasuries, tanking. You had Bitcoin tanking. Cost of oil, tanking, and investors on Wall Street all said, it’s because Trump did not do enough to calm the fears of investors.

Now, I don’t care about investors, to be perfectly honest, I don’t care about Wall Street and the stock market all that much either. The stock market is a human construct that we essentially built to be able to give corporations more money so that they didn’t have to borrow it from the banks. They’re borrowing it from us and they stand a good chance of losing it for us too. This country would be just fine without the stock market, but that’s a conversation for a different day. But about Trump’s speech, right? Why were investors not pleased with what he said? Well, let’s start at the top. First of all, he lied about what insurance companies are actually going to cover at no cost. This is not socialized medicine. This is not a Medicare For All plan for one disease. No, insurance companies are saying they may waive the copays for testing, but they’re not waiving anything for the treatment of this virus.

Nothing, and Trump said they were going to cover it all. So he lied about that. And insurance companies had to come out later on and correct him and say, yeah, we’re, we’re not just giving this away for free, folks. We can test you for it, but we’re going to charge you for the treatment. So that didn’t do very much. The travel ban, right? Oh, you can’t go to Europe for 30 days with the exception of the UK. Also, it only applies to foreigners. American citizens can come and go as they please. Sure, why not? Bring the virus back with you. Also, you can still order goods from Europe. So the people packing those up. Let’s hope that they don’t have the virus and accidentally sneeze in your package and send it over here. Right? So that didn’t do anything to calm the fears. His paid lick, sick leave. He said he’s going to do it, but he hasn’t done it yet. So maybe that’s a thing that’ll happen. It would be a good if he does, but given the fact that he lied about everything else in the speech, we have no reason whatsoever to think he’s actually going to do this.

And of course, the tax cuts. The opening up of capital, the possibly 0% payroll tax. Will corporations finally understand that, you know what? Sometimes you can’t tax cut your way out of a problem, and that’s not going to do anything to prevent Americans from becoming infected. It is not going to do anything to ease the fears of the investors. We’re in for a rough couple of weeks, at least with the market. So if you have money in that, you may want to consider putting it, into a more safe investment for the moment because things are going to get wild. They’re going to be good days, and there’s going to be very, very, very bad days. So if you have your pension wrapped up in that, which I know many American citizens do, most of the stocks are actually owned by the already wealthy. So I’m not too concerned about them. But if you working class American, have your money in the stock market now may be a good time to consider moving it. Speak to your financial advisor. Trump is tanking the whole thing because he is painfully incompetent at his job.