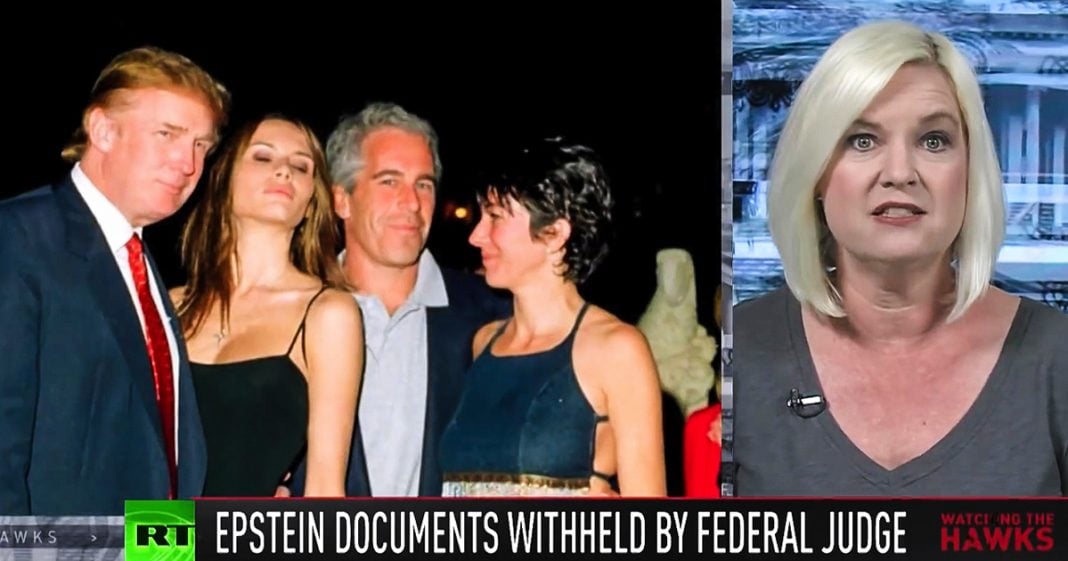 Via Watching the Hawks: Legal journalist Mollye Barrows joins Tyrel Ventura and Ameshia Cross to break down the latest twist in the Jeffrey Epstein case.

Tyrel Ventura:                     Victims and journalists seeking justice and trying to unravel the mystery behind the Jeffrey Epstein case suffered a major legal setback in recent weeks as a federal judge rejected an appeal from the Miami Herald to release documents that were pertaining to the case. These are very important documents. Investigative journalist Julie K. Brown and the Herald were seeking papers that involved the court proceedings between Epstein victim, Virginia Giuffre and Epstein’s friend and alleged groomer Ghislaine Maxwell. The documents that many believe contain brutal details on various world leaders and high profile individuals who allegedly engaged in the systemic rape of underage girls on Epstein’s private jet and Island. Joining us now to help us better understand why the judge ruled against releasing the documents is legal journalist and investigative reporter Mollye Barrows. Mollye, thank you as always for coming on.

Mollye Barrows:                Well, it was a four page document. The Miami Herald characterized it as basically mocking, but she gave the same reasons that she did the first time. That essentially that the case those documents concerns has already been settled and there’s no relevant reason to the judicial decision making process, including the public’s right to know, that would justify releasing them. So attorneys for the Miami Herald had supported Virginia Giuffre’s legal team in making those records public in order to identify people who they say enabled this sex trafficking ring that made Epstein so incredibly popular across the globe and made him tons of money as well, but Giuffre, an alleged victim of Epstein’s teenage sec ring, sex ring years ago had filed a civil complaint, a defamation complaint against his longtime girlfriend who she said was also her groomer, Ghislaine Maxwell in 2015 and of course in her accusation she says Maxwell groomed her when she was only 15 to be a sex slave.

And she said she was basically trafficked around the world to high profile people, including Prince Andrew among a number of others. And they believe that there are many more motions, many more names that would identify more people that were involved in this and both the Miami Herald and Giuffre, were trying to speak on behalf of victims who they say didn’t really get a fair shake. They got a raw deal. They’ve never had a chance to really face their accusers in, in court. Of course we all know Epstein’s passed now, but, they wanted to have these names public so it would basically put a stop to any future criminal activities that these people may have been involved in or continue to be involved in.

Mollye Barrows:                You know, I guess you should never say never because Preska, the judge in this case, said some of the documents could be released on a case by case basis if an argument could be made basically successfully that they should not remain sealed. But this has been such a back and forth for some time. She isn’t the first judge of course, to take a look at these particular controversial documents. Her rulings support one of the initial rulings in sealing these documents, if you will, and that judge has since passed. So she’s continued to uphold those rulings. But, you know, you have the, the ninth circuit court of appeals in San Francisco that basically made an opposite ruling and that was what the Miami Herald attorneys were arguing. They say, hey, you know, we understand that you didn’t want to make these, this trove of documents public. We feel like the public has a right to know. We think it’s an issue of public safety and essentially the ninth court, circuit court of appeals said we think they should be public too and they brought that up to Preska and she says, I don’t care what the ninth circuit thinks. I’m saying no.

Mollye Barrows:                I know and apparently it’s just a treasure trove. There were a lot of unsealed motions, I mean motions that hadn’t been followed up on. They wanted to unseal those. Any number of basically documents are re, related to the original investigation into Epstein, which we all know originated in Miami. It wouldn’t even have come to light if it weren’t for the Miami Herald looking into this. And there were a lot of questionable actions that were taken on this case from the beginning, including the fact that initially these documents, this entire case was sealed under a higher level of government seal, basically, that was almost used in spook cases, if you will. So that level of secrecy was removed and so that’s why you had some of these files come to light.

But a great number of them still remain in the dark, if you will, and that’s for the exact reason that you would suspect and why the legal team for both Giuffre as well as the Miami Herald wanted them released because they say it contains the names of high profile government leaders as well as celebrities who allegedly traveled with Epstein on his jet to have sex with these teenage girls, as well as his property on the Virgin islands. And according to the Miami Herald authorities there just last month brought a civil enforcement action against Epstein’s estate saying that this disgraced financier and his lawyers ran a criminal enterprise. So that sure smacks of, you know, sex trafficking and they were making money off of it and a lot of important people were associated with that and they sure don’t want their names out there. And it looks as though the court is helping them hide.

Mollye Barrows:                Well, they say they’re going to continue to fight for the truth and, you know, this initial case involving hers was settled in 2017. They filed this additional, you know, defamation case, and it’s been going back and forth with her, this particular defendant, Giuffre, as well. So I think they’re just going to continue to fight to get the information out there. They may have to try a different approach, but for now this particular approach is, is gone because essentially Preska denied their motion to reconsider her decision. So unless they have a new reason or new evidence comes to light as to why these documents should be released, they’re going to have to find a different angle to approach this case.