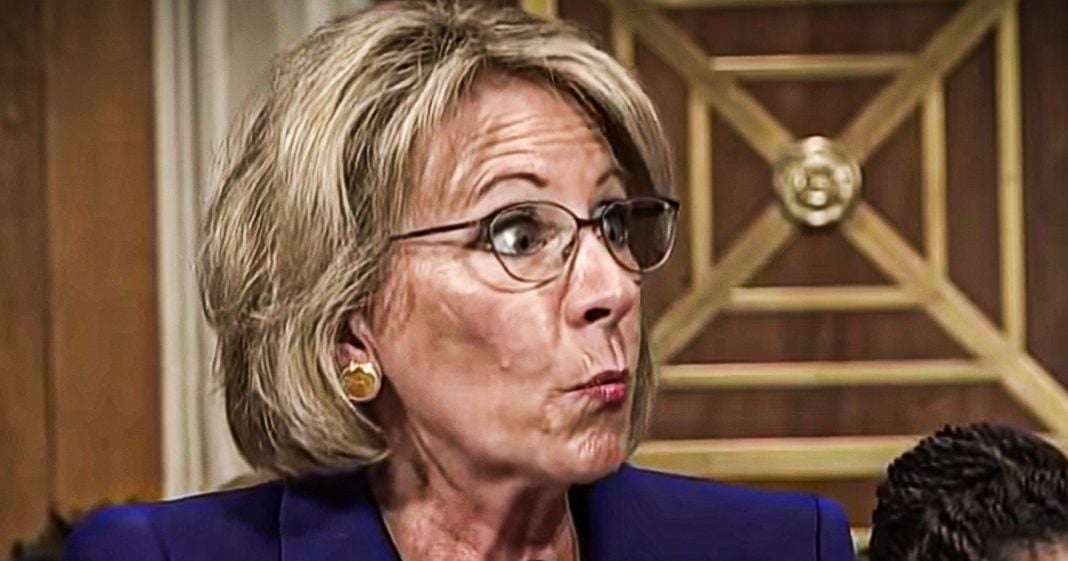 Republicans and Democrats in the Senate came together this week to smack down a rule from Betsy DeVos’ Department of Education that would have prevented defrauded students from having their student loan debt cancelled. The Obama administration had put a rule in place to forgive these loans, and DeVos has spent most of her tenure trying to destroy it in order to screw over borrowers who had been scammed. Ring of Fire’s Farron Cousins explains what happened.

Yesterday, 10 Republicans in the Senate joined with nearly all of the Senate Democrats. Not all of them, but most of the Senate Democrats, to tell Betsy DeVos that her greed and incompetence is no longer acceptable and they’re not going to stand for it. Specifically, they voted to destroy a measure that Betsy DeVos has been pushing for three years now to undo an Obama era rule that essentially forgave the student loan debts of college students who went to a for profit college only to find out that they had been scammed. DeVos originally finally put her proposal up in 2018 after spending about a year working on it, it got shot down then. She went back, retooled it for two years and released it not that long ago and the House already voted on a measure saying, we’re not going to accept DeVos’ rule. The Senate got to vote yesterday and 10 Republicans had enough courage and enough sense to join with the Democrats to stop this thing and pass a bill preventing DeVos from being able to do this.

Now, as I mentioned, Obama’s plan said, listen, if you got scammed into going one of these a for profit colleges and you had to take out loans, now you’ve got a degree that’s worthless. We’re going to forgive your loan debt. DeVos said, now hold up. I don’t know that we want to do that because she called it a quote, free money for people and Betsy DeVos, the billionaire by the way, doesn’t like free money for people. So she said, first we’re going to get rid of the program altogether. That didn’t work. And then she said, okay, well we’re going to tighten, tighten the requirements here. You student who was scammed, have to be able to prove that you personally got scammed and because of that scam, you went to that college and took out those loans and that’s almost impossible, folks. Because yes, we know that these for profit colleges were scams.

They lied to the students, they lied about enrollment, they lied about success after graduation. They lied about the value of the degree. That was a scam and we know it and they told it to these students. But if that student can’t prove somehow that that is why they went to that college under DeVos’ plan, they would not have had their debt forgiven. Now, can you prove that you went to a certain college because of a certain reason, folks? Do you have it in writing? Do you have documentation saying that this particular reason is why you went to that college? I’m willing to bet, no, you don’t. Unless it’s a letter saying, hey, this is Harvard here. We’re giving you a full ride. You want to come? Yeah, that would be considered documentation. But the college I went to, I don’t have any documentation showing why I chose this college.

It wasn’t a scam, by the way. I didn’t go to one of those, but I couldn’t prove why I went to my college. You see what I’m saying? DeVos made it nearly impossible by doing something that most people would say, well, it’s easy to prove why you went to the college. It’s actually not, not to prove it, you don’t really have documentation of that. And so again, the Senate yesterday said, yeah, we’re not going to tolerate this, Betsy. Quit trying to make this happen because it’s never going to happen. Now, Trump has said he remains neutral on this issue. I don’t buy it. So these bills now go to Trump’s desk. He could veto it, he could pass it, but Senate Democrats are hopeful because they said, well, we found 10 to side with us yesterday. I’m pretty sure we can find another 10 to override a veto and for the sake of these scammed students, I hope these Democrats are right.