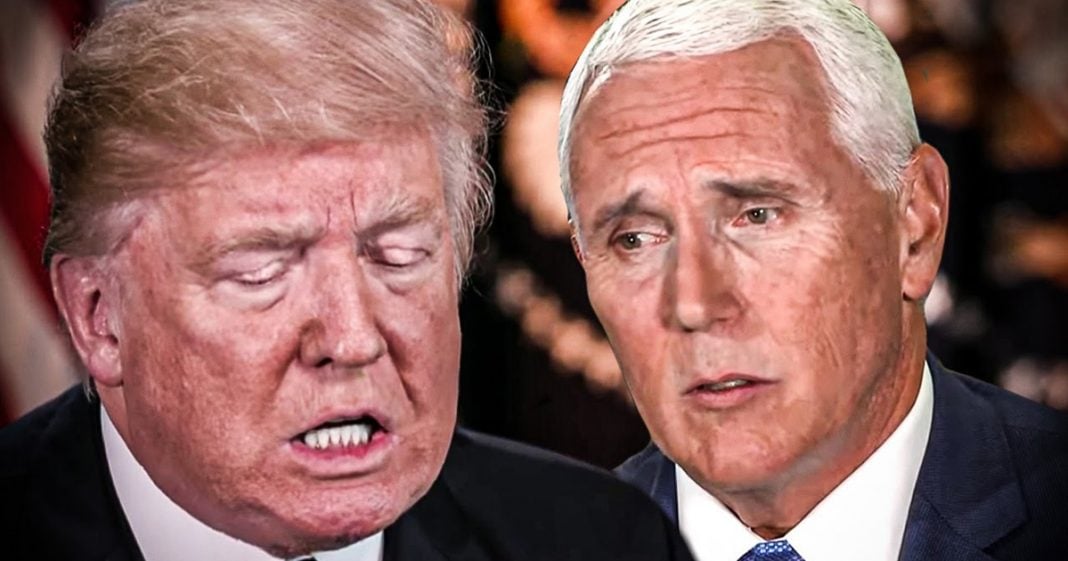 Mike Pence has long been known as a science-denier, but his refusal to accept science and to listen to those in the medical field could cost him greatly. Pence admitted yesterday that both he and Trump are going to ignore the advice of doctors and will continue to shake hands and embrace voters this year. This could have deadly consequences, as Ring of Fire’s Farron Cousins explains.

As the Coronavirus continues to spread across the United States, doctors, health officials and even government officials have warned people, stop shaking hands. You know, stop unnecessary touching, for the love of God, do not touch your face. And yesterday Mike Pence, who is in charge of the Trump administration’s Coronavirus response did a little press conference where he said, me and Trump are going to ignore all that medical advice. We’re going to go out there and we’re going to, well let me, you know what, I’m just going to read his quote here. As the president has said in our line of work, you shake hands when someone wants to shake your hand and I expect the president will continue to do that. I’ll continue to do it. What this is, is a broad recommendation for Americans, but a really good recommendation is to wash your hands often.

So Mike Pence and Donald Trump, two science deniers. I mean, Pence is the guy who once said that, I don’t think tobacco smoking causes cancer. I don’t think it kills people. These two scientific geniuses are once again ignoring the advice of the medical community and saying, nah, we’re still gonna do this. We’ll just, you know, we’re going to try to wash our hands as often as possible, but hey, nobody’s perfect on that either. And here’s the deal. This is not just about, oh my God, Mike Pence and Donald Trump may get the Coronavirus. No, no, no, no, no folks, this is about spreading it to other people. Pence and Trump are in the age range of people who this thing is a very severe danger for. But without any underlying health conditions that compromise their immune system, they would both likely be okay if they caught this virus. The same can’t necessarily be said for the hands of every person they’re shaking at a rally, you know, leaving air force one or, or leaving the, the, the chopper, going to Mar-a-Lago, whatever it is.

You can’t guarantee that for all these other people. It’s not about Trump and Pence, folks. It’s about every other person that they’re shaking hands with because suppose they do come in contact with it and then they go and shake another hand and another hand and another hand. We have seen some people walk up to politicians from both sides of the aisle who are essentially in their last stages in life already. You know, they do have compromised immune systems. We have seen people in wheelchairs with oxygen tanks attached to them shake hands with presidents. What happens when you give that person the virus? You personally would be directly responsible for that person’s demise and Trump and Pence don’t seem to understand that or they don’t seem to care about that.

Guys, this is a very serious issue here. I was at my doctor’s office on Monday. Just a routine well visit, got to do it once a year. I encourage everybody to do the same. There were signs up all over this doctor’s office that said, we like you too much to shake your hand and when the doctor came into the room with me, this man I have known for over 25 years of my life, I’ve been going to him that long, wouldn’t shake my hand and he knows me. But that’s how serious this is. We cannot risk contaminating others. We cannot risk contaminating ourselves. But Trump and Pence say, no, we know better than the scientists. We know better than the doctors. We’re going to keep doing it, and if other people get infected, oh well that’s just part of the job, I guess.