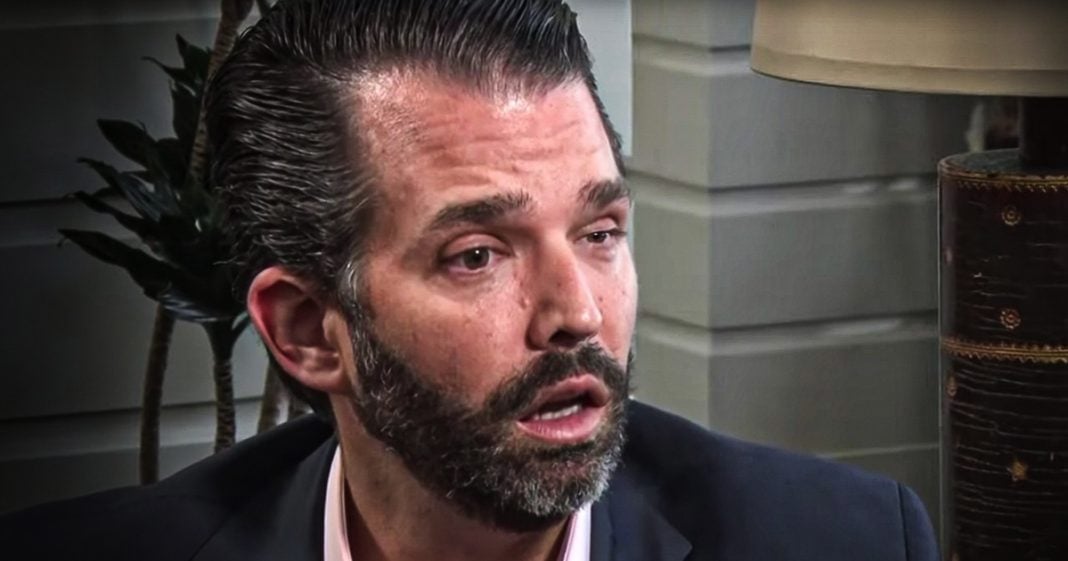 Donald Trump, Jr. has personally diagnosed Joe Biden with Alzheimer’s Disease just days after saying that he wants to publicly debate Hunter Biden about their overseas business ventures. Trump, Jr. is ready to fight anyone and everyone, and he’s going to make sure that the public knows how tough he really is. The only problem is that he doesn’t seem to realize that he lives in a glass house, and we know how that goes. Ring of Fire’s Farron Cousins discusses this.

Yesterday, noted medical professional Donald Trump Jr decided to go ahead and use his medical expertise to diagnose Joe Biden with Alzheimer’s disease. Now, this was in response to that viral video that we had already talked about, about Joe Biden getting in that construction workers face threatened to take him out back. But Donald Trump Jr didn’t see that as just an angry outburst that every human being is, you know, guilty of doing every now and then. He saw it as a symptom and he tweeted out the following, he said, from the Alzheimer association webpage, aggressive or angry behaviors may occur in people with Alzheimer’s or other dementias. A 50 year career politician doesn’t snap back this way to a blue collar guy asking him a reasonable question given his party’s stance on the issue. Now, before we get into the irony of Donald Trump Jr accusing another candidate or another politician, really, of having dementia or other, you know, Alzheimer’s possibly.

Let’s actually talk for a minute because believe it or not, folks, there is unfortunately a little bit of truth to what Don Jr is saying here. How many times over the last just few months have we seen Joe Biden lose his mind when talking to a voter? You know, he yelled at the guy yesterday, cursed at him, shushed his own aide. He has told people, you know, remember the look fat, blah, blah blah, making fun of that guy, challenging him to the pushups or other, you know, physical exercises because the guy was heavyset. You know, getting in voter’s faces and saying, well you ought to vote for the other guy and trust me they are. They’ll remember that in November and then when you whine about losing to Donald Trump, maybe you need to realize, oh yeah, maybe I shouldn’t have told everybody to go vote for the other guy. Now to the hypocrisy point. Joe Biden has shown plenty of instances that something’s not quite right mentally with him. Forgets people’s names. Forgets where he is. Forgot what office he was running for. Confused his wife for his sister.

But Donald Trump Jr seems to forget that he’s living in that glass house of his and his father is just as mentally unstable, if not more so than Joe Biden. Donald Trump senior has suggested nuking hurricanes. He swore that this viral outbreak, the total number of patients would be close to zero. That never happened. He can’t spell to save his life. He can’t string together a cogent sentence. He can’t stay on topic anytime he’s talking. He has come up with some of the most asinine, insane ideas that we have ever seen from a president. So it’s very likely that Trump is also, who by the way, is also prone to these angry outbursts like Joe Biden, suffering from some kind of dementia. And folks, that’s the saddest part of all of this. Our two big party choices in November are very likely to be between the crazy guy and the guy who maybe is not as crazy as the other one. That’s where we’ve landed in American politics, and it’s a really horrible position to be in.