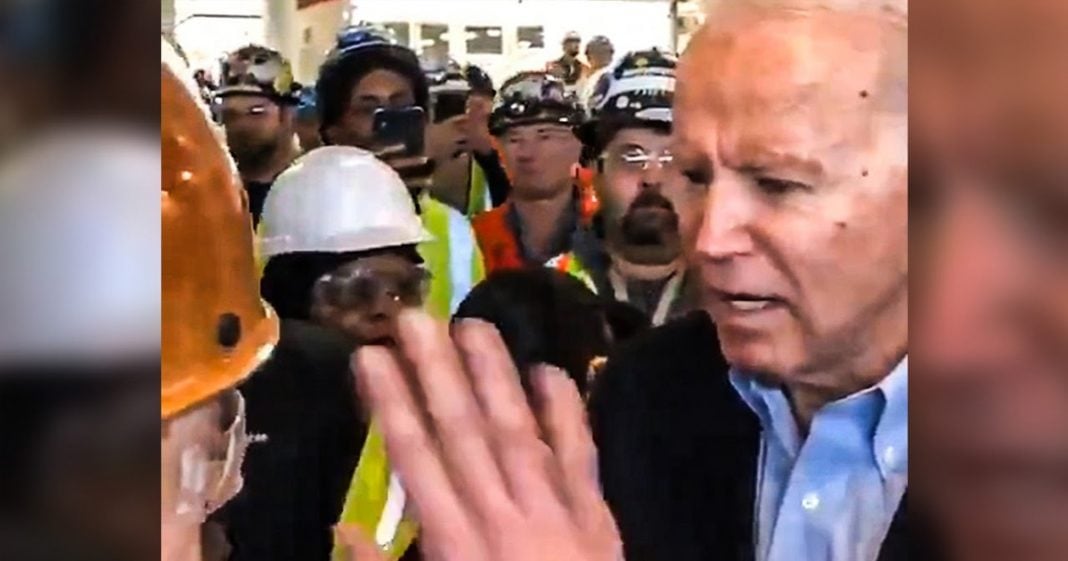 Joe Biden lost his cool on Tuesday, and the whole country got to see a side of Joe that should leave us all feeling uneasy. Biden got into a verbal altercation with a voter in Detroit, and after telling his staffer to “shush,” Biden directed his anger at the voter and threatened to take him “outside” to deal with him. Moderates were cheering this interaction, but no one should like what they saw yesterday. Ring of Fire’s Farron Cousins discusses this.

So yesterday in the primaries, Joe Biden had another very good day, but before the voting concluded on Tuesday, Joe Biden wasn’t having such a good day. By now I’m sure most people have seen the viral exchange that Joe Biden had with a construction worker in Detroit, but it’s worth talking about even more. Here’s the clip in case you hadn’t already seen it.

Let’s start with the obvious facts that yes, what this man was saying to Joe Biden was wrong. That is an obvious right wing talking point. You saw him reading off his phone. I don’t know where he’s reading it from, but yeah, no Democratic candidate with the exception of Beto O’Rourke has said we’re going to ban guns altogether. And I think that’s where this man was coming from because Joe Biden had said he was going to put Beto O’Rourke in charge of gun policy. So I guess you can see the connection there. But Joe Biden himself has not said that, this man said he did. So yes, technically by definition that would be a lie. And then things got really weird, right? Joe Biden telling the guy you’re full of shit. Joe Biden shushing his female staffer there, like she wasn’t allowed to talk or move him along to go where he was supposed to go. The fact that Joe Biden’s sits there and starts listing off all of the guns that he owns.

I mean, all the gun control advocates out there were hammering Bernie Sanders because he’s allegedly so horrid on gun issues and here’s Joe Biden, listen, I own this, I own that. I own all these kinds of guns. I’m, I’m fun with guns. Love me because I love guns too. Yeah, I can’t wait to see how they come out and respond to that even though it’s been 24 hours and they haven’t said a word about it. So yeah, I mean, a little bit of hypocrisy every now and then it’s okay, I guess. But then of course it gets weird, even weirder than the weird stuff we’ve already talked about, which is when he tells the guy like, we may have to go outside. What do you, what are you going to do, Joe? Are you going to fight this construction worker? This very young and rather fit looking construction worker with your 70 plus year old frame? I mean, I don’t doubt that you could probably get a few good licks in, but Joe, this is a young man in his prime and you’re not going to beat him up if that’s what you’re insinuating. It’s simply not going to happen.

I’m glad that he called the guy out for lying and he should have left it at that, but he kept going and he lost his cool, right? I mean, that’s pretty obvious. The man lost his cool. But he didn’t move on and he didn’t apologize and he didn’t understand why what he did was wrong, and I posted this on Twitter yesterday asking people like, what would have happened if, if Donald Trump had done this to a voter? MSNBC would be given this wall to wall coverage for the next six months. This clip would be playing nonstop in progressive media if Donald Trump had done this. Had it been Bernie Sanders doing this, MSNBC also would have been playing this nonstop for the next six months. They would be calling for him to drop out of the race and possibly even resign his Senate seat. But Joe Biden does it and what’s the response? Well, you can go look on Twitter for the responses from the riding with Biden crowd. They love it. They think this is great. This is the best way to do it. This is how you fight back by threatening to take somebody outside. No folks, I’m sorry, but that’s not how this works. You’re the same folks who get up in arms every time. Donald Trump gets a little testy with somebody out there and you applaud it when Biden does it. You cannot have it both ways. I don’t care which side of the aisle you’re on.

Consistency, if there is no consistency in your values, then you do not in fact have values. So either it’s always wrong when the politicians lash out and snap at voters and tell them they’re full of shit and they want to take them outside. Either it’s always wrong or it’s never wrong. Too many times people are willing to overlook the negatives on their own side, but are quick to call them out when they’re on the other side and that has to stop. What Joe Biden did was wrong, and it gets even worse because later in the day after Joe Biden had had a chance to cool down, reporter asked him about his exchange. And what did Joe do? Joe responded by saying, I think it’s horrible that Bernie Sanders has latched onto the Trump narrative on this. Those weren’t his exact words, I’m paraphrasing, but yeah, instead of apologizing saying, you know what, I, I may have lost it a bit. That man was wrong with what he said, but so was I. Instead of doing that, Joe Biden attacked Bernie Sanders as if he had anything to do with any of that. Joe Biden, much like Donald Trump himself, is unfit to be the president of the United States. Unfortunately, the people who voted yesterday and the people who voted before that didn’t seem to understand that.