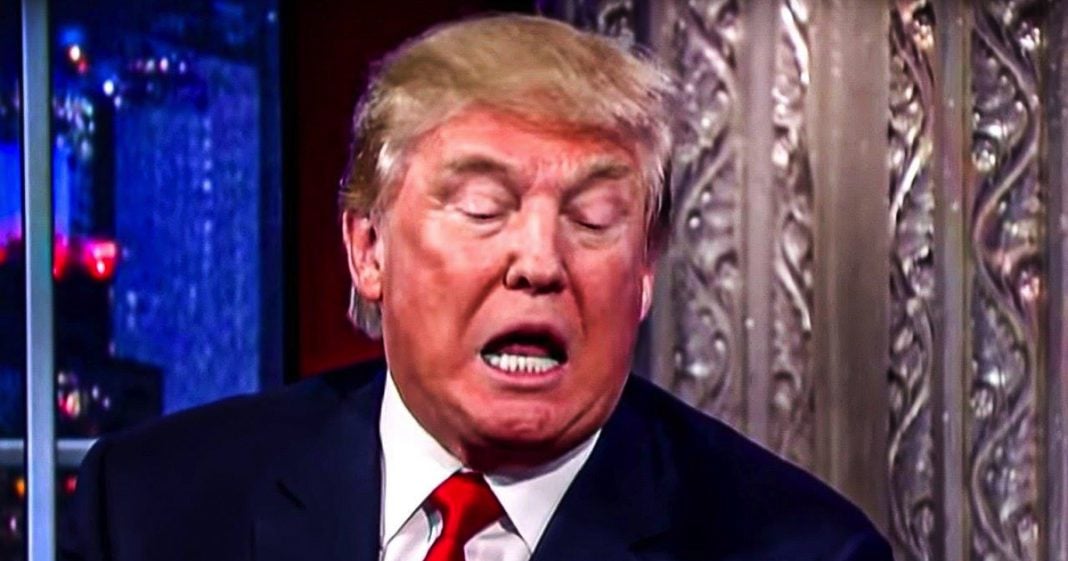 Donald Trump has always been a paranoid germaphobe, but the viral pandemic happening across the globe right now has ramped up those qualities to a delusional point. The President told his aides aboard Air Force One that he believes a member of the press is going to intentionally try to infect him with the virus as revenge. Ring of Fire’s Farron Cousins explains what’s happening.

Donald Trump has always been a very paranoid person. We have seen the paranoid aspect of his personality rear its ugly head all throughout his administration, throughout his actual 2015/2016 campaign, we saw the paranoia creep in at any given opportunity. But we also know based on things Trump himself has said that he is a massive germaphobe and so right now this paranoid germaphobe serving as president of the United States has concocted a new conspiracy theory in his head. And that conspiracy theory that he told his aides aboard air force one yesterday is that some member of the press is going to intentionally infect themselves with COVID-19 so that they can then go and infect the president of the United States. That is what those aboard air force one yesterday told reporters. Donald Trump, the paranoi, paranoid delusional in chief thinks some reporter out there in this country will intentionally catch this virus for the sole purpose of passing it along to him.

Now what’s truly ironic about all of this is that he told this to aides while aboard air force one. You know who else was sitting there with him on air force one? Matt Gaetz. Matt Gaetz who after leaving air force one went into self quarantine because he had been exposed to the virus at CPAC and Trump’s sitting there saying, I think a member of the press is going to give it to me on purpose. Dude, the dude next to you could possibly have it and could have given it to you and maybe Trump is just setting this up in case he does catch it. Maybe he wants us to think that, oh, a member of the press did this because I can promise you there’s going to be plenty of Republicans in this country who think that that’s what’s happened. They’re absolutely going to believe that some reporter got this disease just to give it to the president because a lot of his supporters are just as delusional as he is.

But folks, that’s not going to happen and in case anybody is thinking about it, let me go ahead and issue the warning now. Do not intentionally contract this virus, and if you do have this virus, do not intentionally go out there and infect anybody. I don’t care about your political leanings or the political leanings of the people you’re trying to infect. Please, for the love of God, don’t do that. If you get this, quarantine yourself, do not go near other people. Do not try to weaponize this stupid thing because if you do, you’re going to prove the president right. I mean, let’s forget for a minute that it’s morally wrong and you shouldn’t do it anyway. You’re also going to be given the Republicans more fuel. Don’t do that. Don’t let them win. Okay. Can we, can we be good with that, folks? I feel like that’s a weird request to have to make, but at the same time, I also feel like I kind of have to make it. Do not intentionally infect people.

But as for the president of the United States and his paranoid delusions, I think it’s time we once again start talking about the 25th amendment. We have a very real crisis here in the United States that the president is not taking seriously. The president is clearly suffering from delusions that require the advice and expertise of mental health professionals here in the United States. And there are plenty that are willing and waiting to give that advice to the president, to run those tests on the president. And I think his statements, not just yesterday aboard air force one, but in the past week and a half about this outbreak, I think all of those warrant some kind of psychiatric evaluation to determine if this man is even mentally fit to run this country during this time of crisis.