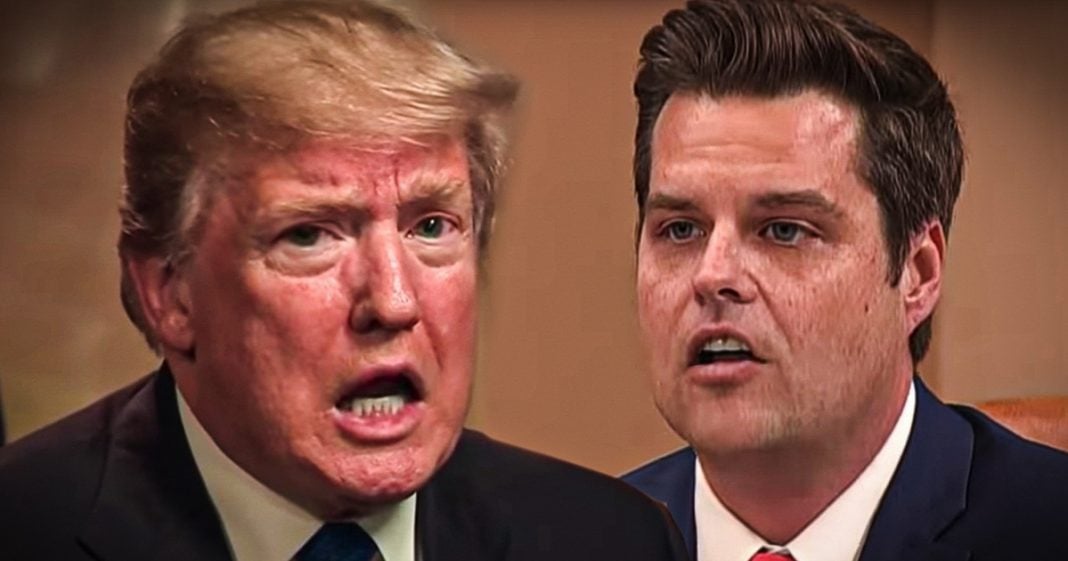 Matt Gaetz decided to quarantine himself on Monday after he learned that he had been in contact with a confirmed coronavirus patient, but not before he flew on Air Force One with Donald Trump. While it is unlikely that either men have the virus, there is still a possibility that Gaetz could have infected the President if he turns out to have the disease himself. Ring of Fire’s Farron Cousins discusses this.

Let’s play a little round of what if, right? What if Republican representative Matt Gaetz gave Donald Trump the Coronavirus? I know it kind of seems like a farfetched thing, but believe it or not folks, it’s not actually that farfetched. Here’s what happened. Matt Gaetz, like many other Republicans was at CPAC where he shook hands, you know, had physical contact with the patient who has since been confirmed to have Coronavirus. So Gaetz, like the other Republicans who touched this gentleman decided yesterday he was going to put himself into that 14 day self quarantine, closing down his Washington DC office, but leaving his Pensacola office open, which to me was weird because we just had a man in Pensacola, one of Gaetz’s constituents that died from Coronavirus. So, so I mean if you ask me, I think that office should probably be closed too, but I’m not in charge of the Gaetz campaign so I don’t know. But before Gaetz went into that self quarantine folks, he was riding aboard air force one with Donald Trump. So it is plausible that if Gaetz himself were infected with Coronavirus, that he may have given it to Donald Trump.

Now, in all fairness, I don’t think that that has happened, right? But I’m not a doctor and I haven’t seen Matt Gaetz’s test results and as of right now, neither has Matt Gaetz because unlike Ted Cruz, Matt Gaetz actually did get tested for the Coronavirus and those tests results are not immediate, and last we heard from his office, they sent it out through Twitter yesterday evening. He was awaiting those test results and we’ll find out more. Been silent for rather long time. But Gaetz assures us that he has not experienced any symptoms and it’s been 12 days at this point, which puts him kind of right at the longer end of the incubation period. But absolutely not out of the safety net area, right? I mean, the incubation period for Coronavirus, according to the experts is typically about 14 days. I know, again, Ted Cruz had said five to six days, I’m fine, no. Five to six days is kind of the earliest that you would see symptoms if it hits you hard. For everybody else, it’s typically about two weeks and that’s what we’re coming up on with Matt Gaetz. It is conceivable that this man has this and we don’t know.

And to be perfectly clear, I’m not saying that I hope he does either because I don’t. But I do have to point out the irony here, right? And we talked a little bit about this yesterday. Matt Gaetz is the one who put on that gas mask to read the paper, the appropriations bill for the Coronavirus response. Then yesterday they tweeted out like he did it to show how serious it is because he just wants everybody to be safe and he was being safe. No, he wasn’t being that safe when he was shaking everybody’s hands at CPAC and then riding aboard air force one with Donald Trump after he knew he had been exposed to that guy. You know, Trump’s a big germaphobe. I’m actually shocked that he hasn’t come out and once again, you know, cut Matt Gaetz off from access to him because don’t forget, that actually did happen a couple months ago. Gaetz voted to limit Donald Trump’s war powers and then they cut him off for a couple of weeks. He wasn’t allowed to go to the White House, didn’t get to ride on air force one, and trust me, if he got Donald Trump sick, that’ll be the last time Matt Gaetz ever in his life gets invited aboard air force one again.