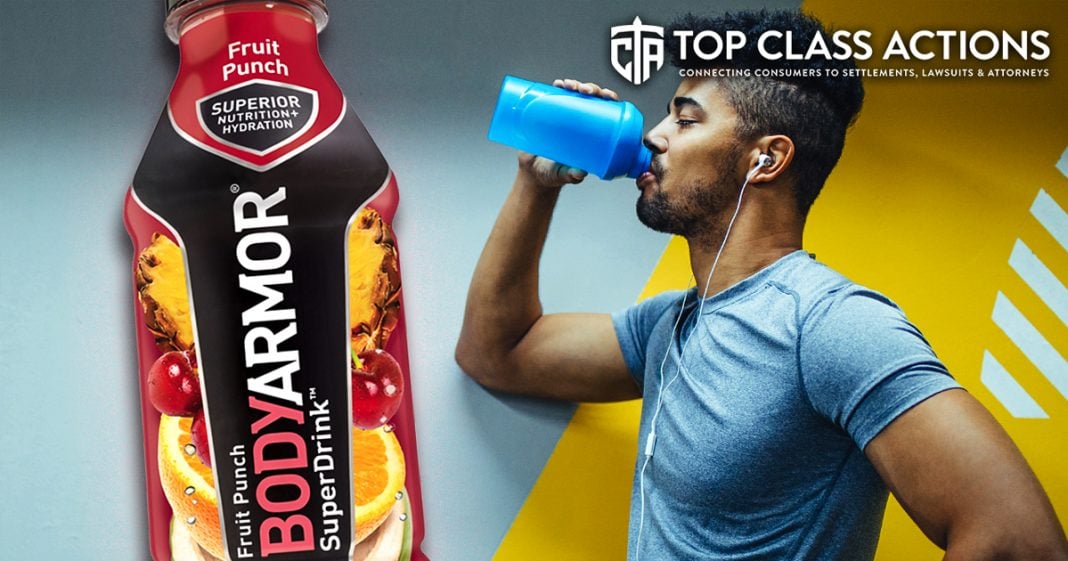 Customers across three states have filed a class action lawsuit saying that BodyArmor SuperDrink is not a health drink as implied by the product’s advertising, but is really more akin to a soda. The customers say the drink is full of sugar and does not provide the advertised hydration benefits. Allegedly, they and many reasonable consumers believed this based on the product’s advertisements that the drink is “More Natural Better” hydration than its competitors. According to the customers, the company claims that the product is good for consumers because it contains essential vitamins and nutrients. Ring of Fire’s Farron Cousins discusses this with Scott Hardy, the President of Top Class Actions.

Farron Cousins:                  The first sports drinks in this country, specifically Gatorade, was actually developed by scientists to help rehydrate athletes when they were out there doing their thing on the field and it worked. It did a phenomenal job of replenishing the body’s electrolytes, gave them hydration and ever since then, which I believe that might’ve been back in the sixties energy drinks have become common, not just for athletes but for everyday people wanting to get that little jolt of electrolytes or stay hydrated in a world of coffee and caffeine. And just as these drinks have expanded into our daily lives, so to have the number of people making these drinks, and of course they’re not quite using the same science that those scientists did back when they developed things like Gatorade.

Joining me now to talk about what’s actually happening is Scott Hardy with Top Class Actions, and Scott, I don’t even think Gatorade today, just for clarification, it’s not even what it used to be. But we’ve got a class action lawsuit now about a particular energy drink that the plaintiff’s say is essentially a soda because it’s nothing but sugar. Tell us about this one.

Scott Hardy:                          That’s right. I mean, Gatorade has tried to stay in front of it. They’ve rolled out G2 which has a much reduced caloric intake, much reduced sugars. They’ve got Propel, which also reduces the calories. And so then you have BodyArmor SuperDrink and the BodyArmor drinks have come out really in a grand fashion in the last couple of years, doing a lot of advertising, pushing these things out here, trying to make you think that these are healthy drinks to give your kids. They’re healthy drinks, they’re using athletes to go out there and, you know, you do your workout, take your BodyArmor SuperDrink. But unfortunately it appears that according to this class action, these really should be judged as soft drinks, just like soda because there is so much sugar in it.

Farron Cousins:                  Well, and the problem with these is obviously people think if you’re drinking an energy drink, you’re getting something that’s better for your body. And they do have a tendency to say, well, let me have two or three of these. I just did a big workout. Or, you know, my, my kids had the, had a cold, they need more hydration. Let me give them a couple of these. That is also very common. And then what you’re doing is you’re overloading your body or, or their little bodies with sugar and that can obviously be very dangerous and that’s part of the, one of the claims in this lawsuit is not just, hey, you’re giving us too much sugar. It’s that, hey, you’re giving us an amount of sugar that if we have a couple of these per day, this could be very dangerous for us and you’re not letting us know that this is what you’re doing.

And we honestly, we see that with a lot of energy drinks now. The sugar content in these energy drinks has increased dramatically over the years, and it’s part of the claim, well it’s full of electrolytes. Carbohydrates are an electrolyte and an easy source and cheap source by the way of carbohydrates is pure sugar. So, you know, they’re, they’re sticking true to their claims of electrolytes, but we’re getting it from worse sources and I think that’s part of the problem that we’re seeing here with this.

Scott Hardy:                          Exactly, you know, we’re, we’re trying to keep our kids healthy. We’re trying to be healthier overall and so we don’t want to ingest all that sugar, even if they’re trying to give it to us through cane sugar or other ways, but we know that the sugar content can be harmful. And, you know, this class action simply states that, you know, the consumers wouldn’t have purchased this drink if they knew that it could be harmful, if it actually wasn’t so good for their body. And it’s trying to make change those claims around to make BodyArmor pull all of these claims that it’s healthy and good for nutrition in order to attract all of those extra buyers.

Farron Cousins:                  Yeah, they, they took away our freedom of choice here. You know, if they had been honest with us and if people wanted, wanted the sugar, they could have said, well, I don’t care. I like the flavor. I’m going to keep doing this. But everybody else who said, well, actually I was drinking this for the hydration and the health benefits, so let me make a healthier choice when I’m going to pick up one of these drinks. For more information about this issue, follow the link in the description of this video and head on over to Top Class Actions and if you haven’t already done so, I encourage everyone to subscribe to their weekly newsletter. Scott Hardy with Top Class Actions, always a pleasure talking to you. Thank you.