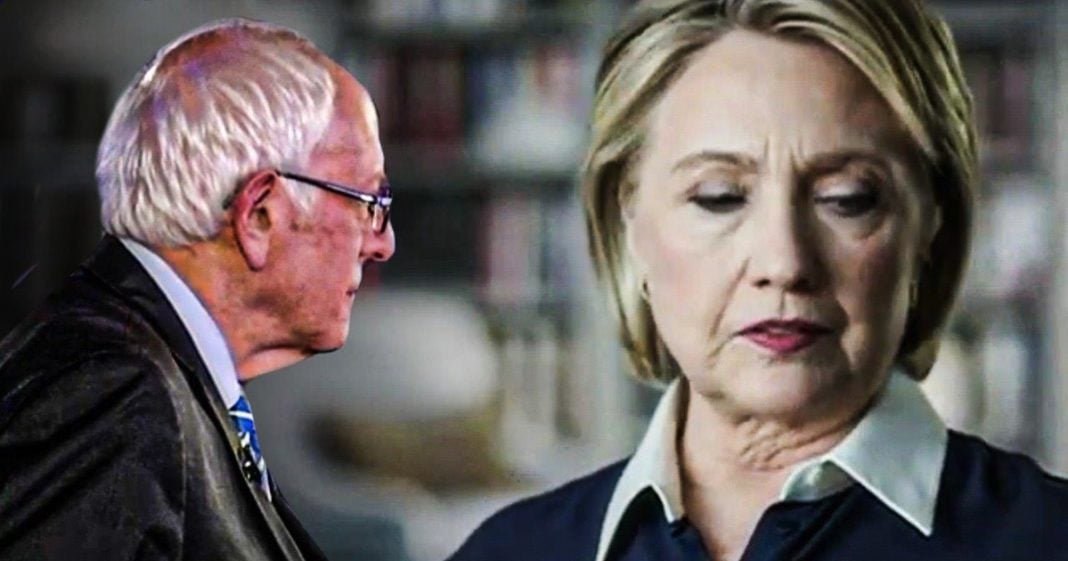 Bernie Sanders finally responded to Hillary Clinton’s constant criticism by saying that, unlike her, he doesn’t want to keep reliving 2016. This happened during a Fox News townhall, and Fox played a clip of Clinton’s new Hulu series where she relentlessly attacked Bernie with completely false allegations. Ring of Fire’s Farron Cousins discusses this.

Last night during a Fox news town hall, Bernie Sanders was asked directly to respond to Hillary Clinton’s nonstop criticism of him that is on full display now in that Hulu documentary series that’s been released about Hillary and Bernie Sanders didn’t miss a beat. It felt like he had been waiting to be asked this question for a very long time. Here’s a clip of what happened.

Martha MacCallum:        And here is one of them. This is Hillary Clinton. She talked about you in a documentary that was released earlier this week. Watch this.

Hillary Clinton:                   Bernie just drove me crazy. He was in Congress for years, years. He had one Senator support him. Nobody likes him. Nobody wants to work with him. He got nothing done. He was a career politician. He had, he did not work till he was like 41, and then he got elected to something. It was all just bologna and I feel so bad that, you know, people got sucked into it.

That was about as perfect of a response as you could want from Bernie Sanders. Right? He didn’t get overly personal. He didn’t attack her. He just said, unlike her, I don’t want to keep reliving 2016. I don’t want that to be the only thing I think about for the rest of my life is what he’s saying to us. But unfortunately for Hillary Clinton and some of those folks on, on Twitter who still have that hashtag still with her in their bio’s, 2016 is the only thing they’re going to think about for the rest of their lives. It represented a massive failure, but unfortunately none of them see it that way. They see it as the election being stolen away from Hillary Clinton, stolen away by Russia, stolen away by Susan Sarandon, by Bernie Sanders, by the Bernie bros, by Jill Stein, by anybody else they can blame it on. Everybody, of course, excluding Hillary Clinton.

They don’t like to talk about the fact that she didn’t go out there and campaign in swing States. They don’t want to talk about the fact that Bernie Sanders did nearly 30 different events for her in the final month of that campaign. He was flying all over the country meeting with the people that Hillary Clinton refused to meet with so that she could meet behind closed doors with her big money donors. Bernie was the one doing the leg work on that campaign and they still have the audacity to blame him for what happened to her. No, I am glad Bernie Sanders responded in the way he did. He worked his butt off for Hillary Clinton and she is completely ungrateful and bitter about the whole thing, but she’s bitter at the wrong people. If she wants to know who to blame for 2016 she needs to go to the nearest mirror and have a good long look at it because it was her.

She is the one who did that. She is the one who lost that race. Yeah, she won the popular vote, fantastic. That doesn’t mean a whole heck of a lot here in the United States because the way our system is set up. She lost and as much as she wants to blame Bernie Sanders, it’s not going to stick. I mean, you saw that clip, you saw the, how the crowd reacted when he said that, they cheered for him. They applauded him. They were happy about it. Most people in this country are sick and tired of Hillary Clinton. They’re sick and tired of the whole Clinton family. We’re tired of the political legacies. We want to move on and we are moving on, but she continuously pops up and tries to pull us back to 2016. We learned our lessons from it, she didn’t, and that’s why she’s so angry about it. She wants us all to be dragged back to that year, reliving that miserable experience over and over again, because that’s what she’s going to be doing for the rest of her life, and she wants the rest of us to be as miserable as she is.