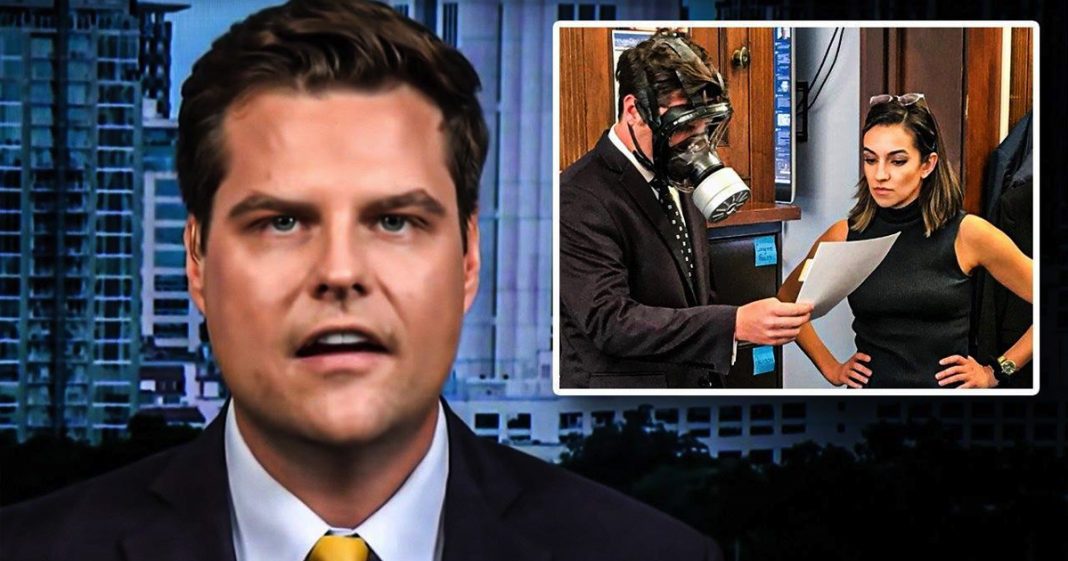 Republican Congressman Matt Gaetz loves making a spectacle of himself, and he did it this past week by wearing a gas mask while reading a bill detailing the response actions regarding the viral outbreak. Two days after these photos made the rounds on the internet, one of Gaetz’s constituents in Northwest Florida died from the virus. Ring of Fire’s Farron Cousins explains why Northwest Florida deserves better.

Last week, Republican representative Matt Gaetz thought it would be pretty darn funny to send out a picture of himself reading the Coronavirus appropriations bill, which is about $8 billion, while wearing a gas mask. Because you know all the hysteria around the virus and people are freaking out and, you know, dying from it and Gaetz thought, hey, this is a good time to make a joke about it. So he puts on the gas mask, takes his funny little picture there, tweets it out for the public to see and then two days later, one of Gaetz’s own constituents died from COVID-19. In fact, that hospital’s right down the street from me right here where this man died. Had been there for about a day or two after being diagnosed with this thing. He was an older man, he had several underlying health conditions, but the virus killed him right here, Pensacola, Florida in Matt Gaetz’s district, two days after Gaetz had mocked the pandemic itself with that little gas mask photo.

So Gaetz has to send out a response saying his heart goes out to the family, you know, very tragic what has happened and all that, you know, usual stuff. But that doesn’t change the fact that Gaetz mocked this. Folks, this is not something to be mocked. This is no longer something to be downplayed either and what’s really interesting is that the worst this thing has become in the beginning, as I’ve said repeatedly, I was skeptical. I’ve seen the media hype a lot of things that turned out to be a whole lot of nothing. This isn’t a whole lot of nothing. I was wrong about that, and I do apologize for it. But now that it’s actually getting serious and we’re starting to see how much it’s spreading, more and more Republicans are coming out to now say that it’s just a media creation, that the hype is not reflected in reality even though about 22 Americans have died from this thing now. And sure, 22, not a huge number, right? But we’re in the early days of this thing, folks.

I mean, my secluded little town down here in Florida had somebody die from this over the weekend. Broward County, Florida also had somebody die from it over this weekend, Florida alone has two people. We’ve got a dozen in Washington. Folks dying in California from this. This is not limited to just red States or blue States, to the rich or the poor, people all over the place are dying and more and more people are getting it and the United States is not responding to this thing properly and that’s probably why Republicans like Matt Gaetz do want to try to downplay this and act like it’s not a big deal because they know that their guy, the one sitting in the White House today is the one that is screwing up the response to this. And they don’t want people to think that he’s screwing up as bad as he is. So they throw on their little gas mask, they take these fun little pictures, you know, they don’t really care about the people dying in their districts. All they want to do is make people think that all of this is overblown and Trump is still doing a great job. Even though we see the reality around us, people are dying, Republicans are mocking it, and Trump is doing almost nothing to help us out.