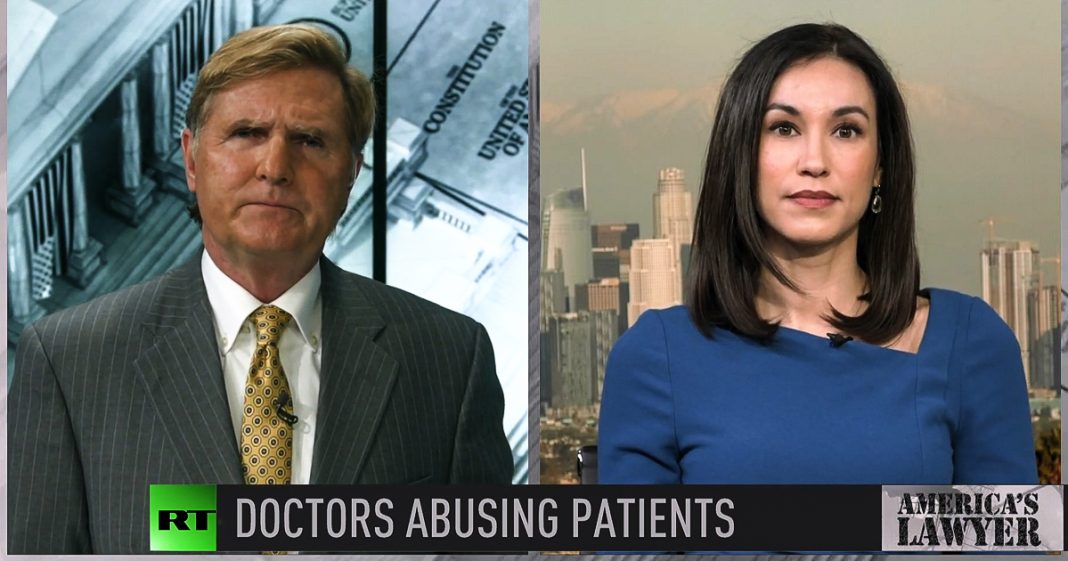 Via America’s Lawyer: RT correspondent Brigida Santos joins Mike Papantonio to shed light on over 100,000 documents alleging sexual misconduct by physicians, psychiatrists, and OBGYN’s nationwide, oftentimes against unconscious patients. How have our own doctors been able to escape scrutiny, especially amid the MeToo movement that’s rocked the entertainment and collegiate sports industries?

Mike Papantonio:             A new investigation reveals that physician sexual abuse is tolerated in every state. Medical boards have swept the problem under the rug for decades. In many cases, alleged doctor offenders are allowed back to work without any repercussions. RTs Brigida Santos joins me now with that story. Brigida what can you tell us about this investigation? It was done by the Atlanta, the Atlantic Journal. This is a, this is an ugly story, man. How about laying it out for us?

Brigida Santos:                   Yeah, the Atlanta Journal-Constitution combed through over 100,000 public disciplinary records across the nation to basically study cases that may have involved sexual misconduct and while they discovered reports of physician’s sexual abuse in every single state, including “rape by OBGYN’s, seductions by psychiatrists, fondling by anesthesiologists and ophthalmologists, and molestations by pediatricians and radiologists.” The victims were people across all age demographics, including babies, youths, adults and seniors. Documents show that the victims were sometimes sedated at the time of the assault while others were tricked into thinking that doctors was simply performing legitimate medical procedures while taking inappropriate photos and improperly touching them. Many victims said they often felt too intimidated and embarrassed to say anything at all.

Mike Papantonio:             Well, you know, it’s very typical. There are States that are worse than others, which States have the worst problems where it comes to this particular, these types of incidents? I mean, always you see a difference in, in the way that splits up.

Brigida Santos:                   Well, the States that had it worse were Georgia and Kansas where at least two thirds of doctors who were publicly disciplined for sexual misconduct have been allowed to practice again and in Oregon an anesthesiologist was accused of sexually assaulting 12 women. In Texas, another doctor still practices today even after being accused of misconduct by 17 women. This list goes on across the country, at least half of the doctors, publicly disciplined, still have active medical licenses today and those are just the public cases that we know about. There are many more that go unreported, so we don’t even know about those and there’s little to no accountability because even when a physician is fired or disciplined, they’re free to essentially move to another state and pick up where they left off. And sometimes when they are disciplined, it’s something very minimal. Like they’re told that they need to have a chaperone in rooms with them or that they need to take some sort of training to teach them boundaries. So this is an absolutely disgusting story and it’s just like every other industry that we’ve seen stories like this in for example, Hollywood, you name it.

Mike Papantonio:             Yeah, what’s so amazing to me about this story is that the medical boards are saying, well, we have to do this because there aren’t enough doctors. That is literally is what they’re saying.

Mike Papantonio:             Yes, we do that. We let these doctors get away with nothing, including rape. We let them get away with these things, but we do that because there aren’t enough doctors. Now isn’t the logical answer to it, if that really is the case, open more medical schools? Let more people graduate as doctors instead of making it virtually impossible to get in. It’s virtually an antitrust kind of issue. You know these, there actually have been cases that have been brought in terms of antitrust in the medical profession, trying to keep down the numbers of doctors throughout the country. So for them to say, well, gee whiz, we have to do this because, ah yeah, I know Dr Harry raped some, raped another person, but we got to keep him in the business because there aren’t enough of us. Thanks for joining me. Okay.