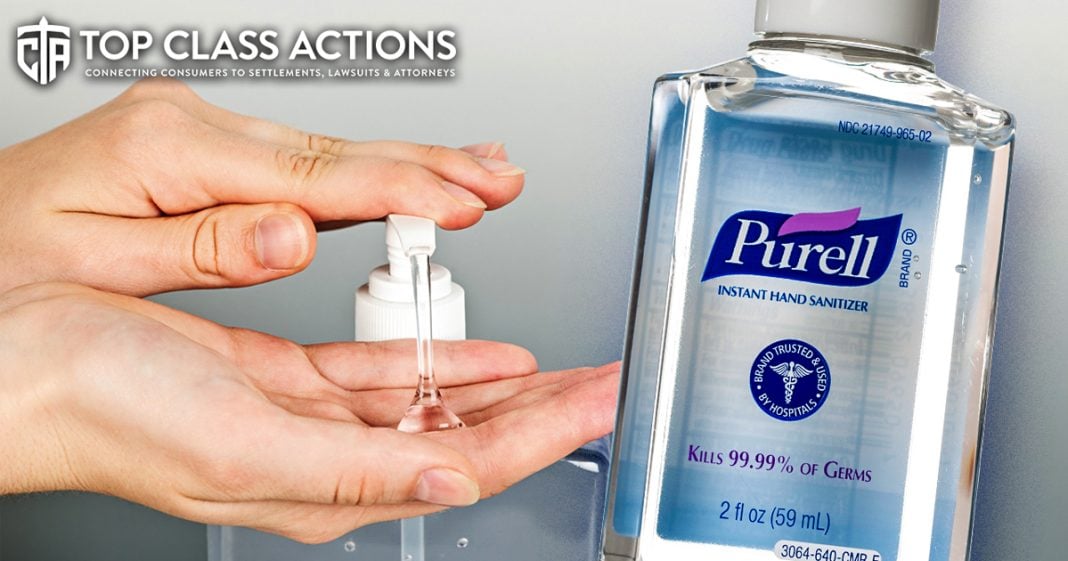 A California woman says that she and other consumers were misled about the effectiveness of an alcohol-based hand sanitizer in a recently lodged Germ-X class action lawsuit. In another case, the manufacturer of Purell faces class action allegations that their Healthcare Advanced Hand Sanitizer is falsely marketed as being able to prevent serious diseases such as the flu and the Ebola virus. Ring of Fire’s Farron Cousins discusses this with Scott Hardy, the President of Top Class Actions.

Farron Cousins:                  Well, we are currently in the middle of flu season and on top of that we have the Coronavirus sparking fears in Americans from coast to coast. And as such, people want to reach for that hand sanitizer because they think based on the marketing it’s going to help protect them from certain diseases. Maybe not Coronavirus, but certainly cold and flu, I mean, they tell us that in these advertisements. But unfortunately, according to several new class action lawsuits against some of the biggest hand sanitizer brands out there, these claims are not backed up in any way by the science and I have Scott Hardy from Top Class Actions with me now to tell us what’s happening and Scott, we were in hand sanitizer season right now.

Especially, you know, with a potential pandemic coming our way in the form of the Coronavirus. So hand sanitizer is a hot commodity. People are going for this all the time and we have seen, they have said it’s going to protect us from the cold, the flu, and even Ebola. They have told us that this hand sanitizer could protect us from Ebola and that’s actually one of the reasons that these lawsuits had been filed. Take it from the top. We’ve got both Purell and Germ-X. Let’s start with Purell here.

Scott Hardy:                          Exactly, yeah, it’s pretty crazy when now people are throwing out, oh now the Coronavirus will be killed by this. You know, I found out something interesting when we were looking, talking on topic of hand sanitizers is that MRSA can’t be killed by hand sanitizer. MRSA is just washed off when you wash your hands with soap and water, so it’s something to keep in mind when we’re talking about all of these issues with hand sanitizers and do they help kill some germs? Yes, but are they killing Ebola and Coronavirus? It doesn’t appear very likely. This first class action involves Purell and it’s being falsely, according to the class action, being falsely marketed as being able to prevent serious diseases such as the flu and Ebola.

The class action was sparked by an FDA warning letter, which ordered the manufacturer to stop advertising that Purell hand sanitizer with their dangerous marketing. Based on the advertising claims, the FDA noted that Purell is considered an unapproved new drug under the food, drug and cosmetic act because they’re advertising and saying, you know, it will beat the cold, it will beat the flu, it’ll beat Ebola. And the FDA is saying, hey, you can’t claim that your hand sanitizer or anything is going to be killing all of these dangerous diseases unless you have science to back it up.

The plaintiff’s further claim that consumers may assume that Purell hand sanitizer is effective against diseases less serious than Ebola and the complaint argues that when consumers believe defendant’s claims, they are less likely to engage in other precautionary and preventative behavior, which actually will prevent transmission of these diseases. And that’s why the FDA came down so strong on it is people are thinking or saying, hey, is that Ebola? Touch, touch, touch, touch, touch. Oh, don’t worry. I’ve got my Purell right here. We’re just fine. Nope, doesn’t appear that’s the case.

Farron Cousins:                  Yeah, you know, I have to say that’s absolutely one of the most absurd claims and you by, you and I been doing this for over a year now. I don’t know that I’ve ever seen anything so blatantly absurd because Purell in their marketing, they said, well, you know, Ebola is what they call it enveloped virus and the alcohol in our hand sanitizers has been shown effective to either kill or inactivate enveloped viruses. It doesn’t specifically say Ebola, but it says Ebola is this and we, we defeat this and therefore any reasonable consumer would assume, oh sweet, I can avoid Ebola with this $2 bottle of hand sanitizer I got in the checkout at the grocery store.

That, that’s, that’s crazy and I’m glad these consumers are calling this out because it’s also dangerous. People need to understand that these hand sanitizers can absolutely be effective against some things. But are they some kind of miracle cure all that’s going to protect you from ever getting sick? Absolutely not and that kind of leads us in to this other one. The Germ-X, you know, they, they’ve made maybe not quite as outrageous claims, but still some claims that they cannot back up, haven’t they?

Scott Hardy:                          Exactly. The Germ-X class action alleges that Germ-X and hand san, hand sanitizer dupes consumers into thinking that the product would fight the flu virus. However, there are allegedly no clinical studies that show alcohol based hand sanitizers reduce instances of the flu. And, you know, one of our amazing folks here on my team, Nicole said, you know, hand sanitizer is actually required on the school list for the classrooms. So when you’re sending your kids to class, hand sanitizer is one of those things that they’re putting on there because they want to keep these kids safe and healthy and, you know, they’re, as we both know as parents, our kids are just in these giant germ factories called schools and we hope hand sanitizers would help. But, unfortunately, you know, we just aren’t seeing that. And does it help kill the common cold? Hopefully. The flu? Doesn’t appear that’s the case. Definitely not Ebola and I, I definitely wouldn’t count on that being the killing the Coronavirus either.

Farron Cousins:                  You know, it is remarkable too. You know, there’s no studies, this Germ-X suit says, that have shown that alcohol-based sanitizers can reduce the instances of the flu. And in the Purell one the FDA said, listen, you’re making claims that you cannot back up whatsoever. So it is, it is important for people to understand that, yeah, if you’re a hand sanitizer junkie, you know, kinda like me. I do use it several times a day, touch lots of things in the building. There’s lots of people coming and going and there’s always somebody who is sick. You want to do it to feel safe. I also wash my hands constantly too in addition to the hand sanitizer. So we’re not saying don’t use it, it’s just do not expect it to basically solve all your problems in terms of germs and obviously with these lawsuits, if they’re making claims that they cannot back up with the science, then they need to be held accountable for that.

Farron Cousins:                  For more information about these issues, follow the links in the description of this video. Head on over to Top Class Actions and make sure you sign up for their weekly newsletter to stay on top of issues like this. Scott Hardy with Top Class Actions, thank you very much for talking with us.