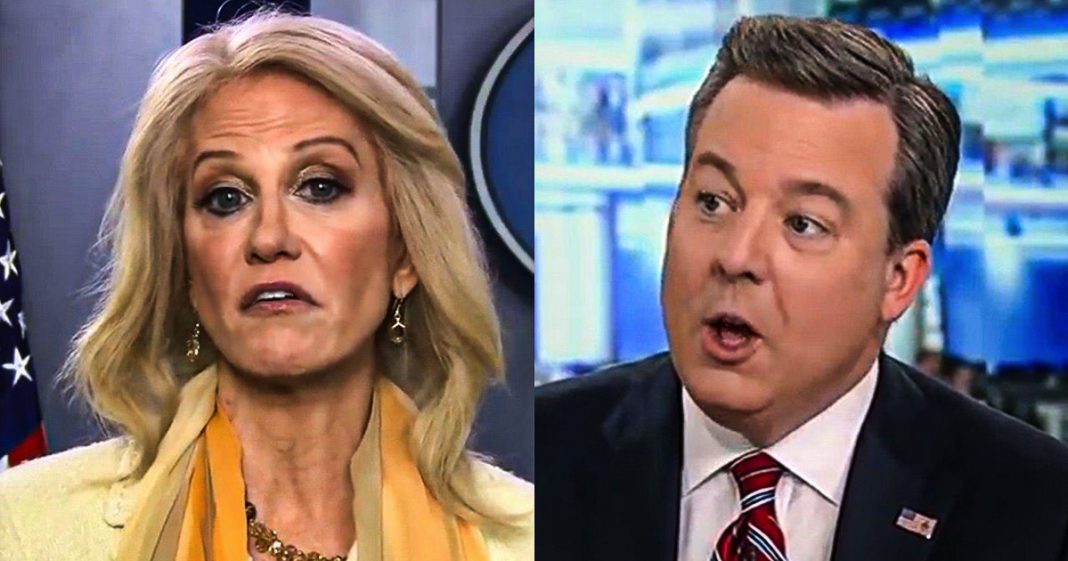 Fox News hosts called out Kellyanne Conway on Friday for lying about what Donald Trump had said about cutting entitlement programs like Social Security and Medicare. Conway insisted that Trump never said this, and then the hosts played a clip of Trump saying exactly what they said he did. Conway tried to claim that she was still right, but the clip spoke for itself. Ring of Fire’s Farron Cousins discusses this.

So last week we reported on the fact that Donald Trump admitted during a Fox news town hall on Thursday evening that cuts would be coming to entitlement programs like Social Security and Medicare. Well, on Friday, Fox news host Ed Henry brought on White House counselor Kellyanne Conway to ask her point blank if there were going to be cuts as the president said there would be and Kellyanne Conway absolutely lied her face off about what the president said and Fox news, believe it or not, folks, they actually called her on it. Here it is.

Kellyanne Conway:        He didn’t say that. He didn’t say that, you’re misquoting him respectfully. He, and when I talked to him after, as I said, there are some articles and some Twitter traffic that says the following, and he said, no, I’m talking about cutting deficits and he…

Martha MacCallum:        But if you don’t cut something in entitlements, you’ll never really deal with the deficit.

Kellyanne Conway:        But that wasn’t what he’s talking about. He’s not talking about cutting entitlements and he has said that several times. Now his press secretary put out a statement last night that that is not what he was referring to and the president himself as weighed in on this as well.

You know what’s fun about that clip is that she starts off saying, no, no, no, no. He didn’t say that. You’re misquoting him altogether. And then Ed Henry’s like, okay, all right, well here’s the clip you can see for yourself. He said, the thing that I said he said, and then after she watched it, Kellyanne says, well, he was talking about something else. You know, he was talking about cutting the deficit. Except Kellyanne, we all have ears and we all heard what he said. He was asked specifically about cutting entitlements and he said, oh we’ll be cutting. Four simple words, oh we’ll be cutting, when asked about entitlements. Now unfortunately after Kellyanne backtracked and said, oh no, he will, he said but he was talking about something, that Fox news did not call her on, that they allowed her to keep talking upon which she then started attacking Obama.

She started attacking the Democrats and, you know, just kind of did her best to redirect the conversation into something she could more easily lie about and get away with. Because on Fox news, you can lie about Democrats all day long and they’re not going to say a word, but occasionally you tell a lie so egregious about the president of the United States, they have to call you on it, especially when it relates to something that was said on their own network and that’s where Kellyanne faltered, folks. You can lie all you want on Fox news, but you can’t lie about something that happened on Fox news. They will have to correct that. So Kellyanne, learn your lesson from that. If you want to lie, make sure you’re lying about something that didn’t happen on the network where they already have the footage queued up and ready to play.

But you forgot that very simple rule of going on Fox news. Bottom line is, folks, yes, Donald Trump wants to cut Social Security. He wants to cut Medicare, and we know that not because he just said it on Fox news last Thursday, but because it’s literally in his budget proposal, it has been in every budget he has put forward. It’s not that, oh, is he going to do it? No folks, he has, he has been doing this for years. The budget he put out in February calls for more cuts to these programs. This is no, no longer speculation. This is not taking a clip out of context or misquoting the president. It’s looking at what he has actually done and as much as she would like to spin it, Kellyanne Conway can’t lie herself out of that situation because all of us have access to that budget proposal where he specifically once again, calls for cutting Social Security, Medicare, and pretty much every other entitlement program from the federal government.