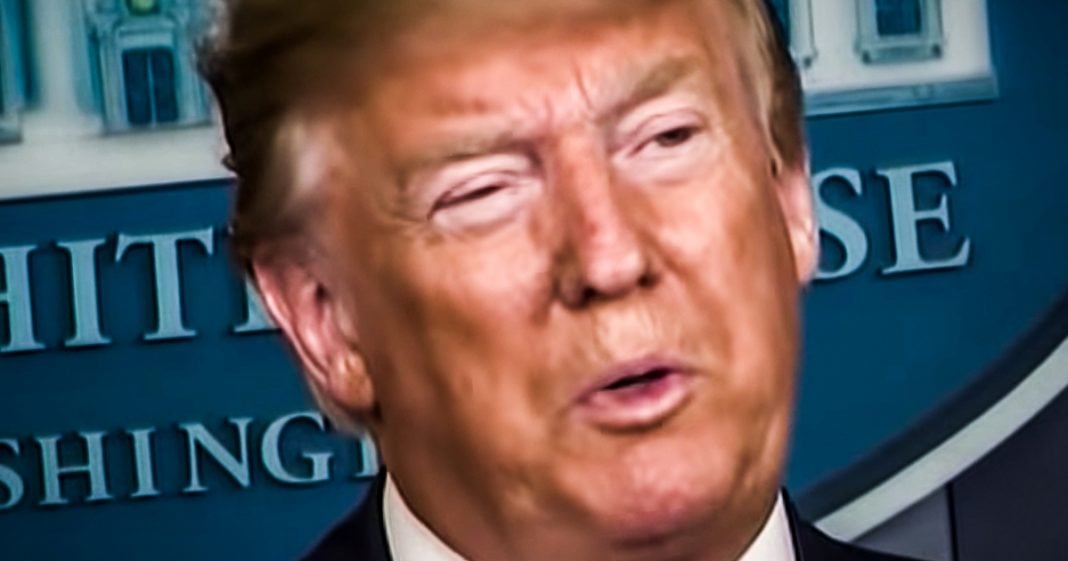 Donald Trump made a big showing earlier this week when he donated his quarterly salary of $100,000 to the Department of Health and Human Services. Not only is that a drop in the bucket for both Trump and HHS, but it doesn’t even come close to the amount of money that Trump has made while he’s been president. He is pulling in millions from his businesses because Republican groups keep renting spaces to make him happy. Ring of Fire’s Farron Cousins discusses this.

On Tuesday of this week, Stephanie Grisham, the White House press secretary tweeted out a photo, a photo of a check, a check signed by Donald Trump, a check in the amount of $100,000 to the department of health and human services from Donald Trump’s personal bank account. Wow, what an awesome guy, right? And of course Eric Trump retweeted this and talked about how great his dad was and how giving he is because this was Donald Trump’s first payment of his quarterly $400,000 a year salary, $100,000 he’s giving to the department of health and human services after just a week ago announcing he was slashing their budget. Hundred thousand dollars. Trump’s such a great guy. Here you go department of health and human services. I know you’ve got a lot of work to do. Stephanie Grisham hyping it, the Trump kids hyping it, Republicans thinking, oh my God, thank you Trump. You’re such a generous person. Wow. We need more like you.

Y’all are all idiots, all of you, every one of you. I mean, seriously, folks. First of all, Donald Trump cut the budget for the department of health and human services by millions of dollars. Giving them $100,000 is not going to allow them to do something they weren’t able to do in the first place. It means virtually nothing at this point. He should have given that money to an actual charity out there. Of course, we know the Trumps aren’t very good with charities and that’s why they’re banned from being on the board of one in the state of New York. But $100,000 to a charity means a lot, to a government agency that’s had its budget slashed by millions of dollars by you personally, probably not going to do anything. Not to mention the fact that Donald Trump deserves approximately zero seconds of praise for donating $100,000 of his salary. Wow. The moron is making hundreds of millions of dollars a year from his businesses folks, even while being president and some of that because of the fact that he is president. We have Republican groups, including the national Republican party themselves, other conservative organizations that are renting rooms and business spaces left and right at Donald Trump’s properties, putting millions of dollars a year in the president’s pocket. And we’re supposed to praise him for every three months donating $100,000 to government agencies that he’s already cut back?

No, the man made close to half a billion dollars last year off of his properties here in the United States alone because after all, he didn’t divest. He is still the owner of those. He gets those profits. He’s even still allowed to touch the profits if he gets the okay from his financial, I guess guardian, which is his son, Donald Trump Jr. He is not giving away a fortune. He is not helping anybody by donating this measly presidential salary and no, it wouldn’t be measly for me or you, but it’s measly to a guy making half a billion dollars a year in revenues from his businesses. Donald Trump has also submitted a reimbursements from the secret service to the tune of half a million dollars, which means they have to reimburse him after they’ve already spent millions at his golf resorts and the amount they had to reimburse him for $500,000 is actually far more than his yearly salary of $400,000 folks. You’re being hoodwinked by a con artist who says, look how much money I’m giving away on this side while pulling millions in and stuffing in it his back pocket on that side. But y’all are all too busy watching him drop a penny in the bucket to see that he’s pulling dollars out of the cash register.