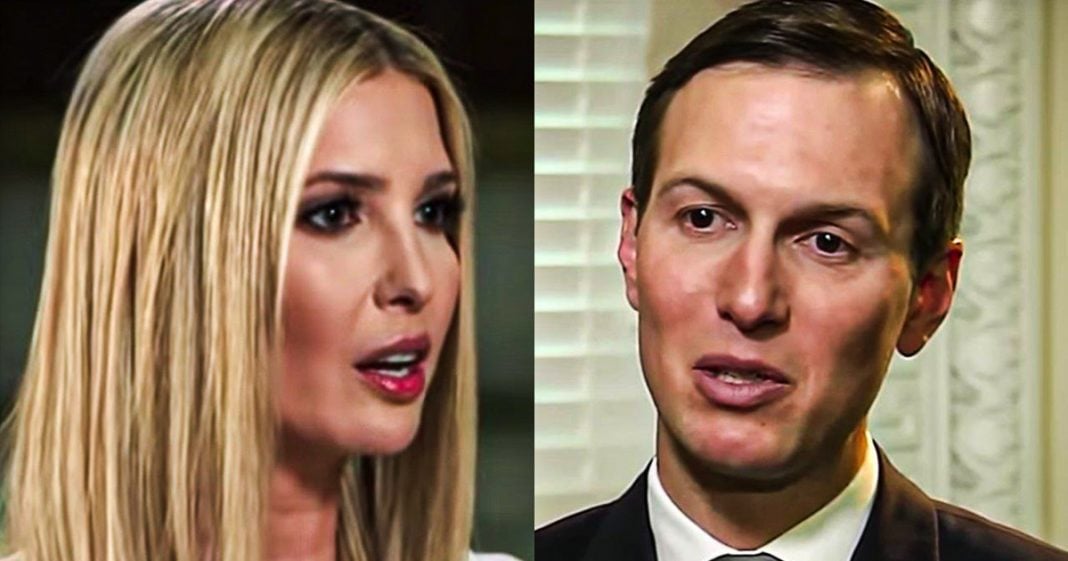 A new analysis has revealed that Jared Kushner, husband of Ivanka Trump, has pulled in anywhere between $25 and $50 million from the tax cut package that he helped push. This was the result of some of the real estate loopholes that were written into the law, and many believe that these loopholes and tax breaks were put there to directly benefit the Trump family. It’s hard to argue at this point that they weren’t. Ring of Fire’s Farron Cousins discusses this.

According to new filings from the government ethics office, Jared Kushner raked in somewhere between $25 and $50 million because of just one of the tax cuts that he and his wife Ivanka personally pushed to be included in the 2017 Republican tax cut package and that tax cut applies to opportunity zones. So basically this is a tax cut that really only applied to real estate developers like the Kushner family and like the Trump family. If you’re not in real estate, then, then you don’t get this opportunity zone tax break and Jared Kushner was one of the architects of it along with Ivanka and now they just made tens of millions of dollars off of it. Here’s how their little scam works. An opportunity zone is an area that has been declared by a state, local or federal government, as an area of underutilization. Meaning we want businesses to come in here and start, you know, making businesses, opening up shops, doing things like that. Maybe building apartment buildings because this is an area that is underutilized and we feel that if investment came in here it would revitalize the community and the 2017 tax cut package said, okay, we’re going to give you huge tax breaks if you come in and do this.

Well Kushner owned part of a company called Cadre and what Cadre did was they went around and invested and bought up real estate in these opportunities zones and then sold it or leased it to other people. Right. Swoop in, buy low, sell high. Kushner was right there and he knew it. He knew he owned part of Cadre and that’s why he pushed for this tax cut because he understood it would directly benefit his business. Now he and his wife Ivanka get to pocket a couple, you know, maybe up to $50 million from it. That has been the goal of this administration and every single member of this administration since day one. What can I get out of this for me? What policy can I push that’s going to benefit me directly and Jared and Ivanka found theirs and here it is. These opportunity zone tax breaks and folks they are cashing in. This is despicable, although completely predictable, still despicable.

These two individuals need to be kicked out of this administration. They need to be investigated and we need to find out exactly what was happening in their communications that caused them to push for this very obscure tax break. Because if there’s any documents, if there’s any emails, if there is any text messages, if there’s any WhatsApp messages because Kushner loves to use, that indicating that Kushner did this only because he knew he stood to make a huge profit from it. Then that’s criminal and this kid needs to be investigated. Unfortunately that is obviously not going to happen while Donald Trump is still the president of the United States. So hopefully we can right that wrong in November and maybe the next administration will prioritize taking down all of the criminal activity or at least rooting out all the criminal activity from the previous administration. When Obama took office in January of 2009 he decided not to do that with the Bush administration. Let’s not investigate the torture. Let’s not investigate the lies that led us to war, the financial crimes, blah, blah, blah. Let’s look to the future and not to the past. No, the next president has to look to the past to ensure that our constitution is still standing in the future.