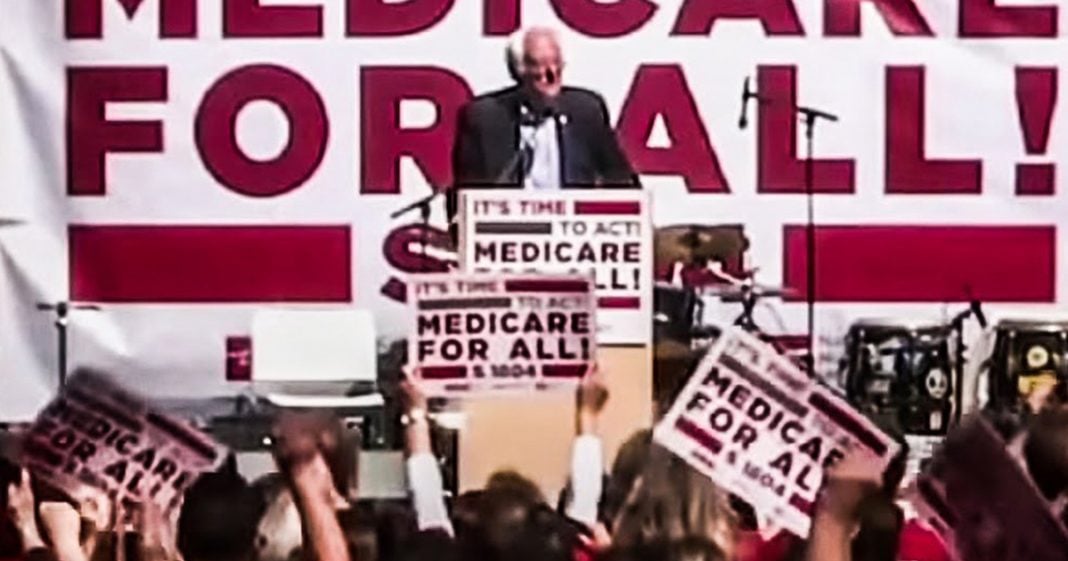 The Hill ran an op-ed from a medical professional this week where the doctor made the case that Medicare for All is the best possible system for the United States. Additionally, the case was made that simply offering a “public option” will do nothing to address the problems in the healthcare system. Ring of Fire’s Farron Cousins runs through these points and explains why we need to be listening to the professionals.

Earlier this week, The Hill ran an op-ed by a physician here in the United States and this physician actually made the case as to why Medicare For All is the best possible system for the United States moving forward and more importantly, why a public option is basically trash. The doctor laid out three points. First and foremost, a public option does not lead to universal healthcare or savings, and that is true. As I have said in the past, if the government offers a program, but that program is not universal for everybody, and that program has a budget that comes up every year for a vote, because that’s what budgets are, it will eventually be slashed. It’ll eventually be cut, it’ll be challenged in court just like Obamacare is. It’ll be stripped down to its barest form and eventually destroyed. That’s what a public option would do. Eventually, another Republican president would come along if we get a public option from the next Democrat and they would say, we don’t need this. We’ve got the private sector out there and they’re doing great work. We’re going to, we’re going to stop doing it.

But universal healthcare coverage on the other hand, couldn’t exactly do that without pissing off about 300 million people. Right? Because suddenly if every single person in this country has healthcare coverage and no payment due at point of service, and then you say, nah we’re going back to the old way. Yeah, you’re going to have a full blown revolution on your hands, and you’re quickly going to realize that, oh wait, we can’t do this. This thing, I guess is here to stay. That’s the difference between the two and I firmly believe that. Now, as for the other point there, it doesn’t reduce costs. That’s true. The argument we’re seeing now is that a public option would reduce the costs of private insurance because, hey, there’s a new competitor in the market, right? Insurance companies don’t care, and you’re an idiot if you think they do. People, millions of people over the last 20 years have been losing their health insurance because they simply can’t afford it. So rather than the health insurance companies saying, oh dear, we’re, we’re losing customers, we have to lower our prices. They said, no, we’re going to up them.

You can’t afford it. Fine die. We don’t care. We’re going to keep raising prices. They just raised prices again this year. They don’t care. They’re not going to lower their prices because there’s another option out there. They don’t do that. They don’t work like the rest of the alleged free market supply and demand system does. You know, if you make TVs for a living and your price them at $2,000 and nobody buys them. What do you do? You lower that price. It’s not that way with health insurance. The health insurance company says you, you can’t afford what we got? That’s too bad, man. It’s too bad. It’s like a bad drug dealer at that point. Nah man, that’s how much it is. You want this good stuff, got to pay that price. If not, get outta here. It’s the mafia and that’s what we’re dealing with and doctors know because they deal with it every day.

So on to the point number two from the doctor, a public option adds another fragment to an already ridiculous amount of fragmentation in healthcare. Now this is the part that doctors know better than anybody else. And the doctor goes on to explain it, saying that on average, doctors spend about $85,000 per year having to deal with health insurance paperwork. Three weeks out of their lives every year, having to deal with insurance company paperwork and the back and forth and all of this. So they actually lose $85,000 a year on just the fragmentation as they call it, of the healthcare system filing here, talking here, dealing with this, what is covered. The other one he talks about in this is a fact that each insurance company today is covering fewer and fewer doctors. They’re shrinking their networks and not expanding them. So even if you do have insurance, your options are being more limited now than ever.

And the final point the doctor makes says a public option will not stop the greed machines of the insurance industry and that kind of ties back into that first point. They’re greedy. They want that money. They’re making hundreds of billions of dollars per year, a piece. Their CEOs are pulling in $10, $30, $50 million a year, depending on how big the insurance company is. These folks aren’t hurting for money and they’re damn sure not about to give it up. They won’t have to give it up with a public option. They can keep gouging people for their services. Most people would be too afraid to switch off of their private insurance onto the public option because they don’t know if the public option is going to be there for them in a year. It’s a terrifying thought, and then Republicans will use that to say that the public option failed because not many people signed up for it. There’s only one solution, and that is what this doctor in so many other doctors and so many other politicians have told us, the only solution is Medicare For All. Anything else is not even a band-aid on the system. It’s just adding more complications to a system that’s already broken.