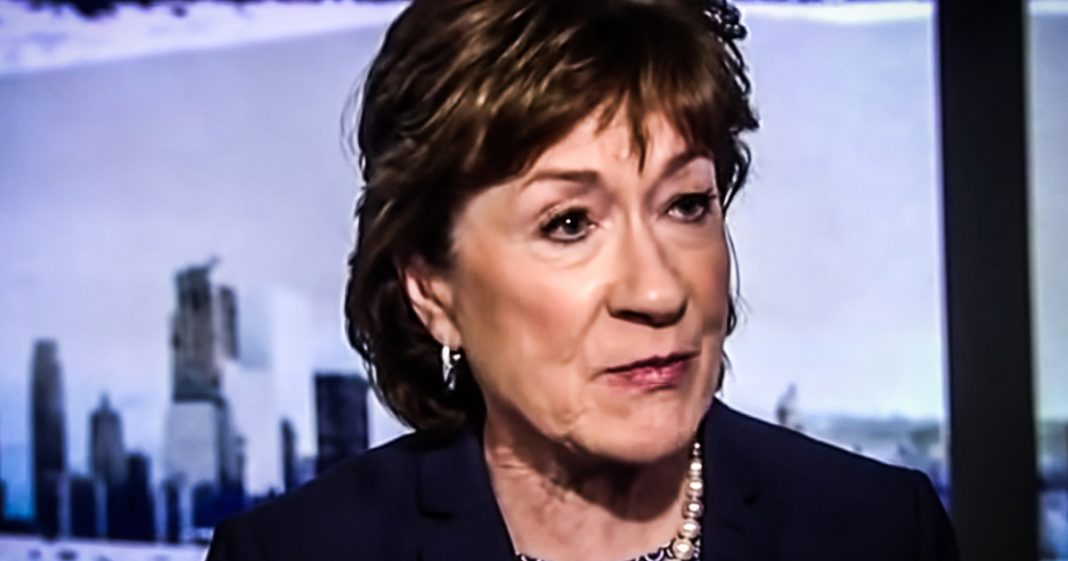 According to a new report, Republican Senator Susan Collins can’t seem to wrap her head around the fact that most people in her state simply don’t like her. Collins has no idea why this could be, and that’s the biggest shocker about this whole story. Collins’ façade of being a “conservative moderate” has fallen away, and voters now see who she really is, as Ring of Fire’s Farron Cousins explains.

The LA Times reported this week that Susan Collins, Republican Senator from the great state of Maine really doesn’t understand why voters in her state just simply don’t like her anymore. Collins is up for reelection this year and she is facing the toughest reelection of her entire career. She has a very strong Democratic challenger. There is money flowing in all over from all over the country into Maine for her opponent. She is, according to the latest polling, the least popular Senator in the United States finally beating out Ted Cruz for that honor and poor Susan Collins tells the paper, I just don’t understand. Why don’t they like me anymore? Susan, it’s actually really easy to understand. They don’t like you because now they see who you are. You know, Susan Collins has gone through most of her career having this undeserved title of being a moderate Republican, a reasonable moderate. Maybe I’ll go this way, maybe I go that way, Republican. But once Trump came along and people actually started paying attention to government, it’s kind of easy to see through that facade.

You know, we saw there was just an act and we saw it with Kavanaugh where Susan Collins came out and gave her stern, oh, oh man, this guy doesn’t seem good at all. What am I going to do? Well, I’m going to vote for him. And then same thing with all of Donald Trump’s other judicial nominees. The same thing with impeachment and conviction and all that crap. Susan Collins is who she has always been. It’s just that people are finally starting to pay attention now. Susan Collins didn’t change. The public did. You know, and It’s the same thing for people like Lindsey Graham. When you have all these people wondering, well, I wonder what happened to Lindsay Graham? No, nothing happened to him. What happened was you started paying attention, right? The media, it’s always the media. They create these personas and they attach them to politicians. Most of the time they stick because people don’t pay enough attention to see if what the media is saying about these people is real.

Susan Collins is a moderate because people called her a moderate, not because of what she feels, not because of how she votes, but just because some time along the way, the media just decided, pfftp, let’s call her a moderate and now she’s a moderate. That’s not how this works. It’s how it used to work back when nobody cared about politics, but people care now. They’re paying attention and we can thank Trump for that. He’s such a train wreck that people are actually starting to look at it and they’re starting to look at all these people who are enabling him, and Susan Collins is no exception. So Susan can sit there and wonder all day long, well, I haven’t changed. Why do people hate me? It’s not because you’ve changed. It’s just because people are finally paying attention to who you really are.