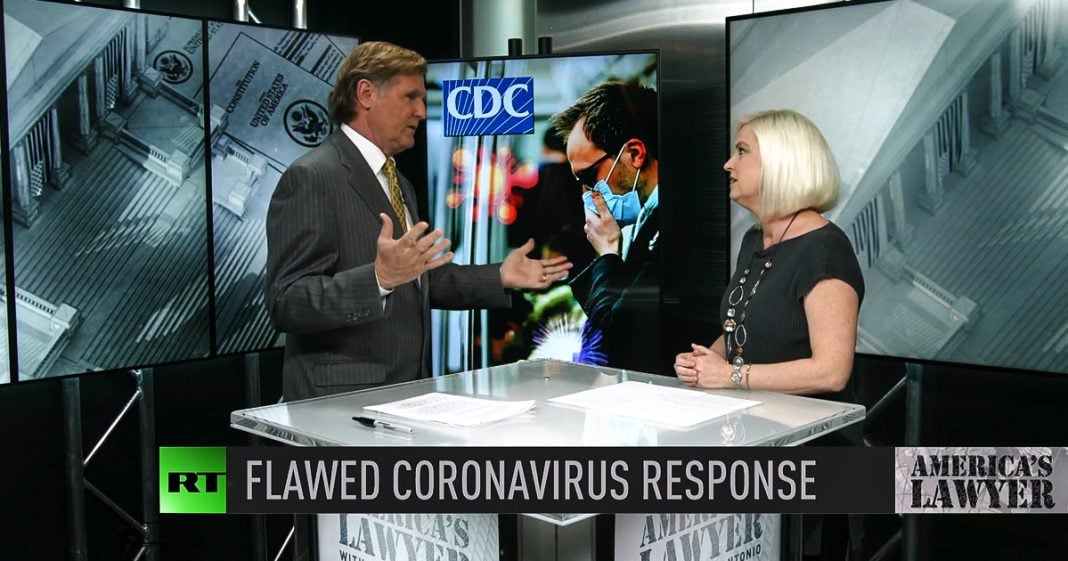 Via America’s Lawyer: Mike Papantonio is joined by legal journalist Mollye Barrows to point out the glaring mistakes by the Centers For Disease Control as they deal with the constant creep of Coronavirus, costing valuable time and resources while the US death count enters double digits.

Mike Papantonio:             The Coronavirus has made its way to the USA with a number of cases climbing steadily and now multiple deaths are being reported. While president Trump has boasted that the federal government is totally prepared to contain the outbreak, we’re already seeing some pretty big mistakes being made by the CDC. You know, this, this Mollye, Mollye.

Mollye Barrows:                That’s pretty much exactly what happened. So we’ve known since December that China has been dealing with the so-called Coronavirus. It’s a strain of a SARS virus, which is tested for fairly commonly, but it turns out the CDC did not have a test prepared and they didn’t want to use the world health organization’s test, so they could’ve gotten a jump on it. And it’s basically called surveillance testing, which is where you start testing certain populations that could be at risk to get a handle. Some people may have it not even realize they have it and that’s typical what tests, you know, disease doctors do.

Mike Papantonio:             They do surveillance testing around the area to see what’s the connection. They do this all over the world.

Mollye Barrows:                A total train wreck and it basically clicked into a whole domino effect of problems that were bureaucratic in nature. Red tape in nature, and then things that just make you go, what? Why would you do that? Beginning with why would you reject the world health organization, organization’s tests and instead they went with their own, which was far more complicated and not only tested for that particular strain of SARS, the Coronavirus 19 I think they call it, but it tested for other strains in the similar, similar strains of the SARS virus and that’s what the holdup was. So, and then you had only a few labs that could actually test for it. Then those first test kits that they sent out, they were saying that there was a problem with the control. So the tests were basically not working like they should then said the CDC, oh, we’ll send them back to us. We’ll test. Well that created more delays. You even had a guy or a patient I should say in California, they couldn’t even test him at the local hospital.

Mike Papantonio:             Okay. Was this driven, as I read this story, this had pharmaceutical industry all over it.

Mike Papantonio:             Now, what I mean is it looked like pharmaceutical industry wanted something else. Now there’s, it’s not been written about, but I’ve seen enough situations like this. It’s either, it is either a huge failer, failure of some knuckle brain bureaucrat. Somebody, somebody made this decision. I’d love to know who made this decision.

Mollye Barrows:                Well, and there’s no word yet and there are a lot of questions about that. Which government official decided they didn’t want to use the WHO’s test? Why did they decided they wanted to go with this expanded test? And then there are ,are so many bureaucratic rules in place that make it difficult for say like academic labs or other hospitals to create their own test because once the CDC declared that this was a public emergency it had set the FDA into gear, if you will, and now they have to approve certain labs. It’s basically raised the bar for the labs that do the testing. So now they’re trying to expedite all of that, cut through some of that red tape, make it available, make it so that more labs can do the testing. The FDA still has to review them and the CDC will be overseeing it as well. But basically all of this has created a huge delay and what they call that surveillance testing, which is getting a handle on how many, you know, we’ve got seven people dead in the US, 60 cases throughout the country.

Mike Papantonio:             The exact same thing they were saying here. But the CDC comes in, oh no, we’ve got something else we want to do it.

Mollye Barrows:                I don’t, I don’t disagree because even the FDA having to be involved, scientists were saying, hey, are experts who are responding to healthcare and you know crisis like this, were basically saying that the FDA, like I said, the public emergency declaration, the FDA had to kick in and raise the bar and then they had to suddenly get involved, which was another time consuming level to the process. They said that they were treating it essentially like it was a consumer product going to market. So that goes to show you that their processes in place are already geared more towards commercialism than they are towards responding to a public health crisis. Not to mention, why would you need to test for so many other forms or strains of the SARS at that time?

Mike Papantonio:             Yeah, exactly. They were, they needed to know one strain. Is it, is it, is it a problem? We do a surveillance test just like we did with SARS, just like you did with the swine flu.

Mike Papantonio:             I mean, there’s some of the best scientists in the world saying this is what you need to do CDC and some knucklehead says, eh, I want to do it my way.

Mollye Barrows:                Right, and they basically have been dragging their feet because they wanted to do it their way. And now the question remains because nobody’s giving clear answers is did they do it because it was just more bureaucratic feet dragging? Because this is, we do know better, we’re the United States, we can handle this? We’re the CDC the preempt, you know, pre, preeminent lab in the, in the world. Or is it because there was a, another agenda? Did they want to gather that information for testing for other strains? It certainly didn’t show a sense of urgency, otherwise you would limit it to just the one test.

Mollye Barrows:                You know, and if you don’t have that sense of urgency, why not? And is there a more lucrative reason, perhaps a relationship with a pharmaceutical company or somebody else that enabled them to want to expand that testing?