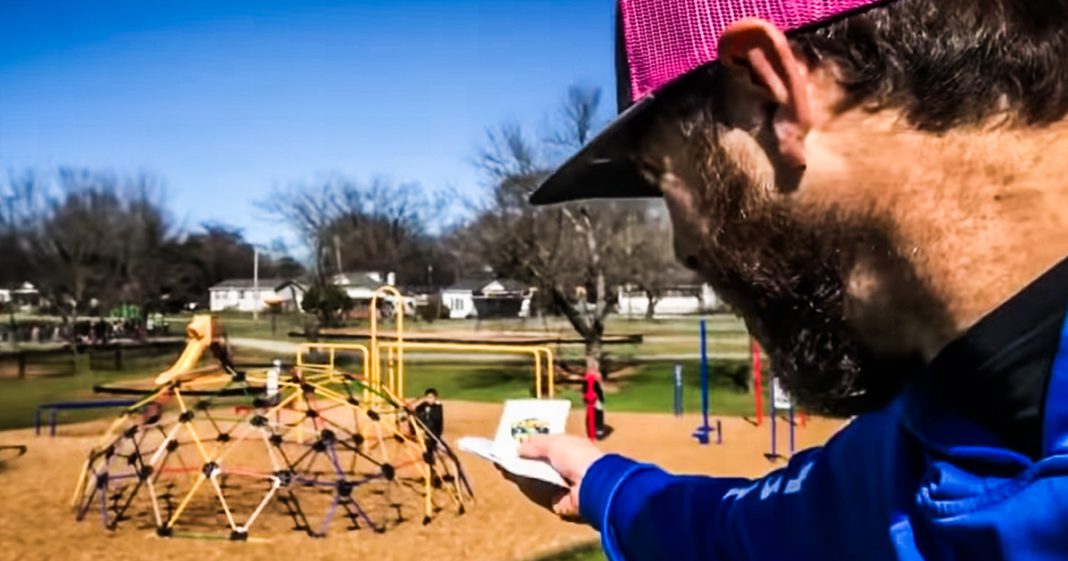 A prominent flat earther named Nathan Thompson was arrested recently after he videoed himself yelling at children on a playground that the earth is flat and that “large bodies of water do not curve.” The incident took place at a South Carolina school, and the video shows just how obnoxious and creepy Thompson was acting with these elementary school kids. Ring of Fire’s Farron Cousins discusses this.

According to reports, a prominent flat earth conspiracy theorist by the name of Nathan Thompson was arrested recently after showing up at a school playground and yelling at the children about the earth being flat. He even brought some pamphlets with him so that the kids could read for themselves and do the research as he tells them. And luckily Thompson actually videoed the event. So take a look at just a small portion of what Thompson was doing to these poor children on this playground.

Now if my children, if they lived in South Carolina, went to that school and were on the playground at that point, I would personally be pressing charges against Nathan Thompson. And I know, yeah, reports say that he was arrested for this and probably nothing will come of it. But the parents of every single child on that playground should be pressing charges. This is harassment. This is creepy as hell and this is something that cannot stand. And Thompson, if he has any money, needs to be the one responsible for now having to pay for much better security apparatus around that playground so that creeps like him, can’t get that close to children. That’s what this is about. This isn’t just about the fact that, oh, he’s a flat earth or, and that’s funny because they’re dumb. Yes, it’s true. It’s funny because they’re dumb. But this is a threat to those children. Any creepy man like that can walk up to that fence and start handing things to kids. No, that’s really bad and that’s also not a smart decision on behalf of the school.

And hopefully they will upgrade their security apparatus around that playground so people like Thompson can’t go up there like that anymore and again, Thompson needs to be sued and he needs to be the one to pay for it. But let’s get to the actual flat earth part of this right? He says, you know the ocean doesn’t curve. You know oceans can’t curve. What the hell are you talking about? Yes, yes they can, actually. The center of gravity is the earth itself and the water clings to that like a ball. Not to mention the fact that if you go and you look at the water, do you see every single boat on the water all around or excuse me, all across the flat earth? No. You note because the earth curves, I don’t understand how this conspiracy theory was, was brought back to life. It was honestly never even a widely held belief hundreds of years ago. There wasn’t a widespread consensus ever that the earth was flat. We knew this thousands of years ago and yet these lunatics picked up on this, misinterpreted what happened in history and suddenly decided, you know what, yes, the earth is flat. The North pole’s the center of that flat disc and the South pole is a wall of ice around the border, which is what prevents all the water from running off.

That’s actually what they believe, folks. So the big question is, if you’re a flat earther, and suppose you’re right. Why, why is the government hiding this? Why? What, what do they have to gain from the earth actually being flat and not telling us that it’s actually flat? That makes no sense. See, conspiracy theories, folks, when you craft them, you got to have a reason behind it, right? Look at all the great conspiracy theories through American history. There’s always a reason why thing X was done. You know, oh, they, they, they had this guy assassinated because blah, blah blah. But for the flat earth thing, they’re lying to you about the earth being flat because, I don’t know, they’re bored? No, nothing about this theory makes any sense. Science says you’re wrong. Your own eyeballs should be able to tell you you’re wrong and Nathan Thompson should never be allowed around children for the rest of his life.