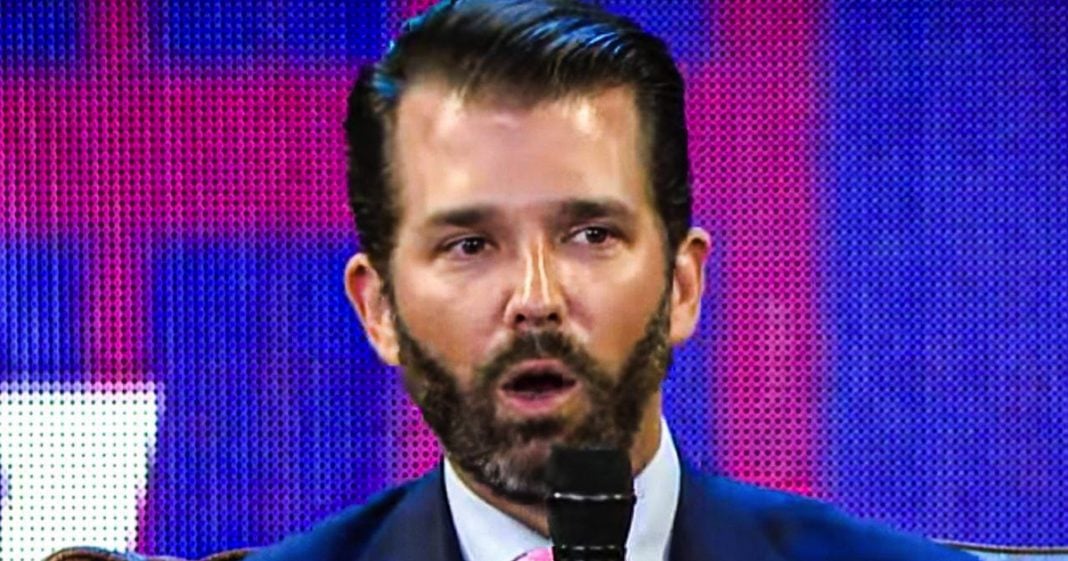 Donald Trump, Jr. tried to claim that the Biden children have benefited from nepotism and cashing in on their father’s name, without any sort of self-awareness that he LITERALLY has been cashing in on HIS name for his entire life. Junior was met with scorn and derision online, but that’s not the point – These Trump kids honestly don’t know that they are guilty of the same thing they accuse Hunter Biden of doing, as Ring of Fire’s Farron Cousins explains.

That’s nepotism, Donnie Jr. and you don’t even see it. Now obviously the internet roasted Trump for this. It was glorious to behold because most people in this country understand that, yes, Donald Trump Jr., Eric Trump, Ivanka Trump, they have been cashing in on Donald’s name since the day they were born. Since they could first learn to talk, they knew that they were privileged and it all came from dad. They’ve done nothing for themselves, never have, never will. They’re just coasting on his coattails and it’s probably not going to take them too much farther. But here’s the problem with this. As I mentioned, Donnie Jr. doesn’t understand. He honest to God doesn’t think that this also applies to him. He doesn’t think nepotism runs in the Trump family, but it does in the Biden family and he’s going to keep talking about that. And no matter how many gotcha quotes people put on Twitter, roasting him, making fun of him, mocking him, whatever it is, it’s not going to get through to him and he is going to continue to say these things and Republicans are going to continue to eat it up.

You know we have a choice right now. Do we want to hear about Hunter Biden and Ukraine and Burisma for the next 10 months and possibly the next four years after that? Or do we want to be talking about issues like Medicare For All, a green new deal, debt free college, things like that? That is the choice that Democratic voters still can make and we can make it correctly. And in case you’re on the fence, let me tell you, talking about Hunter Biden for the next 9 or 10 months isn’t the right choice. Republicans would love nothing more than that opportunity. So I strongly suggest that you do not give it to them.