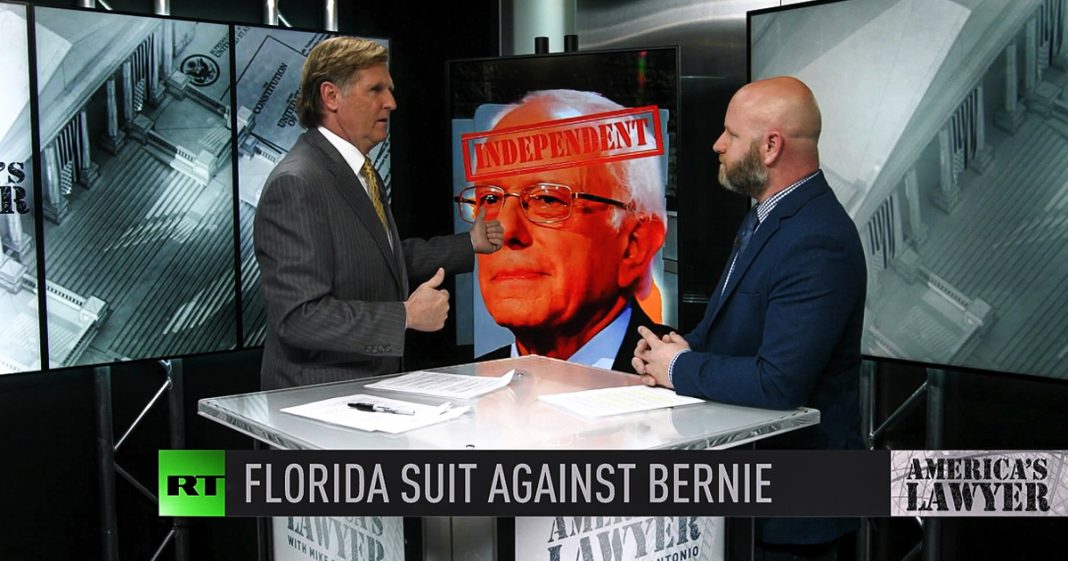 Via America’s Lawyer: Florida Democrats are filing a lawsuit to have Bernie Sanders kicked off the Democratic primary ballot, insisting he ought to be labeled as an independent. Mike Papantonio and Farron Cousins discuss.

Mike Papantonio:             Two Florida men have filed a lawsuit against the Democratic party in Florida to prevent Bernie Sanders from even appearing on the ballot for primaries. What’s your take on, any surprise here, really?

Farron Cousins:                  No. I mean we, we have some hardcore centrist Democrats here in Florida who do not like Bernie Sanders. We also have plenty who do like Bernie Sanders, but these two men from the Florida panhandle decided, you know what? We want to make a big stink about this. We want to get some national attention saying we don’t like Bernie and that’s what this is. This is a huge publicity stunt. They know, they don’t really have a strong argument here because the Democratic party of Florida decides who can be on that ballot and they already decided.

Mike Papantonio:             This is a bigger story. I love the fact, you know, Matthews, Chris Matthews just loses his job. You know, they say, well, he, he attacked, he attacked Bernie by the whole Nazi example. But here’s, here’s the heart of that. Matthews got his marching orders from Phil Griffin who runs MSNBC. Just like the folks at CNN get their marching orders, defeat Bernie Sanders. It’s not just in politics, it’s in the media and, and so right now, if you take a look at the sites today, they’re already saying Biden, Biden’s going to be the guy because Obama, as we speak, is making telephone calls all over the country saying defeat Bernie Sanders. Obama’s doing that, defeat Bernie Sanders. It’s just a rehash of what we saw with Hillary Clinton. If Biden’s there, he’s going to lose again. He’s nothing more than Hillary Clinton with a little better personality. That’s all it is.

Farron Cousins:                  Well, and a little less mental capacity at this point it looks like too. I mean, Joe Biden has all of the problems that Trump has, but none of the charisma to at least generate some kind of enthusiasm. You know, love him or hate him Trump generated enthusiasm among his base. Bernie Sanders generates enthusiasm with his base. There’s nobody out there screaming and cheering and lining up by the 10,000 for Joe Biden.

Mike Papantonio:             But, let me take a sideways on this. Okay. The Matthews, they got rid of Matthews. The talking point was he did wrong. You know what the real truth is? They got rid of Matthews because he was being paid too much money. You’ve got MSNBC going down the tubes as far as viewers, 30% down, just like CNN. So all these old guys who have been there on a big contract are losing their job. Look out Joe Scarborough. Huh? Isn’t that, but the point, the point is, as we, as we follow this media and we actually look at the hysteria that the media has created, it’s not just taking place in the management of the DNC. The management of the DNC is so closely aligned with the MSNBC’s, the CNN. Bernie Sanders is history.

These people are going to make him history and he’s the best shot at beating Donald Trump. Bernie Sanders can beat Donald Trump. Just like we said last time when they put Hillary Clinton, remember time and time again, Bernie Sanders can beat Donald Trump and I say it this time, but they’re not going to do it if he doesn’t, you know. Is he going to be by way of floor fight or it’s going to be way of just sheer numbers, but we’re going to find that Joe Biden, it’s like taking a a square peg and trying to put in a round hole to make this fit, isn’t it?

Farron Cousins:                  Absolutely, I mean, Bernie Sanders is the, the best polling person right now, especially against Donald Trump. His ideas are more popular than everybody else. Biden offers nothing. What Biden offers is a return to what they’re calling normalcy, which means, okay, well the president doesn’t get on Twitter all the time and then nothing else changes.

Mike Papantonio:             Yeah. Goldman Sachs makes decisions. Boeing makes decisions on who we go to war with. That’s the normalcy that the Democrats want and it’ll tear this party apart. There will be Progressive’s who will not show up for the general election. I don’t care how much they hate Trump. They hate what has happened to this very decent man. They’re going to hate what’s happened and they’re not going to show up and this is exactly the same thing we said last time again, and it wasn’t just us, it was, it was all, it was progressive’s all over the country.

Mike Papantonio:             They called us Bernie bros. Act like we we’re some kind of crazy people because we cared enough to the fact that we wanted a candidate that could really win. Biden half the time doesn’t even know where he is.

Mike Papantonio:             You know, he said, I’m waiting for Super Thursday and here I’m in Nevada and he’s in Colorado. I mean, it just goes on and on and in the general election you’re going to see it even get worse.

Farron Cousins:                  He doesn’t understand and we could have real positive change in this country, but it would require Wall Street to pay a little bit more and that’s unacceptable for them and the DNC is willing to tank themselves to make sure it doesn’t happen.

Farron Cousins:                  I think Obama, like the rest of the establishment, and he is, is terrified of what is going to happen to this party is Bernie Sanders takes over. It’s going to put it in the right direction and they don’t want to see that because it’s going to cost them some money and so he’s doing all this behind the scenes shadow work and it’s going to crater the party and destroy 2020.

Mike Papantonio:             Yeah, God forbid we ought to have a Democratic party that actually represents the American public. Farron, thank you for joining me. Okay.