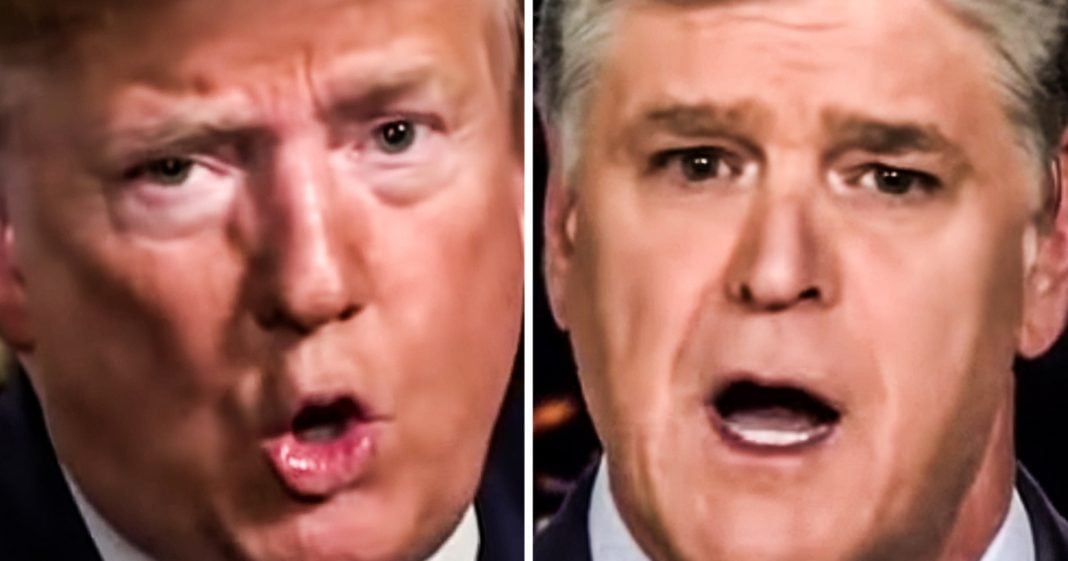 Donald Trump couldn’t be handling the coronavirus outbreak any worse than he is, and at this point he actually appears to be on the side of the virus. During an interview with Sean Hannity on Wednesday evening, Trump actually told the audience that coronavirus patients need to go back to work and just try to “feel better.” If people take his advice, this disease will spread like wildfire, as Ring of Fire’s Farron Cousins explains.

Last night, Donald Trump appeared on Sean Hannity’s Fox news program to once again spread more lies and misinformation about the Coronavirus and the potential pandemic here in the United States that is now spread to 15 different States and as of me sitting here right now has claimed 11 lives. But Trump doesn’t want this to be taken seriously. He doesn’t want people freaking out. He doesn’t want this to affect the economy or, you know, make him look bad because he’s bumbling through the response to this. So he told Sean Hannity last night that sometimes even if you get this virus, you should still just go to work.

Here’s exactly what Donald Trump said. A lot of people will have this and it’s very mild. They’ll get better very rapidly. They don’t even see a doctor. They don’t even call a doctor. You never hear about these people. So you can’t put them down in the category of the overall population in terms of this Corona flu and or virus. It’s not a flu by the way, folks. So you just can’t do that. So if, you know, we have thousands or hundreds of thousands of people that get better just by, you know, sitting around and even going to work. Some of them go to work, but they get better. Folks, I can’t stress this enough right now. If you think you have the Coronavirus don’t go to work. I mean, that’s literally what the CDC is telling us. That’s what doctors are telling us. That’s what companies are telling their own employees now. If you think you have this, stay the hell home. Get to the doctor, you know, get yourself checked out and find out what is going on because we don’t want this thing to spread because it is highly contagious.

Now, as I have said before, there was a time in the early days of this where I was skeptical, right? And we all should be skeptical at times because we have seen the media hype up things that turned out to be big old nothings. I’m no longer skeptical of this and I do believe this is something that should be taken seriously and we need to listen to the advice of experts, not morons going on Sean Hannity’s Fox news program telling us, yeah, if you got it, go to work. You probably don’t even, probably not even going to notice, right? No, because guess what? You can get diseases and be asymptomatic. You know, maybe you got a slight cough, maybe you had a light fever for half a day. That virus is still in you and you may think, well, I guess I’m fine enough to go to work.

It doesn’t matter how you feel because you could have somebody in your workplace that has a compromised immune system. You could have somebody that goes home and gives that virus to their children. Maybe their children have compromised immune systems or other underlying conditions that could easily leave them dead from this virus. That’s on you at that point. That’s on you if that happens. Don’t, my God, I can’t believe I’m about to say this. Don’t listen to the president of the United States about this pandemic. That’s a terrifying statement and I think one of the reasons I’m no longer skeptical of this is because I’ve seen how horrible the government’s response to it has been. If we had a competent person sitting in the White House, I probably wouldn’t be all that concerned. I wash my hands a lot throughout the day, and that’s what doctors say you have to do.

Not that that’ll totally prevent it by any stretch of the imagination. But I am hygienic. I take care of myself. And if we had a decent person in the White House with half a brain, I’d probably be like, okay, yeah, this is, you know, this is going to be okay. But we don’t. We have a complete and total moron who is so far butchered each and every response to this, and now he’s out there lying to us about it. This is dangerous. Donald Trump’s lies are going to infect hundreds of thousands more people. Honest to God, at this point, it feels like Donald Trump is siding with the virus, like he’s somehow working for it and trying to get it to spread further throughout the United States. The man is an idiot and at this point, so is anyone who takes his medical advice.