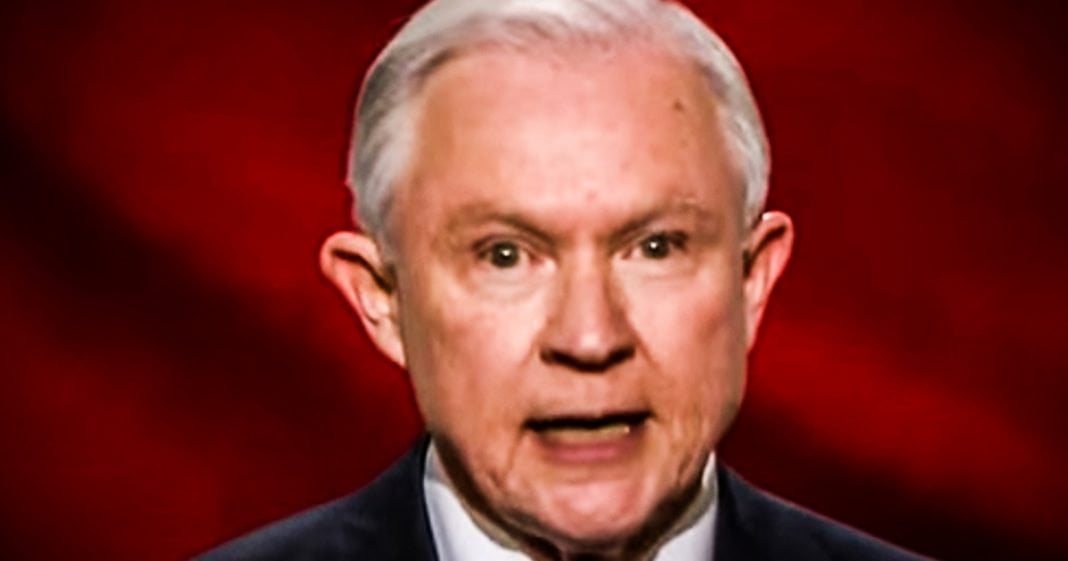 Former Attorney General Jeff Sessions is running for Senate in Alabama again, hoping to regain the position that he had held for 20 years before joining the Trump administration. And during a runoff on Tuesday, he failed to secure enough votes to get the nomination, and he now heads to a runoff. Trump took to Twitter to openly mock Sessions for not winning, and then issued an ominous warning to other “disloyal” members of his cabinet. Ring of Fire’s Farron Cousins discusses this.

Now that most of the dust has settled from Super Tuesday, we can move on from the presidential races to the Senate races and in fact, there’s really only one Senate race that I actually want to talk about right now. And that was down there in the great state of Alabama, my next door neighbor here, and Jeff sessions who was running to reclaim an Alabama Senate seat like the one he had held for more than 20 years before he became Trump’s attorney general. He didn’t win, folks. He didn’t win the primary. In fact, he actually came in second, but it was close enough and no voter, no candidate received a majority of votes. So now it goes to a runoff between Jeff Sessions and former Auburn head football coach Tommy Tuberville who got 32% of the vote to Session, Sessions’ 31%. Now, okay, that’s interesting enough, right?

But it’s what Donald Trump tweeted out about this race that was just so delicious and here it is. This is what happens to someone who loyally gets appointed attorney general of the United States then doesn’t have the wisdom or courage to stare down and end the phony Russia witch-hunt. Recuses himself on first day in office and the Mueller scam begins. So folks Donald Trump, not only is he mocking Jeff Sessions for not being able to pull off this victory, a victory he had pulled off countless times in the past during his numerous runs for Senate, but he’s also issuing, issuing a shot across the bow there. Don’t be disloyal to me and bad things won’t happen to you. I got your back, you get my back, everybody gets along just fine, but if you cross me, if you cross me, it’s going to cost you. That is what this tweet means and honestly, I am shocked that Sessions did not win this primary, and I’m even more shocked as an Auburn college football super fan here, that Tommy Tuberville technically pulled out the majority of the votes or the plurality of the votes in that particular race.

Now, for those of you not familiar with Auburn college football or Tommy Tuberville as a head coach, let me go ahead and tell you as somebody who watched every single game Tuberville ever coached. The man is lazy, the man doesn’t care, the man doesn’t have emotion and the man just kind of gives up trying. So if he becomes the Republican Senator from the state of Alabama, he is going to go along with whatever the Republican caucus in the Senate wants him to do because he doesn’t want to think. He doesn’t want to get active. He doesn’t want to have to do stuff. He gets complacent. That’s actually why he was fired as Auburn’s head coach and that’s just a little sports history tying into political futures that I think everybody should know about.

But honestly, back to the big issue here, Trump is making fun of Jeff Sessions and that’s fun. We like that. Trump is threatening people who are disloyal to him, which is obviously not something that’s okay. But he starting to see it a little more and more, right? This wasn’t just a warning to people like Jeff Sessions. This was a warning to people like Mitt Romney. This was a warning to all of those never Trump Republicans out there writing for their prestigious newspapers. If you turn on Trump, your life is going to end up miserable one way or another. Karma is going to come out and get ya, and if it doesn’t, than Trump himself will.