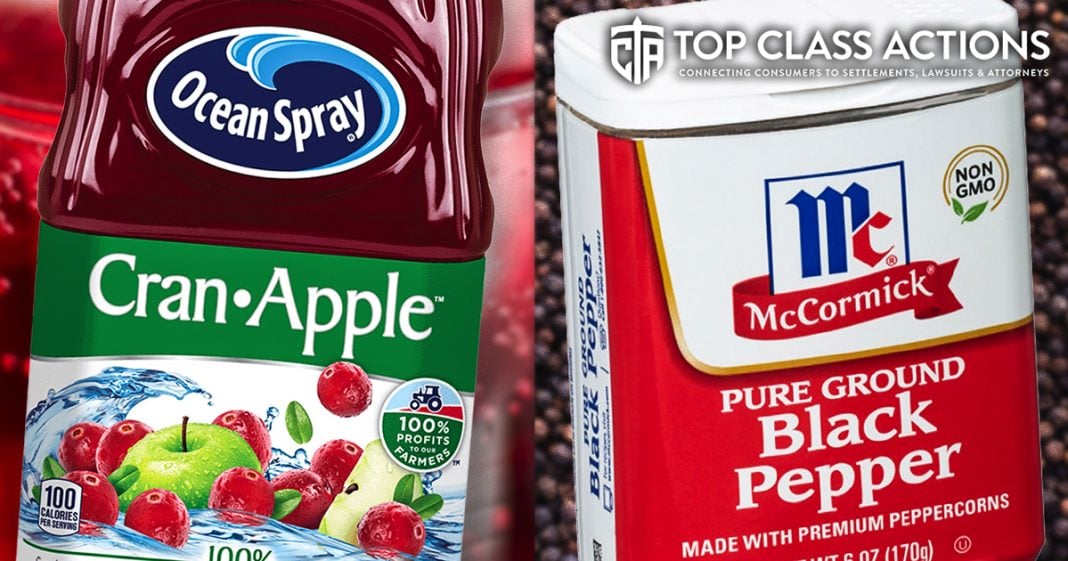 Several major food makers, including Ocean Spray and McCormick, have recently agreed to millions of dollars in settlements for consumers. Ring of Fire’s Farron Cousins talks with Scott Hardy, the President of Top Class Actions, about the underlying lawsuits and how consumers can apply for the settlements.

Farron Cousins:                  Recently, several food makers and manufacturers here in the United States agreed to millions of dollars worth of settlements to customers who had joined in class action lawsuits against these companies. Joining me now to talk about these two settlements is Scott Hardy, the president of Top Class Actions. Scott, let’s take this one at a time. Let’s start with Ocean Spray. Very well known name. Everybody knows what it is. We see the commercials all the time. They had been sued for what?

Scott Hardy:                          No artificial flavors they said on their bottle. This is no high fructose corn syrup, artificial colors or flavors, but unfortunately for them they had malic acid. Malic acid is an artificial ingredient that is derived from petrochemicals and so they’ve fought this class action for awhile. We covered it and now they’ve ended up settling it for $5.4 million. That settlement will provide a dollar in cash for each bottle purchased up to 20 bottles. You’ll have to go ahead and state each date that you pack, purchased those bottles. Don’t have to have proof of purchase for that. You may be able to claim more if you kept your receipts, but without receipts you may be able to get up to $20 from this Ocean Spray artificial flavors class action settlement.

Farron Cousins:                  And see, you know, this is just one of those instances where we want to hit on again, once you buy your groceries each week, even if it’s a very long receipt, you know, just snap a picture of it real quick. That’s all you have to do. And that way you have this on file because Ocean Spray for those people who do drink this, that is one of those like buy it every week kind of thing. So it would typically be on your receipt each week. A bottle’s not going to last you much longer than that if you actually drink it regularly. So yeah, this would be one of those times where you could go back and say, oh cool, I spent five seconds, you know, taking a photograph of these receipts.

Now I get 20 bucks, maybe even more than that because I have all these proofs of purchase. So, you know, that’s just something, again, always keep that in mind folks. It takes a few seconds and it could absolutely be worth it. We have another one here too, McCormick pepper, my pepper brand of choice at the house. What’s happening with these folks?

Scott Hardy:                          So McCormick pepper got hit with the slack-fill lawsuit and this class action alleged that, you know, you had a large package but there just wasn’t that much pepper in there and they settled this one for two and a half million dollars. But the caveat is right now this settlement only affects consumers in California, Florida, you’re welcome Farron, and Missouri. So if you have, if you’re a regular purchaser of McCormick black pepper, you’ll be able to claim $4 or the actual cost, whichever is greater per container. We expect that consumers with no proof of purchase will be able to claim two containers for a maximum of $8 without proof of purchase. But again, just like you said, if you’ve got those receipts, you should be able to claim more and put more money in your pocket.

Farron Cousins:                  Well now here’s one of those times when I have to, you know, be a little more honest. I do not have copies of any of my receipts here and that is, that is disappointing. You know, especially sitting here and telling people you all should do this, but listen, we’re not all perfect and now, now I know this is definitely something, I know I’ve said it a thousand times, I’ve got to do a better job of doing this because, you know, I may have lost eight bucks. But hey, it’s eight bucks that, that is, you know, a movie ticket at the theater near my house. So yeah, it’s, you know, it, it matters. But more importantly, oh.

Farron Cousins:                  Absolutely. But see, the big thing here too, it’s not always about the money. It’s not about, you know, the eight bucks, the 20 bucks from Ocean Spray or whatever it is. It’s about making sure that companies do the right thing. Right? There is no reason for slack-fill in a little tin of pepper, right? It doesn’t need to be protected. It doesn’t need that air to keep the pepper safe. It’s ground up peppercorns. With the Ocean Spray, there was no reason other than for marketing purposes to say there was no artificial flavors when you knew there was an artificial flavor made from petrochemicals. This is about making corporations do the right thing, giving you what they’re advertising or changing their advertising to reflect what they’re actually giving you. That’s always the point of these things, isn’t it?

Farron Cousins:                  Absolutely. For anyone who needs more information on how to apply for these settlements, follow the links in the description of this video. Head over to top class actions and make sure you sign up for their weekly newsletters. You’ll be kept up to date on stories like this on new settlements that I promise you you’re probably going to qualify for a lot more than you even realize. Scott Hardy with Top Class Actions, always a pleasure talking to you. Thank you.