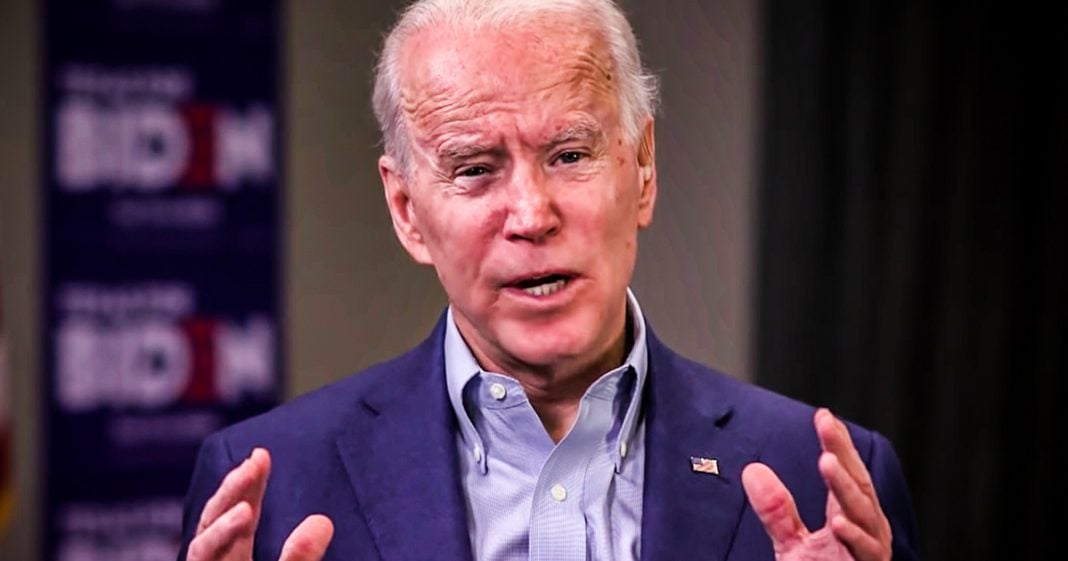 Joe Biden is now the Democratic frontrunner, but there is a lot of time left in the primaries. And that’s a good thing. Biden has so much baggage that Republicans will have a field day if he becomes the nominee, and they are already trotting out all sorts of attacks on Biden since his Super Tuesday victories. Ring of Fire’s Farron Cousins discusses the Biden Baggage and what it will do in a general election.

All right, with Joe Biden now officially the Democratic front runner, it’s time to take a good hard look at what kind of a candidate Joe Biden is going to be and the reason I say that is because Republicans are already doing it. On Wednesday, day after Super Tuesday when Biden officially did become the front runner, Fox news programs were talking about Joe Biden’s alleged dementia, his cognitive decline. They were showing clips from speeches where he didn’t know what he was talking about, mocking him, making fun of him, which I do not think you should do at this point. But they’re actually raising very serious questions, questions that, believe it or not, folks are going to resonate with the American public. Now, as I said, you should not mock Joe Biden or make fun of him for what’s happening to him. But at the same time, I do firmly believe that we are witnessing cognitive decline. Last night I watched an interview from Joe Biden from 2016, it was shocking.

The man didn’t stutter or stumble. He didn’t not finish his sentences or finish his thoughts. He didn’t say anything weird or crazy. He just gave a straight calm interview where he was able to articulate his thoughts incredibly well. And you compare that with what we see today and yeah, there’s a big issue. There’s a big problem, and Republicans less than a day, less than a day after he becomes the front runner are already running this nonstop. This is going to be the big campaign issue and that’s just one of the many pieces of baggage that Joe Biden brings to this election. Baggage that the corporate media, other than Fox news, is ignoring. These are serious issues, folks. If we want this guy to have a shot at beating Donald Trump, we need to vet him properly and get these things out in the open while we still have two thirds of the delegates available and we can right this train. As I mentioned, that’s just one of the pieces of baggage, Joe Biden’s obvious cognitive decline. We have other things that Donald Trump and the Republicans are going to pounce on. For example, his vote for the Iraq war.

Most people now think that, hey, that’s a really horrible thing that you did there and it’s horrible that you even came back later and defended it. Trump didn’t vote for the Iraq war and he is on record at the time saying he didn’t support it. So in this particular instance, Trump is going to try to paint himself as the anti war candidate, and Joe Biden is going to be painted as the pro war candidate. Now we know it’s not true, folks. We know that that is not true. Joe Biden doesn’t have a good record on it, but Trump’s not anti war by any stretch of the imagination. He’s out there using drones and bombing and selling weapons. He is a pro war person. But we know that because we’re plugged in, we do this on the regular basis. You’re watching this video because you know and understand politics.

Majority of people in this country don’t. They don’t know that. So Trump’s gonna run an ad calling Biden pro war, calling himself anti war, and most people in the public will never look beyond that ad. So that’s a massive liability for Joe Biden. Taking corporate money, massive liability for Joe Biden among the progressive wing of the Democratic party. We’re not happy about that. We don’t want to go back to the days of the Obama administration where the bankers literally get to break the law all the time and the DOJ just slaps them with a moderate fine that is far less than the profits they made off the crime that they committed. So they pay a small fee and then they go on their way. None of them go to jail. We’re sick and tired of this. Let’s have the bankers, let’s have the fossil fuel executives, let’s have all of these CEOs out there face the same kind of justice that anyone else in this country would face if they didn’t have $10 million sitting in the bank.

That’s something we need to do. And then of course there’s the biggest issue of all and Lindsey Graham did a great job of highlighting this yesterday saying, oh, we’re going to start talking about it, and that is Ukraine, Burisma, Hunter Biden. We are going to be inundated for the next eight months with nonstop talk of how Hunter Biden broke the law. Joe Biden broke the law. They were working with Ukraine. They were conspiring. There was a quid pro quo somewhere in there probably. Those are all talking points that by the way are completely false, totally false and we know that, again, because we pay attention, the public doesn’t. So they’re going to run ads saying that Hunter Biden is corrupt, saying that Joe Biden is corrupt, saying there was some kind of unholy deal between them and Burisma and Ukraine and most people in the country are going to believe it. And we know that one, because they literally told us yesterday, but two, the latest round of polling shows that 57% of people in this country think that what Joe and Hunter Biden did in Ukraine is a scandal, 57%.

Contrast that to only 47% who think it’s a scandal that the Senate didn’t convict Trump. More people in this country think Joe Biden should be accountable for breaking the law then think Trump should, and really folks, only one of those people actually broke the law. I do not think for a second Joe or Hunter Biden did anything illegal with this. Does it look bad? Probably, yeah. But was it illegal? Nope. And does that matter for the average American citizen out there who doesn’t know anything of what’s happening? Nope. And that’s the danger. Even though that whole scandal is imaginary, it is still baggage. Because if it gets brought up or, excuse me, when it gets brought up, Biden’s gonna be, you know, oh boy, no, no, no. I here, here’s the true. Here’s the truth, folks. Here, there’s no malarkey here. And people are going to be, what the hell is he? He’s not, he’s not giving us a clear answer here. He must be guilty. That’s how people think, folks. That’s how voters think.

Joe Biden has a 0% chance of beating Donald Trump in a general election. He just, I’m sorry, there’s no chance at all. If he becomes the nominee, and we will know that at that Democratic convention in July, the election’s already over. You know what’s the point? Trump will beat him. Trump will destroy him, and then we get another four years of everybody saying, I told you so. But the establishment won’t care. They’ll make the same mistakes in 2024. Anything to avoid admitting, yeah, once again, we put up a hugely flawed candidate because we, just like the Trump supporters, didn’t want to live in reality.