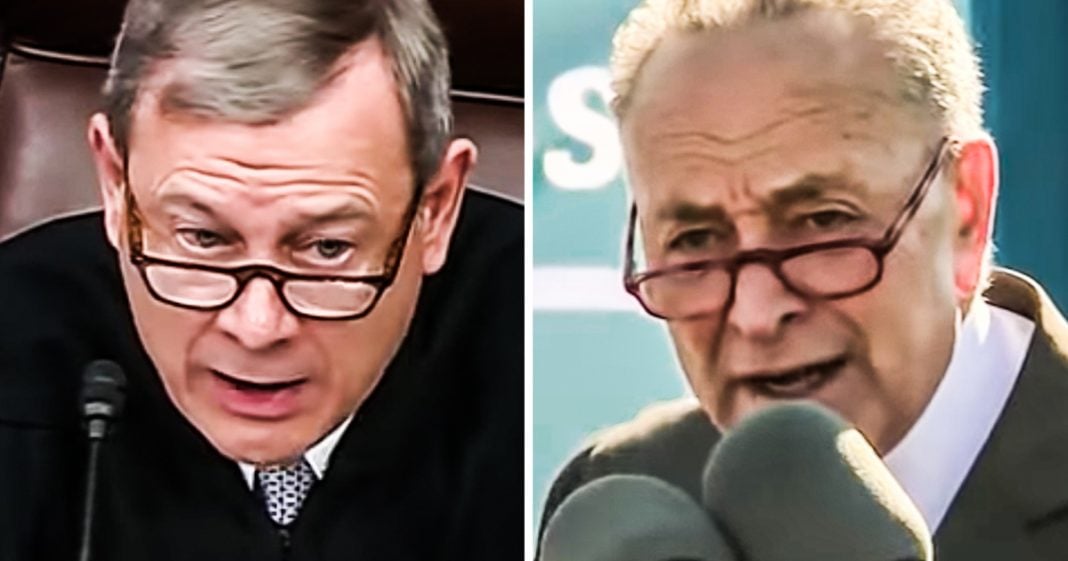 Supreme Court Chief Justice John Roberts issued a condemnation of Democratic Senator Chuck Schumer this week, after Schumer spoke at a rally about the threat to women’s reproductive freedom coming from justices Gorsuch and Kavanaugh. Roberts was furious over the comments, which he perceived to be a threat, but he should really be upset about the fact that ideology drives the court, not legal arguments. Ring of Fire’s Farron Cousins discusses this.

John Roberts, the chief justice of the United States Supreme Court wants to remind everyone that he is in fact a complete partisan hack and he did this yesterday after he officially reprimanded Democratic Senate minority leader, Chuck Schumer, after Schumer during a speech at a reproductive rights rally said, you have released the whirlwind and you will pay the price. You will not know what hits you if you go forward with these awful decisions. And this was a direct attack on both Neil Gorsuch and Brett Kavanaugh as the US Supreme Court is considering a case that could severely hinder women’s reproductive health here in the United States. Schumer was out there defending women, fighting with women, and he took this shot at both Gorsuch and Kavanaugh because they’ve made it clear that they don’t care about precedent. All they care about is their ideology, which tells them they have to outlaw abortion, whatever it takes.

John Roberts was upset with Schumer for saying this and he lashed out at Schumer saying, justice’s know that criticism comes with the territory, but threatening statements of this sort from the highest levels of government are not only inappropriate, they are dangerous. All members of the court will continue to do their job without fear or favor from whatever quarter. Now the interesting thing about Schumer’s statement there is that, yeah, obviously it was pretty fiery, right? And it was also lifted directly from what Brett Kavanaugh said during his Senate confirmation hearings. Schumer didn’t just make this up. Schumer didn’t get lost in the moment and said this allegedly threatening message. No, he was paraphrasing Brett Kavanaugh himself and I refuse to believe for even half a second that John Roberts didn’t know that. John Roberts knows exactly what Brett Kavanaugh said. Everybody was watching those hearings. Everybody remembers those hearings, especially the people who now work with Brett Kavanaugh on a daily basis.

Roberts knew what was happening there, but he wanted to use this as an opportunity to berate Chuck Schumer. To act like the Democrats are the ones out there being crazy and inspiring violence, when in fact it’s the other way around. We have seen countless people arrested for threatening or for attempting to carry out these violent acts against progressive’s based solely on things that they heard from Donald Trump. Things that they heard from Ben Shapiro. Things that they heard from other right wing talkers. That happens all too frequently and John Roberts here wants you to know the Democrats are the ones using threatening and dangerous language out here when in reality, Roberts, that was your good buddy and coworker, Brett Kavanaugh, who did that. Also, lots of folks have pointed out we didn’t see you, John Roberts, get all up in arms when Donald Trump attacked two members of the court just a couple of weeks ago, Sotomayor and Ginsburg, called them partisans, said they should recuse themselves from any case involving Donald Trump. You didn’t speak out against that. I wonder why. Well, don’t have to wonder because you’ve made it abundantly clear with your little outburst yesterday. You are a right wing partisan hack who has no business on the highest court in the land, let alone being the chief justice on the highest court in the land.