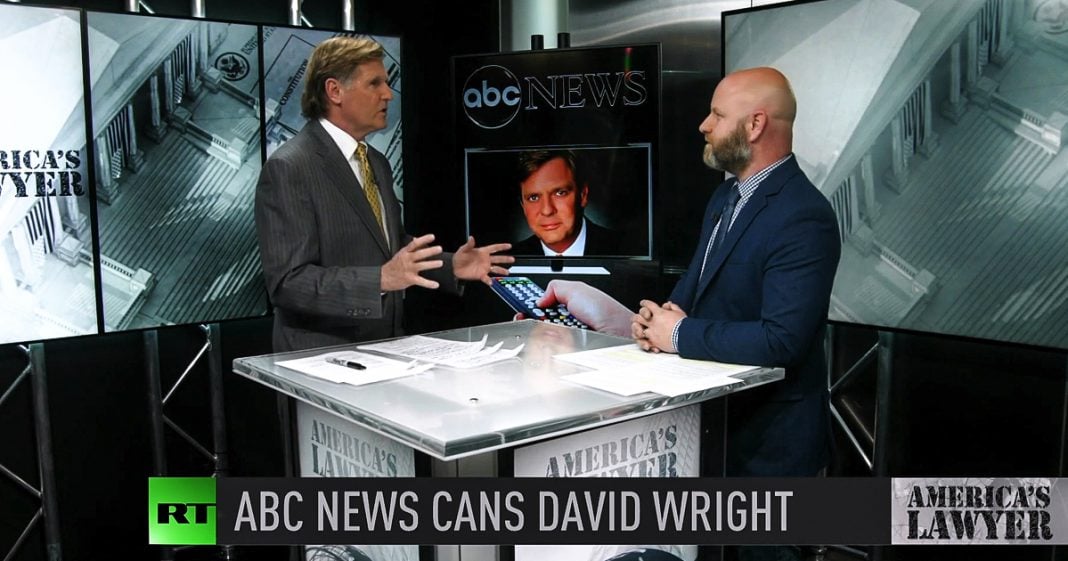 Mike Papantonio:             ABC news reporter David Wright was recently caught on camera by Project Veritas claiming to be a socialist and criticizing ABC’s parent company, Disney. ABC responded by suspending Wright. I have Farron Cousins with me from trial lawyer magazine to talk about this. This is, this is a solid reporter.

Mike Papantonio:             This is one of, this is maybe one of the best reporters they had, but they couldn’t stand the fact that he was telling the truth about how dysfunctional corporate news has become. It doesn’t serve the public. They simply create a narrative they want to create to sell advertising or sell whatever they have to sell politics, whatever it is they want to sell, and they’ve gotten way away from being a news organization.

Farron Cousins:                  Well, you know, I think it’s funny that everybody jumped on David Wright’s comments that, I would describe myself as a socialist, and everybody thought that was the big deal. But no, when you look at what he said, he actually exposed the whole problem with all of the corporate media. He talked about Trump and said, we give him a pass on too many things. We don’t give him credit for the good things he has done. We don’t cover the stories that people want to talk about. We don’t care about voters, and of course the big thing, the big thing that got ABC super mad, he criticized Disney by saying, there’s so much of this, you know, crossover now. The corporate stuff has to be a part of the news. The Disney princesses, the Avengers show up on Good Morning America instead of, of course telling you about dangerous products and things.

Mike Papantonio:             Okay. Here’s, here’s where he, to me, he uses terms that we’ve used in journalism a long time and that is that these are public airways. Okay. ABC only exists because the commons, the public airways, we let them use it. Now here’s the trade. You can, you can use these airways to sell your garbage. Your game shows. Your reality TV. Your second rate series shows or whatever it may be. It’s almost, it’s almost untenable to even go through the channels these days. You can do all that, but the exchange is, you have to report news. That’s the exchange. We’re going to let you use these airways, but you have to report news. Now, they have gotten so far away from that and that’s what this, that’s what Wright was talking about, isn’t it?

Farron Cousins:                  Right, and you could take Wright’s comments about ABC and apply them to any of the other networks. You could do it to MSNBC, to CNN, Fox. Pretty much at this point, everybody has, I think except for CBS, that’s only owned by one corporation instead of a conglomerate. But at the same time, what he’s saying applies to all of them. What he’s saying applies to all the news media and that’s why for the most part in the US the news media itself, the established news media is dying off. We are seeing people abandon these traditional media outlets for the same reasons that Wright is talking about here.

Mike Papantonio:             Okay. So, so here’s, here’s what everybody misses about this story. Okay. First of all, you begin with that analysis, these are public airways. We let them use our airways. I can’t say that enough. We let them use our airways in exchange they give us garbage. They give us game shows that you, you’d have to be you, you know, you have to be an imbecile to watch. Reality shows that maybe entertain somebody that is thinking along an eighth grade level. You have no real shows, you have nothing that is, you go, wow, this is interesting. This is something I really want to watch. But they’re only there to deliver pharmaceutical ads. You see that eight minutes that they’re actually there, is giving you a show, is only there so they can sell pharmaceutical ads. So Merck or Pfizer can pay them $10 million a month to do their advertising. That’s all it’s about nowadays.

Farron Cousins:                  Well, and it’s really interesting. I had this conversation the other day talking about the fact that the news media today, you know, the, the ABC, NBC and CBS, the average, you know, channels you get, the commons. When I was growing up, you would tune in to 60 Minutes, they would tell you about a bad pharmaceutical. They would tell you about, oh, this brand of washing machines is faulty. We did an undercover investigation. They were talking about the chain, oil change places ripping people off. Those stories don’t exist anymore because those are now the advertisers. The advertisers, the pharmaceutical giants, the corporations in general found out along the way we want to end this coverage that makes us look bad. Let’s just start buying ads. Let’s make them beholden to us instead of us accountable to the consumer.

Mike Papantonio:             Yeah. Okay, and to really bring it home, we say this all the time. If you watch MSNBC and you see a Boeing ad or a McDonnell Douglas ad, don’t you ask yourself, am I gonna buy a Patriot missile? Am I going to buy a 757, I mean, what am I going to do here? The ad is simply there to have access to the networks and the networks have lost sight of what real news is. It’s really unfortunate.