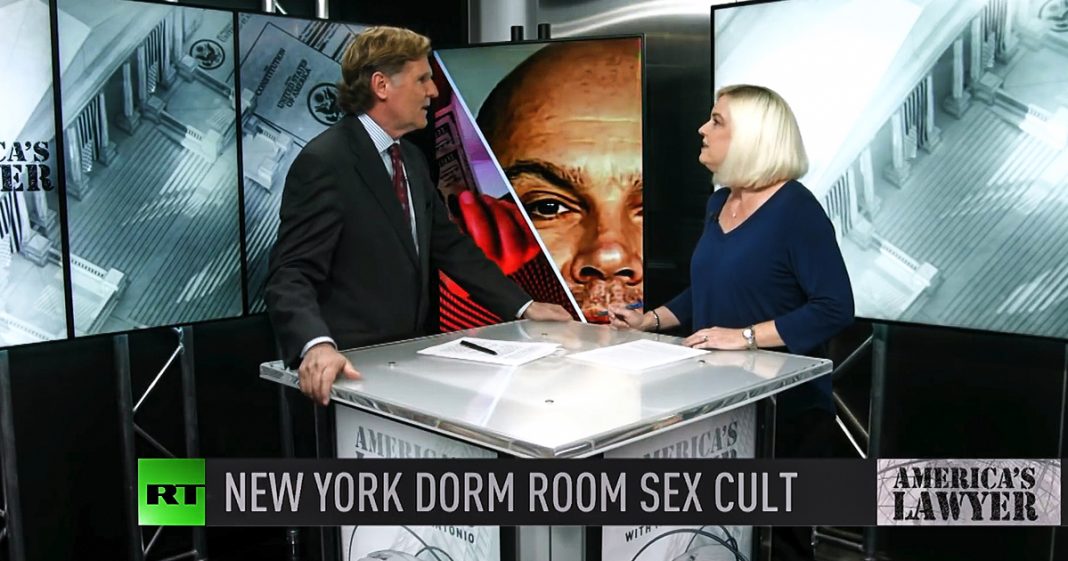 Via America’s Lawyer: RT correspondent Michele Greenstein joins Mike Papantonio to talk about the charges of racketeering and intellectual property theft filed by the DOJ against Chinese telecomm giant Huawei. This is just the latest development in a long saga of disputes between the Chinese 5G developer and the U.S. government. Is this feud truly rooted in security concerns, or is it actually economic? Then, Mike Papantonio is joined by legal journalist Mollye Barrows to discusses a horrific case of sex trafficking and extortion unearthed just outside the Sarah Lawrence College campus in New York. Lawrence Ray exploited his own daughter and her peers to run a ‘sex cult’ out of her dorm room, which Ray himself also lived in.

Mike Papantonio:             The department of justice, once again has Chinese telecom giant Huawei in its iron sites as the company is now being targeted with charges of racketeering and intellectual property theft. This is just the latest of the prolonged saga between the US and the government and, and Huawei, which has drawn controversy to its potential stranglehold on global 5G. RT’s Michele Greenstein is here to now walk us through this. Michele, first of all, you know the first thing that comes to my mind is we know the history of, of Huawei with them stealing technology from the US. We, that story is an old story.

We know about the intellectual property theft. We know that each administration has promoted this vibrant relationship between, well at least the Democrats primarily through Obama and through Clinton, were into globalization and through globalization we were going to share everything we could with China. Now we have this case it, it seemed like we should have seen it coming. Fill us in on new charges against Huawei, if you would, set this story up a little bit.

Michele GreenStein:         Sure. The new indictment against Huawei and some of it’s subsidiaries builds on older allegations that the US brought against Huawei in January of 2019. It’s a 16 count superseding indictment that alleges a conspiracy to violate the RICO act. It also adds a charge of conspiracy to steal trade secrets that, according to the DOJ, involves the company’s “alleged long-running practice of using fraud and deception to misappropriate sophisticated technology from US counterparts.” So again, we’re talking about intellectual property theft. Now prosecutors say that Huawei efforts to seal this IP were successful and that they were able to obtain IP about robotics, cellular antenna technology and internet router source code. Then allegedly the stolen IP allowed the company to cut their research and development costs and delays, giving them what the DOJ calls an unfair competitive advantage.

Mike Papantonio:             Well, yeah, the, the talk on this thing has been from the very beginning, you know what? We can get cheaper labor here. We can cut research and development, we can steal technology. But as I’m, as I’m watching this story and I know you had to be wondering the same thing, doesn’t it sound like we’re doing the bidding of companies like Cisco and Motorola? Aren’t we doing somewhat of the bidding? We’re kind of changing the standards for free market by doing the bidding here for American or Western corporations and really trying to focus on Huawei’s bad conduct, which by the way is very bad. And I’m wondering what, what’s Huawei’s response, how do they respond to these whole, to these charges? Where are we with that?

Michele GreenStein:         Well, the company is saying that the evidence against them is weak and that this new indictment is just part of the justice department’s attempt to damage the company’s reputation. Here’s the, the official company response, “these charges do not reveal anything new. They are based largely on resolved civil disputes from the last 20 years. In these disputes, no court has ever found that Huawei had engaged in malicious IP theft or required Huawei to pay damages for infringement on others’ IP.”

Mike Papantonio:             Well, you know, that’s only part of the story. That’s really only part of the story. That’s a great comment by Huawei, but there’s a lot more to that story. We don’t have time to go into on this one. But the point is, I look at this and I say, you know, don’t we see this coming with CAFTA and NAFTA and, you know, this attempt by the Democrats with TPP and the Republican, you know, the business type Republicans jumping behind TPP. We, as we globalize, as we expand this whole global market, isn’t it kind of ridiculous for the United States to say, ah, they’re ahead of us in technology? They, they can get a better deal on labor. They can get a better deal on research and development.

We can’t keep up with those numbers. It’s either one or the other. You can’t have it both ways. You know, in the past, the US whether it’s the justice department or the state department or Congress has leveled accusations that are against Huawei, and, and it’s been the same kind of talk that they have some big advantage over us. And that really, if you read between the lines, it’s almost like you’re saying, well, free, free market capitalism doesn’t work where it comes to globalization. What’s your take on that, Michele?

Michele GreenStein:         Right. Well, the most common allegation that we’re hearing from us officials is that companies shouldn’t trade with Huawei because Huawei could be used by Beijing to spy for the Chinese state. In fact, Huawei like you alluded to, has actually been designated as a national security threat by the US Congress since 2012 even though no evidence that Huawei spies for the Chinese state has been brought yet. But Huawei says it’s never been asked to install backdoors in their products and it complies with the law in all countries it operates and the company sees this whole campaign as a “well coordinated geopolitical campaign” against them. But what’s really interesting here is that Huawei maintains that it’s an employee owned company, so it’s not beholden to Beijing or any other government as US officials are repeatedly claiming.

In fact, it says it’s because of this, not IP theft, that it’s competing so well because it isn’t beholden to shareholders and don’t have to make decisions based on short term profit or quarterly returns. They say this allows them to make high quality products for cheap prices. So this is why it makes sense for all these countries, 170 of them, in fact, to want to do business with Huawei. As one example, Huawei spent $15 billion on research and development last year in 2019 while it’s primary US-based competitor, Qualcomm, spent under five and a half billion dollars on R and D that same year. So they say it’s simply a matter of where they’re allocating their money.

Mike Papantonio:             A disturbing new case has emerged where the father of a former student at Sarah Lawrence College in New York was found to be running a sex cult right on campus out of his own daughter’s dorm, dormitory. What’s more, he managed to extort her friends and her classmates into pony up heaps of money while subjecting many of them to prostitution. Here to talk us through this case is Mollye Barrows, a journalist for trial lawyer magazine. Mollye this, this is beyond crazy.

Mike Papantonio:             You know what gets me, all of this is taking place on the college campus. The college campus is trying to cover it up, make act like it’s not a big deal. The same reason that they coverup rape cases that take place on campus.

Mollye Barrows:                Yes, that’s what stuck out to me about this story as well. You know, sad as it is, it’s not unusual to have a master manipulator, which is what prosecutors say this Ray, Lawrence is the father of this former student that went to Sarah Lawrence College, but what is crazy to me is that he moved in with his daughter in her dorm with eight other students. There were seven females, one male student, he was there for two months. That’s where he formed this relationship under the guise of a father figure.

Mollye Barrows:                On campus in the middle of campus. Now he lived in campus and made these connections, made the, the foray into these relationships to manipulate them for a couple of months and then he eventually moved off campus. Many of the students followed him. He was living in an apartment with a man he’d met in prison because, mind you, this began in 2010 he moved in straight out of a prison cell into his daughter’s dorm room.

Mollye Barrows:                And parents at the time, we’ll get into some of the details, but basically parents of some of his victims have said that they did come forward to the school at the time he was living on the campus and say, what’s going on? Why is this man living here? And one individual that was representing the school told this couple, these, these parents. Well, we’d had complaints about him, but our hands are tied because he’s visiting his daughter.

Mike Papantonio:             They don’t want to have to report any bad things like prostitution is taking place on our campus.

Mollye Barrows:                Is what a lot of organizations do when they know or are aware of or, you know, someone who is basically committing crimes or alleged to be committing crimes. We saw it with Penn State, with Jerry Sandusky. We saw it with Dr. Strauss over in Ohio State accused of abusing, you know, 177 students on that campus as well and, and the number is still rising. But in this particular case, it started in 2010 he moved onto campus, made these relationships, moved off campus. Basically extorted, prosecutors according to, in the indictment, he was just a reign of terror is how they described him.

Mollye Barrows:                He manipulated these kids. He had them confess their deepest, darkest secrets. He then put it on camera, had them confess to crimes they didn’t commit. Got sexually explicit videos of them and then used it to extort money from them as well as singlehandedly pimped out one young woman and for $500,000. So it’s like a total of $1 million between money from her activities, if you will, and then running and extorting.

Mollye Barrows:                Well, and it gets even more interesting because the only reason he’s even been indicted on these federal sex trafficking, forced labor and extortion charges is because of an article that New York Magazine did exposing his alleged crimes in April of last year and they went to Sarah Lawrence College at the time and said, hey, we’re investigating this story. This is what we’ve come up with. And at the time the school looked into it and basically released a statement to them saying, you know, we did our own investigation internally and we didn’t find any evidence to substantiate those claims, which again is going not our problem.

Mike Papantonio:             And Sarah Lawrence College in New York knows all of that. The parents who have kids there, they don’t know what’s going on.

Mollye Barrows:                And it’s heartbreaking because he cut their ties, their children’s ties. He drove a wedge deliberate.

Mike Papantonio:             And, and rather than leadership at Sarah Lawrence College doing anything, they ignore it.