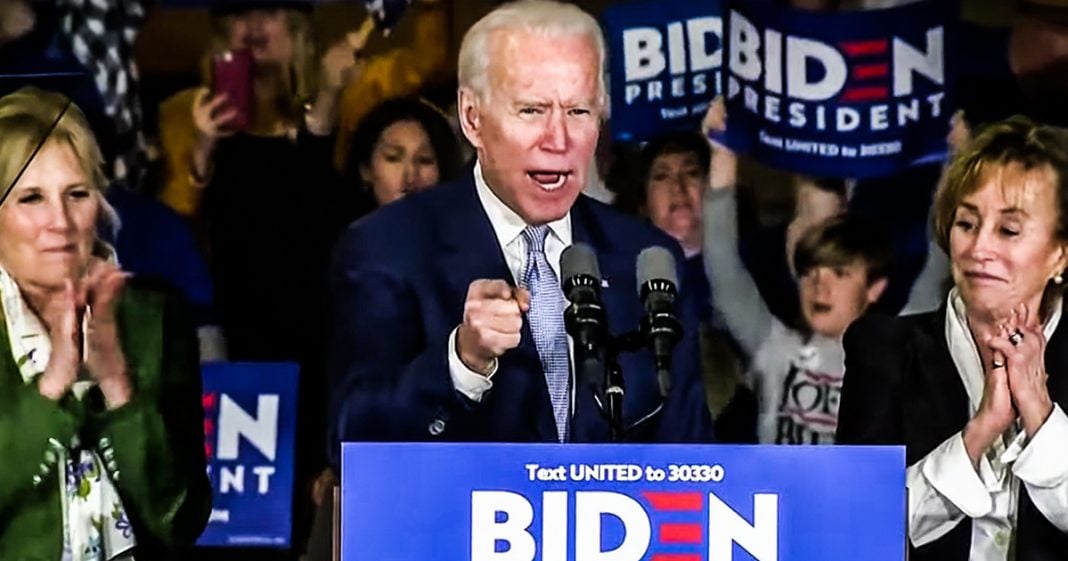 Thanks to a slew of last-minute endorsements, Joe Biden emerged as the victor on Super Tuesday, winning a majority of the contests and the delegates that were up for grabs. He now leads Bernie Sanders by 60 total delegates, meaning that it’s a tight race between the two. The rest of the field needs to clear out, and Ring of Fire’s Farron Cousins explains what will happen next.

Well as most of the results are now in from Super Tuesday, it is clear that Joe Biden is officially the Democratic front runner at this point. He now leads in total delegates. Bernie Sanders is 60 delegates behind him. Biden has 390. Bernie has 330. So obviously Biden was the big winner on Super Tuesday. He took home the prizes of Texas and Massachusetts along with seven other States for a grand total of 9 out of 14 victories. That’s pretty impressive. I mean, I’m going to be honest about that. Bernie Sanders took home the biggest prize, which was the state of California, which helped to keep him within striking distance of Bernie Sanders. And I’ll get more to Ber, Bernie and Biden in just a moment, but I want to talk about the two people who need to leave this race immediately and that is Elizabeth Warren and Michael Bloomberg. The voters made it clear yesterday, and we have now have had more than a third of the States vote. Right?

They don’t want these two. They’re done. They’re tired of it. Elizabeth Warren has no path to the nomination, unless of course she were to pull in roughly 100% of every single remaining race. Now, if she could do that, then heck yeah, Elizabeth Warren should stay in. The problem is she can’t. She came in third in her own state. Now that’s not necessarily unprecedented, although it is exceedingly rare for a sitting member of Congress, Senate House, whatever, to lose their own state in a presidential primary. That’s a bad sign. It’s a sign that you cannot win if you can’t even win the people who have voted for you in the past, you’re done and before anybody goes to the comments and starts yelling at, no, this is not sexism. This is not, oh, I hate Elizabeth Warren. This is reality, and that’s what we’re looking at now, Elizabeth Warren does not have a path forward.

Now, a lot of people for the last couple of days, prior to Super Tuesday had obviously been calling for Elizabeth Warren to drop out. They believe that Elizabeth Warren supporters would automatically go to Bernie Sanders. However, there is no guarantee of that. So even if Elizabeth Warren does drop out now, which she says she’s not going to, that isn’t a guarantee that any of her supporters go over to Bernie Sanders. Now, I have seen plenty online who say that they will, but they’re not going to until she drops out. But again, that’s anecdotal and it means exactly nothing. So we don’t know where those supporters are going to go, especially with Biden surging at this point. They could easily go to him. As for Bloomberg, Bloomberg did pull off a victory yesterday in American Samoa. He won a contest and then proceeded to lose all of the others and it only got viability, which is 15% or higher in just a couple of States that awarded him six additional delegates on top of the six that he got from American Samoa for a grand total of 12 delegates.

Bloomberg has no path to the nomination and he is announced that his campaign is going to reassess things, right? I mean, he was paying people tons of money, thousands of dollars a month in the state of California to go out there and spread the good word of Mike Bloomberg and it didn’t work for him. He has spent over $400 million on this race and when you do the math, that breaks down to $33 million per delegate that Mike Bloomberg has spent of his own money. $33 million for every single delegate. Biggest story of the day. Obviously it was Tulsi Gabbard. Tulsi Gabbard won her first delegate, her one and only delegate from American Samoa, and under the current rules, which the DNC has already said they’re going to go ahead and change those real quick, she would qualify for the next Democratic debate. But again, they said, oh, we’re gonna change it and so she’s probably not going to qualify for the debate.

Gabbard should also leave the race. Now, I don’t think Tulsi Gabbard is necessarily sucking supporters away from any other candidate. I just think at this point it’s kind of sad. I do not hate Tulsi Gabbard by any stretch of the imagination, but she clearly has no path forward at this point. She’s not even out there actively really campaigning. She’s not raising money. Why is she in this? Is the big question. This makes no sense. So you could probably drop out right now. Now Bernie and Biden, right? That’s the story. That’s the actual big story. That’s what’s really happening now. This is a two person race and Biden is in the lead and a lot of Sanders supporters a little dejected this morning and yeah, it was kind of heartbreaking watching some of these results come in. Even though the polls from just a day ago had showed that Bernie Sanders had these places on lockdown, then suddenly the results come in and he doesn’t, not uncommon for results to not completely match up with the polls.

Just makes the disappointment a little bit greater. So what now? Hopefully in the upcoming debates, which there are two of them left, it will be a two person debate. We will see Bernie Sanders. We will see Joe Biden and we will not see anybody else there to distract us and that’s what needs to happen. Joe Biden didn’t campaign or even run any ads in most of the States that he won on Super Tuesday and that’s not a coincidence, folks. When people don’t know about Joe Biden, when they don’t understand how gaffe prone he is, how clueless he is, and the fact of course that he doesn’t really have any plans or policies for this country, then they’re like, oh, well no, I don’t like this guy and I’m not going to vote for him. His strategy was to do nothing and doing nothing actually helped him more than doing something would have.

So props to Joe, you can’t do that anymore. You can’t do that when it’s a two person race and all of the spotlights are shining on you. Furthermore, Joe Biden has a heck of a lot more baggage than Bernie Sanders. If Joe Biden becomes the nominee, we’re going to hear Republicans, and we know this because we’re already hearing Republicans say this, that he should already be impeached for Ukraine. That his son should be in jail for Ukraine. It’s going to be Ukraine, Ukraine, Ukraine for the next four and a half years if he wins the election. From now until the end of that first term, if he gets it, it’s got to be nothing but Ukraine. There will be investigation after investigation. Republicans will campaign on the fact that Joe Biden is corrupt, his son is corrupt. It’s a whole corrupt family tree, and they’re going to ignore the fact that yes, all of that also applies to Donald Trump, but they don’t care about it over there.

They care about it over here, and voters will see that. Voters will jump on that, and Joe Biden will have no path to the White House. That is extreme baggage, and that is only one of the things in Joe Biden’s bag, and believe it or not, folks, that’s actually an imaginary thing. But it’s not for the voters and it certainly isn’t for the Republicans who are going to start preparing those attack ads against Biden any day now. So this is a little awkward, folks. A quick update to add to this video. Actually, after I had recorded that one, it was just announced Bloomberg has dropped out, endorsed Joe Biden, so that happened. We’ll see if it affects the race. Just wanted to give you the quick update to this segment.