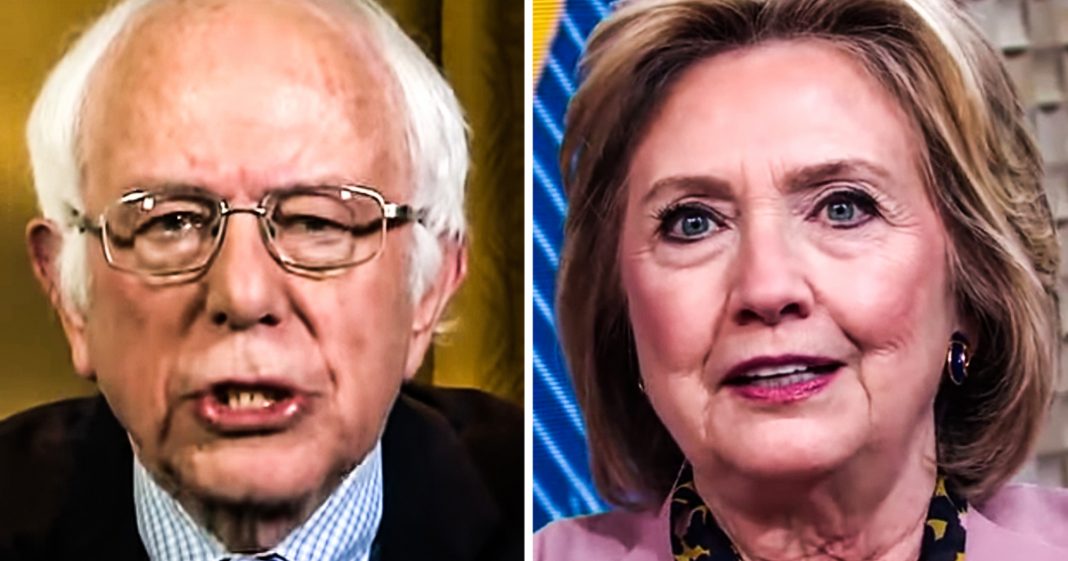 In an ABC News interview that aired on Tuesday, Hillary Clinton couldn’t help but take a few cheap shots at Bernie Sanders, claiming that he wouldn’t be a strong nominee for the Democrats. The polls say otherwise, and his ideas are hugely popular among Democrats, Independents, and even some Republicans. Clinton is completely out of touch with the public, and has been since the 1990’s, so maybe that’s why she doesn’t understand his appeal. Ring of Fire’s Farron Cousins discusses this.

Yesterday morning, ABC news ran an interview that they had with Hillary Clinton, you know, just in time for Super Tuesday voting, where Hillary Clinton came out and said that she does not think Bernie Sanders would be a very strong nominee against Donald Trump. The day of Super Tuesday voting where nearly one third of the total delegates were up for grabs needed for the nomination and ABC news decides, you know what, we should run that Hillary Clinton interview where she says, Bernie Sanders isn’t very good. Smart move. Really not suspicious at all, ABC news. Good, good decision there. Here’s the thing though. Hillary Clinton continues to re-emerge every week or two with just another dig at Bernie Sanders and at this point it’s getting ridiculous and almost comical. Hillary Clinton lost to the least popular candidate in modern American history and she has the audacity to come out here and try to tell us what does and doesn’t work for a nominee when she refuses to acknowledge what didn’t work for her. Nobody should be listening to Hillary Clinton at this point.

She’s not some great Oracle out there. She didn’t learn from her mistakes and is going out there and trying to warn us not to make them. She’s still just pissed off at Bernie and she is going to ride that wave of being pissed off as long as she possibly can and it’s exhausting at this point. But you know what’s not exhausting? The fact that Bernie isn’t coming back and hitting her back. His campaign is not giving any comments here. They’re not taking digs at her in response to all the other comments she made, like nobody likes Bernie, nobody wants to work with him. They’re playing this civilly, just like the attacks from Elizabeth Warren on Bernie Sanders. Bernie’s come out and hit some of the other candidates pretty dang hard, but he refuses to do that with Elizabeth Warren. Even when she’s telling us lies about his policies, like he wants to raise taxes on middle-class people. We can’t do that. And Bernie’s not coming back and, and being vicious and attacking her either.

Show all of these tropes about Bernie’s in this for his ego. Bernie attacks people. Bernie has no friends. I think it’s directed at the wrong folks. Bernie has been very civil, even when he has gone on the attack on some of the other candidates after it just becomes too much and he has sat there and taken quite a beating from people like Hillary Clinton and Elizabeth Warren without firing back at all. And the most fiery we ever saw him was after the debate when Elizabeth Warren walked up to him and said, I believe you accused me of lying on live TV and he said, well, you accused me of lying. That was it. That was the extent of it from him. I don’t know folks. All of the lies and all of the slander coming against Bernie Sanders have proven to be exactly that. This is not a man that’s sitting there grousing and grumbling and fighting every single Democrat he comes across. He has been humble. He has been civil. He has taken their abuse and he is not fired back in many of the instances, especially this one with Clinton where he easily could have hit back because Clinton said he would not be the best nominee against Trump, except for the polls show that he is the best nominee against Trump.

He is the only one who is consistently polled ahead of beating Donald Trump in head to head match ups in every single poll. Did a segment on that one yesterday too, mentioned four different polls. The only consistency among them is that Bernie Sanders always beat Donald Trump. None of the other candidates did it in every single poll, Bernie did. They didn’t. I would say that makes him the best. His policies poll better than anyone else’s. I would say that makes him the best nominee. His campaign could have hit back against Hillary Clinton with any one of those claims and they didn’t, and Hillary Clinton’s going to keep reemerging from wherever it is she’s hiding out every couple of weeks to take another cheap shot at Bernie Sanders. And you know what? I hope she does because in the past, every time she’s done that, he’s gotten a bit of a bump and considering how Super Tuesday played out, he could use a bit of a bump right now. So Hillary, keep the shots coming because you’re only making Bernie look better.