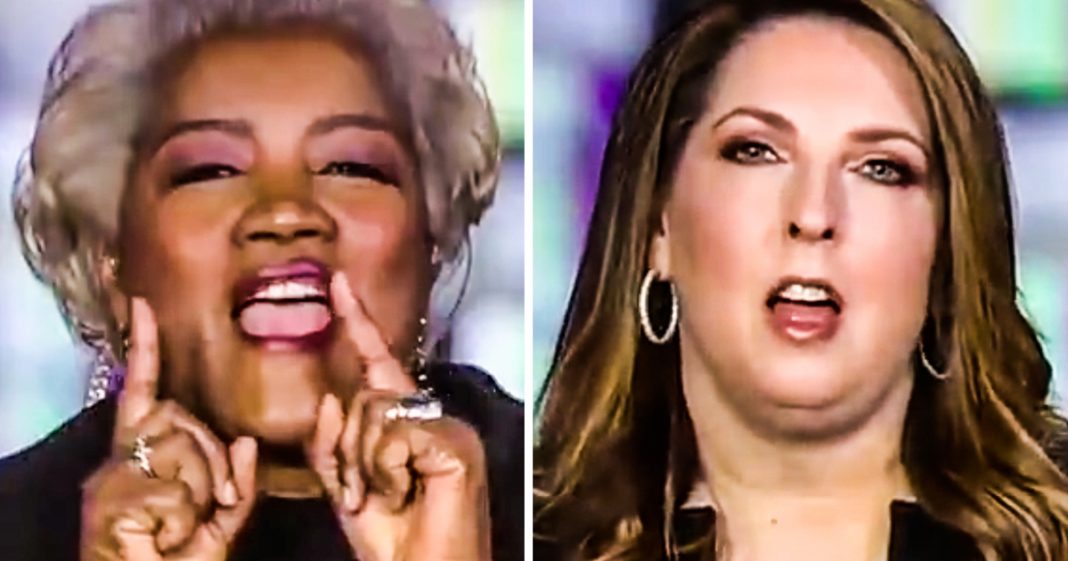 Former interim DNC Chair Donna Brazile isn’t happy that Republicans are interfering and criticizing the Democratic Primary process, and she had some harsh, but necessary, words for RNC Chair Ronna McDaniel: Go To Hell! Brazile said this live on Fox News, leaving the hosts stunned that she would call out the RNC chair like that. Ring of Fire’s Farron Cousins explains why Brazile was right to say this, but wrong with her reasoning.

Sandra Smith:                      We had Donna, Ronna McDaniel on, Donna, earlier on the program the chairman of the RNC, and she was talking about the possibility of a brokered convention, the impact that would have on Bernie Sanders. Here’s Ronna.

Ronna McDaniel:                    It does depend on how big the lead that Sanders takes out of California is if he picks up a huge proportion of delegates. But I don’t see anybody getting out soon, and it’s leading towards potentially a brokered convention, which will be rigged against Bernie if those superdelegates have their way on that second vote.

That’s the kind of fire that we have needed in the Democratic party for far too long and it’s been missing. What Donna Brazile just brought to Fox news was awesome until she kept going. Because if all she had said was don’t interfere in our primaries, go to hell and stopped right there, would have been great. Would have been perfect. I loved that. And then you kept going and you kind of proved her point. Ronna McDaniel is not wrong to say that the Democratic primary process is screwed up because it is, folks. And then Donna Brazile says they’ve got winner take all elections.

Okay. What does that even, what does that even have to do with any of this? That’s actually a better thing. I prefer that. In fact, I’ll tell you what I would prefer more than anything, is to not even have delegates to just have popular vote. Every state should go and vote on this same day and whoever wins the overall popular vote, you’re the nominee. No delegates, no superdelegates, none of the shenanigans, none of this, oh, well you vote this month. You vote six months later, after half the people have dropped out and it’s down to one or two at this point, that’s not fair.

So yeah, the Republicans need to butt the hell out of our primary process, but at the same time, the leadership in the Democratic party needs to understand our primary process sucks. The Republican primary process sucks. They all are awful. The whole thing is stupid the way we do this. I’m sure it did make sense a hundred years ago, back when Iowa had to go first because of the farming seasons and whatnot. We don’t live in that world anymore. There is no reason whatsoever why every single state shouldn’t vote on the same day and then boom, the primaries are over. That’s it. Done. And it should be whoever gets the popular vote. Delegates shouldn’t be a thing. Superdelegates sure as hell shouldn’t be a thing, but here we are. So yeah, Ronna McDaniel was correct in her criticism, but Donna Brazile was also correct to tell her to butt the heck out of it.

The Republican party has their own problems to deal with and Ronna McDaniel would rather not focus on those and focus on those in the Democratic party. But Donna Brazile shouldn’t be doing the same thing over there. Shouldn’t be saying, well, you’ve got it. No, they need to butt out because they don’t have a say in our process and they don’t have a say in who our nominee is going to be and that go to hell needs to extend to other people too. People like the never Trump conservatives like Max Boot, Hugh Hewitt, Bill Kristol. I mean, the people who helped push us into Iraq are now trying to stump for Joe Biden because they don’t like Bernie Sanders and they don’t like Donald Trump. No, they need to butt out of this. Republicans don’t have a say in the Democratic process. Just as Democrats don’t have a say in the Republican process. But that’s not to say that both processes aren’t completely stupid and backwards and alienating for the majority of people in their parties.