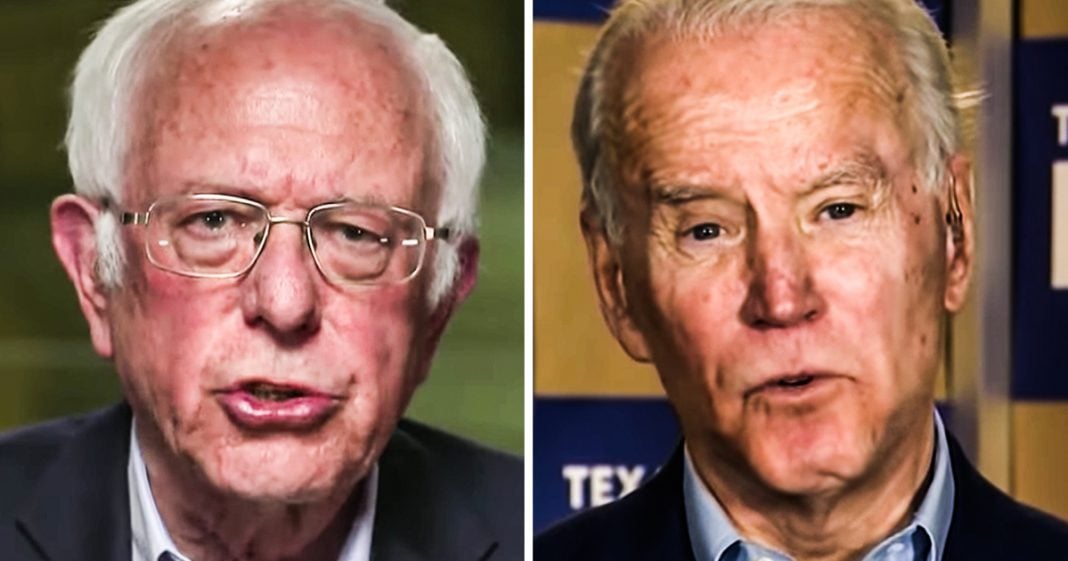 Donald Trump is trying to sow further discord within the Democratic Party as Joe Biden racks up more endorsements from moderate candidates. Trump tweeted on Monday evening that the DNC is trying to stage a coup against Bernie, and this isn’t the first time he’s suggested this. There is a reason behind this tweets, and it isn’t because he’s concerned about the Democratic Party. Ring of Fire’s Farron Cousins discusses this.

Last night as Joe Biden was pulling in endorsements from every moderate who ran for president this past go round, Donald Trump got on Twitter and sent out just a simple sentence and that simple sentence from Donald Trump was, they are staging a coup against Bernie. That’s it. Nothing in all caps, nothing added to it. Just they are staging a coup against Bernie. Now, why would Donald Trump tweet this out? Well, for one, he’s been tweeting out little things like this for quite some time now. He has hinted repeatedly at the fact that the DNC is trying to screw Bernie over. This is nothing new coming from the president. The question is why? Why would he, why would he say this? Is he actually concerned about the future of the Democratic party? Is he really caring that, oh, poor Bernie is kind of getting screwed out of things here and that it’s very clearly coordinated that all of these people are coming out and endorsing Biden the day before Super Tuesday? No, what Donald Trump here is trying to do is sow chaos.

Create more mistrust within the Democratic party already, you know, as if it’s not already there. That’s what he’s trying to do here. This is not because he’s concerned that there could be manipulative things happening behind the scenes, like we have heard in the last 36 hours. Barack Obama has been making phone calls asking people to come out and endorse Joe Biden, allegedly, do not have any proof of that. But those are the stories floating around and Trump wanted to seize on that because he knows that Bernie Sanders has a lot of hardcore fans, the so-called Bernie bros, the labels that they put on us. They know that we are passionate in our support for Bernie Sanders, but more so in his policies. This isn’t a cult of personality, if anything, it’s a cult of policy because we like the things that he wants to do more than we liked the things the other candidates say that we want to do. That’s just how it is.

But Trump thinks that he can convince us or any Bernie supporters out there that he’s some kind of viable alternative. That Donald Trump is, as the corporate media likes to say, so much like Bernie Sanders, but he’s not, and this isn’t fooling anybody. I shutter to think that any people voting for Bernie Sanders in this primary would turn around and vote for Donald Trump in the general election if Bernie doesn’t get it. Because if you’re serious about supporting Bernie Sanders and the policies that he is talking about every day, then you have nothing in common with Donald Trump and no reason to go vote for him. Or maybe he’s trying to get us to stay home if Bernie Sanders doesn’t become the nominee. Now, that is a very real problem that the Democratic party is going to have to face because with regards to that, there’s nothing we can do about it, right? We can go out there, we can talk to people, explain the importance of voting, but at the end of the day, this is going to be another situation where the DNC intentionally screwed Bernie Sanders out of the nomination by coming out with all of these endorsements for Joe Biden prior to Super Tuesday.

There’s not going to be any way to really overcome that. In a sense, Donald Trump is right in his tweet. They are staging a coup against Bernie, but they’re doing it at their own peril. I don’t think this is going to result in voters switching over to Donald Trump. We’re not going to have a bunch of HA Goodmans out there who suddenly go MAGA hat crazy. But I do think if the DNC screws Bernie Sanders out of this nomination with some kind of behind the scenes coordinated attack, yeah, they’re going to lose to Donald Trump because they’re going to put up a milk toast candidate that cannot pull in all the votes and they’re going to crater the party to the point that it may as well not exist anymore. But they seem to be perfectly happy with that if it means stopping Bernie Sanders.