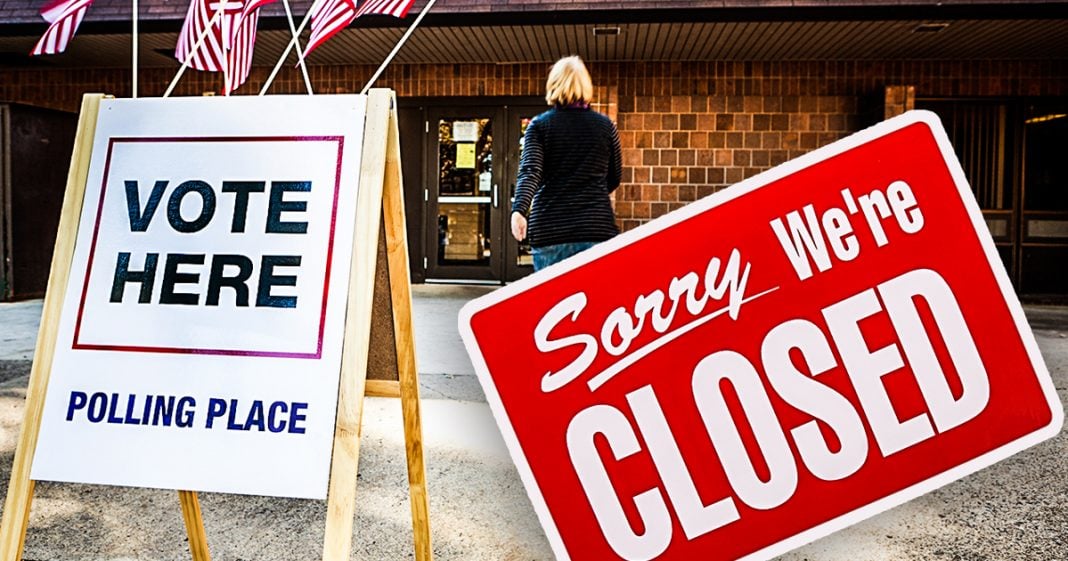 Republican-controlled states are launching all sorts of voter suppression efforts this year, presumably because they know that they can’t actually win an election without cheating. In Texas, even as the population of rural counties grows by the thousands, they are shutting down polling locations, making it nearly impossible for people to make it to vote. Ring of Fire’s Farron Cousins explains what’s happening and why.

Voter suppression tactics in Republican controlled States around the country are ramping up as we inch closer and closer to the 2020 general election. In the County of McLennan, Texas, the population there since the year 2012 has grown by 15,000 people. Most of whom in this population growth have been African American or Hispanic, and so how did the state respond recently? Oh wow, we’ve got 15,000 new voters of color here. What should we do? We’ve got an election coming up and then the state said, aha, I’ve got it. Let’s close 44% of the polling stations in McLennan in Texas and that is exactly what they did. So even though there’s more people, there’s more voters, there’s more need for more polling places, they actually decided to go the opposite route and shut polling places down. McLennan County, Texas is not the only place in Texas where this is happening. This is happening all over the state in counties and cities where they have seen an influx in minority populations, in Democratic voter registrations or just general population booms.

They are closing down polling places to the point where the Guardian points out, this is actually against the law in Texas. They’re closing down so many, such a high percentage over 60% in some areas, that that is literally a violation of Texas law, but they’re doing it anyway. They’re knowingly breaking the law because they know that the only way to challenge that is to take it to court and that can take months or years. By which point we may be looking at the 2022 midterms before these polling places get reopened. They’re breaking the law so that they can tie it up in the court system for a year or more and not have to comply with it. That’s the point of this. The cruelty is the point. The court challenges are the point because they know in the great state of Texas, you’re very unlikely to come across a judge that issues an injunction and says that you have to keep these polling places opened until this is resolved by the courts because if they do not get that injunction and say that they have to keep the polling places open, then they’ve already won.

Because the polling places immediately close and then we just sit back and wait for the courts to deal with this over the years and they know that and that’s why they’re doing it. They also know that the population growth in Texas is hugely Democratic, that these people could very easily, if they all show up to vote, swing the state from red to a more purple color. We’ll find out actually today on Super Tuesday seeing how Bernie Sanders performs in the state, how blue it actually could eventually turn, but Texas is not alone. We see happening in Georgia. We see this happening in Florida and Wisconsin and Ohio, all kinds of States doing all kinds of shenanigans, most of them illegal, trying to prevent people from voting. And the reasoning is very simple. The public doesn’t like the Republican party. The public doesn’t like that the Republicans have nothing to offer them and so Republicans know that as we move forward in new elections, they can’t win if they don’t cheat.