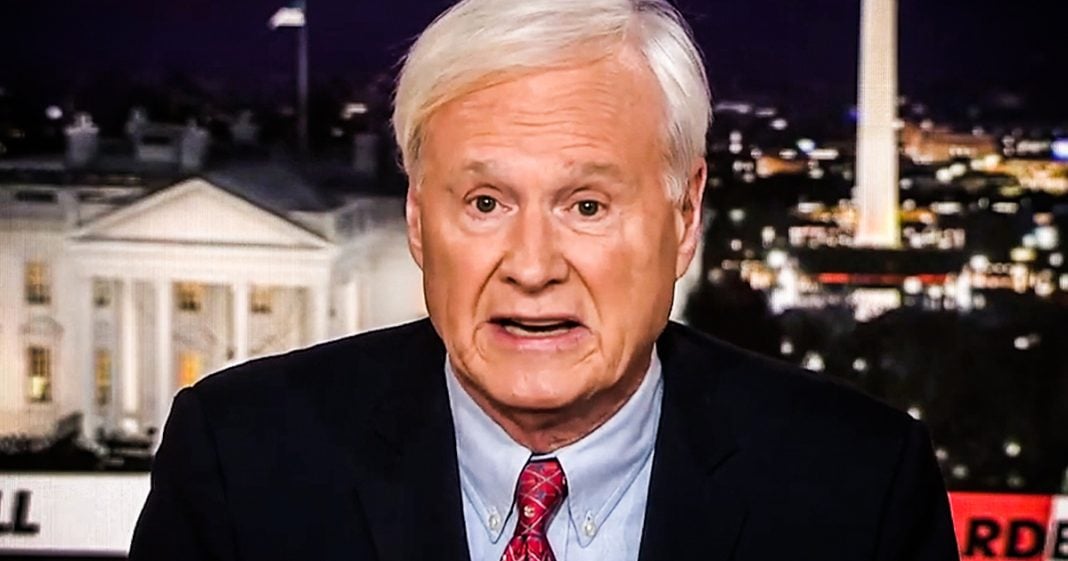 Chris Matthews announced on his MSNBC program Hardball last night that that would be his last night at MSNBC. He says that he “spoke to management” at the network and he decided that he should retire. This comes after a string of controversies for the host, and his announcement didn’t sound like one that he wanted to make. Ring of Fire’s Farron Cousins discusses this.

So last night, Chris Matthews ended his show Hardball, after more than 20 years on MSNBC. He opened up the program, announced he was retiring, issued a half hearted apology for a couple of vague things that we’ll discuss in a moment, and then he left. That was it. No more, Chris Matthews. It immediately went to commercial then to Steve Kornacki who clearly didn’t know that this was going to happen, said that he was shocked and then through to another commercial before coming back and finishing the show. But here’s the thing, Chris Matthews, his announcement, it didn’t sound like the announcement of somebody who finally made the decision, you know what? I think I’m done here. No, his announcement gave the impression that somebody else told him he was done. Here’s what Matthews said.

Chris Matthews:                Let me start with my headline tonight. I’m retiring. This is the last Hardball on MSNBC, and obviously this isn’t for lack of interest in politics. As you can tell, I’ve loved every minute of my 20 years as host of Hardball. Every morning I read the papers and I’m gung ho to get to work. Not many people have had this privilege. I love working with my producers and the discussions we have over how to report the news and I love having this connects with you, the good people who watch. I’ve learned who you are, bumping into you on the sidewalk or at waiting in an airport and saying hello, you’re like me. I hear it from your kids and grandchildren who say, my dad loves you or my grandmother loves you, or my husband watched it until the end. Well, after conversation with MSNBC, I decided tonight will be my last Hardball. So let me tell you why. The younger generation is out there ready to take the reins. We see them in politics, in the media and fighting for their causes. They are improving the workplace. We’re talking here about better standards than we grew up with, fair standards. A lot of it has to do with how we talk to each other. Compliments on a woman’s appearance that some men, including me, might’ve once incorrectly thought were okay, were never okay. Not then and certainly not today and for making such comments in the past, I’m sorry.

The apology thing is weird. Not only does he not actually address the things he has been accused of, which was by a GQ columnist, Laura Bassett, who said that he made wildly inappropriate comments to her back in 2016. But if you’re just announcing a retirement, there’s really no need to apologize for anything. I mean, we’ve seen people retire before on the air. We have also seen people get furious and quit on the air. This was kind of a combination of both of those because he didn’t quit. He was told to quit. Chris Matthews was very obviously, after his alleged discussion with management said, listen, we’re going to give you the out. We’re going to allow you to leave this network with your dignity intact so that we don’t have to fire you because of all of the things you’ve said recently and all of the things you did in the past.

This is becoming too much of a liability for us. You’ve got to go, but we’re going to be nice enough to you to allow you to say that you’re the one who made this decision. And all throughout Matthews’ announcement there, it’s peppered in that this was not his decision, that he was not the one who made this. So let’s talk about this. As I mentioned, the comments from Bassett, said that after a 2016 interview that she did on Hardball, Chris Matthews came up and said some disgusting things, said, why haven’t I fallen in love with you yet? And that was one of the tame ones, she says. The rest of them were gross and inappropriate and were not published in this CNN article talking about Matthews’ resignation. Now we also have the comments he has made recently about Bernie Sanders, the only Jewish person running for president right now, comparing his supporters and his campaign to the rise of the Nazi’s, calling them Brown shirts.

And again, this is to a candidate who lost relatives in the Holocaust. So yeah, I think it’s about time for Chris Matthews to go. When you add all this together, it’s shocking that management kept him around as long as they did. Yeah, he was a staple on the network, probably one of the longest running hosts that they had, but he clearly had lost his touch. He was clearly kind of just getting to the grumpy old man part of life where he hated everything, didn’t care what he said or how anybody took it, and that’s irresponsible and often dangerous. And MSNBC finally recognized that and decided, you know what? Maybe it’s time we get rid of this guy. Maybe it’s time that we move forward. Now, as I mentioned, Kornacki took over last nights show. However, they have not announced a permanent replacement for Chris Matthews on the network. A lot of people are saying that it could be Kornacki filling in that slot.

Who knows, and to be perfectly honest with you, who cares, right? We have to call MSNBC what it is. It is a corporate media network. They do what the corporations who own the company want them to do. That is what they cover. They are very clearly anti progressive. They have been bringing on anti Bernie Sanders people for months now and only recently decided, you know what, maybe we should bring on a couple of pro Bernie people since he seems to be doing so well. But overall I couldn’t care less about who they replace Chris Matthews with, with, what the show is going to be called or anything like that. Personally, I don’t care because I don’t watch MSNBC because I’m not that big of a fan of corporate controlled media.