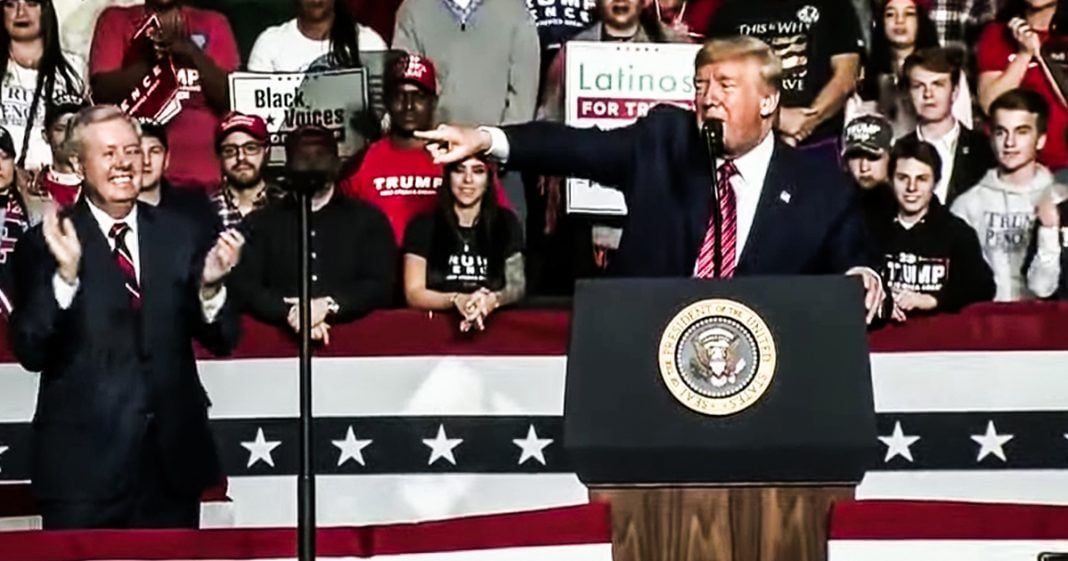 Donald Trump’s MAGA fan club on Twitter couldn’t be happier that people in Blue States are contracting the coronavirus, apparently not understanding how a pandemic works. They posted all weekend long on social media, blaming Democrat-controlled states for the outbreak. Ring of Fire’s Farron Cousins explains what’s happening.

Over the weekend, Donald Trump’s supporters on Twitter seem to be giddy over the fact that most of the Coronavirus cases here in the United States were limited to blue States and these MAGA supporters decided that it was because of the policies of blue States and that’s why only Democrats for some reason were contracting the Coronavirus. Now these folks claimed on Twitter that this was only happening in blue States, by the way, not just a majority, not just some of them, all of the cases they claim were coming from blue States, which is patently false. We have had cases in red States of Arizona, Texas, Wyoming, along with blue States like Rhode Island, California, and Washington. Just this morning it was reported that there is now a case in Tampa, Florida, which is a red state, so if you’re keeping track at home, that would actually mean more red States than blue States at this point.

Although none of that matters because that’s not why any of this is happening. This isn’t a red state thing. It’s not a blue state thing. It’s not a Democrat thing. It’s not a Republican thing. This is a virus that is spread. It is highly contagious. If somebody has it, it’s very likely they’re going to infect somebody else. Has nothing to do with whether or not their governor is a Republican or a Democrat, but don’t tell that to the MAGA folks on Twitter. Raw Story did a great job of compiling some of these tweets, so I’m just going to read a selection of these folks, literally celebrating the fact that blue state people were dying from this virus. We’re now up to two deaths total. First one, why is the Coronavirus only in Democrat ran States so far? Coincidence. Have you noticed all new cases of Coronavirus are in Democrat States, Washington, Oregon, California, or Rhode Island? Do you think the Dems are dumb enough to get sick to make Trump look bad? Just saying.

I said it the first day we heard the Coronavirus is here. The Coronavirus will start spreading and sanctuary States. The Democrats will put Americans in jeopardy to make POTUS Trump look bad. All that matters is the 2020 election. Coincidence? They all seem to end with coincidence. Notice how the virus is located in Democrat States. Are the Dems purposely contaminating these people? It’s a fair question. Yes, and I’m sure George Soros is funding it too, right? Because that’s how all Republicans conspiracy theories go. It’s always George Soros is somehow behind this. He is paying people apparently to get sick. Go out there, cough on as many Republicans as you can and that’s how the Coronavirus is spreading. No folks, let’s put the conspiracy theories aside and let’s sure as hell put any celebration aside.

We should not be happy about the fact that we do now have American citizens who have died from this. We should also not be happy that we have some of the biggest morons in the federal government running the Coronavirus task force. And their only concern seems to be what is this going to do to the stock market? No, people are dying now. This is something we have to take very seriously. This is something that demands immediate action and this administration is not doing it. You know, that is the only politics you can claim in this is that this administration is not doing enough. They have lied to us. Trump has downplayed it. He has called it a hoax, it is not. I’ll admit in the early days of this I was a bit skeptical. I knew it was real. I knew people were dying. I wasn’t downplaying that, but was this going to be as bad as the media was hyping it? And unfortunately the, at this point folks, it seems like it might actually be.

You know this thing is here now in the United States. It is going to spread because that is what viruses do, especially considering we do not have a vaccine. We do not have a full blown cure for this. So it will spread. What we can do at this point is we can take precautions. We can listen to the CDC if they give us any decent advice. But until then, listen to doctors, pay attention to them, do what they are telling you to do because God knows this administration and these MAGA freaks on Twitter aren’t going to tell you how to protect yourself and instead they’re going to come up with crazy conspiracy theories as to why this is somehow just a Democrat disease, even though the data tells us otherwise.