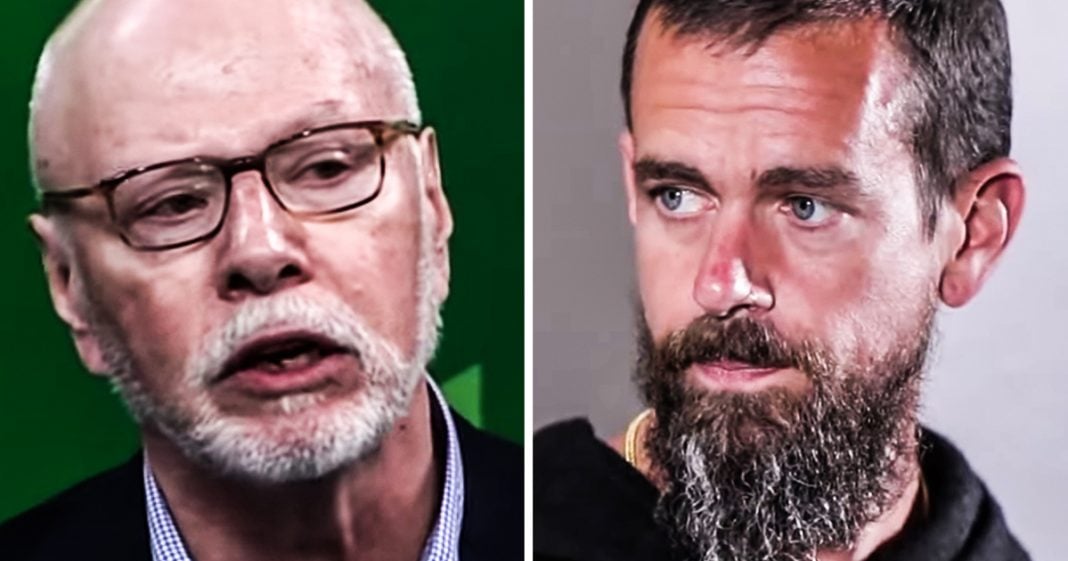 Billionaire and Republican mega-donor Paul Singer has bought a sizable share of Twitter through his hedge fund, and now he wants to make significant changes to the social media platform that could spell doom for anyone who doesn’t share Singer’s ideology. And even if you aren’t political, you could soon be inundated with conservative propaganda if Mr. Singer gets his way. Ring of Fire’s Farron Cousins discusses this.

Last week, a group called Elliott Management bought a huge share of Twitter. Elliott Management, hedge fund, came in, spent a lot of money investing into Twitter so that they could gain almost a controlling share of the shares of Twitter. And part of the reason they did this is because they want to oust the CEO of Twitter, Jack Dorsey. So, who is Elliot Management hedge fund? Well that’s the hedge fund owned by billionaire Republican donor, Paul Singer and Mr. Singer and his group want to get rid of Jack Dorsey who only owns 2% of his own company now. So it’s kind of troubling, right? It looks like Dorsey might not be able to retain his power at Twitter. So I guess the big question is why would Paul Singer, who’s already a billionaire, why would he want to buy this company Twitter, who stocks have always been a little iffy?

It’s never been a sure thing. It’s never been a huge money maker. It’s never lost a ton of money. So why does Paul Singer want this? Because he wants the power that comes along with owning Twitter. Elliot Management has already put forward four names of people that they want to put on the boards of director for Twitter. So they’ve already come forward. It’s been a week and they’ve already come forward and said, you’re going to hire this person, this person, this person and this person, and we also want to put a new CEO in which might actually just be Paul Singer. Now for those of you not familiar with Paul Singer, Paul Singer is a huge Republican donor. He spent $1 million to make sure Trump was not the Republican nominee, but once he was, he came around to became a huge Donald Trump supporter. He has visited the White House and Trump has now bragged about the fact that he didn’t like me at first, but now he’s 100% on my side.

So this guy is known to go in, buy businesses and then he tailors them to what he wants them to be. It’s a form of activism, those who have watched Elliot Management say. It’s not because he believes in the company or because he thinks we can make a lot of money from it. It’s because he wants to turn a company into his own vision, most of the time politically. So what’s going to happen if Twitter is now suddenly owned and run by a Republican billionaire? Well, I’ll tell you exactly what’s going to happen. What’s going to happen to that platform is exactly what Republicans are pretending is already happening on that platform, except it’s going to be happened to liberals and progressives. We will find our voices shut out. We will see all of these new measures that Twitter is trying to implement to identify lies and fake news, disappear.

Because as the creators, not creator, excuse me, as the shareholders of Facebook have pointed out, if we get rid of fake news and misinformation online, that’s going to hurt the Republicans. But that’s exactly what Twitter is trying to do. Last week they announced that they were going to start highlighting things in red or orange so that people would know that this is a statement that cannot be verified. In other words, that this is a lie. And then immediately after that announcement is when Singer came in with Elliott Management to buy up most of Twitter. That’s not a coincidence that’s the reason. Singer wants to transform Twitter into a Republican platform, shutting out the voices from the left, and if that happens, I can promise you there’s not going to be enough people left on Twitter to make it profitable and Mr. Singer will likely lose a couple billion dollars. And if that’s the price, you know what? Maybe that’s okay. Maybe it’s okay then, if Singer destroys this platform, if it means that he gets to lose a couple billion dollars, because at that point, those of us on the left are going to be having the last laugh.