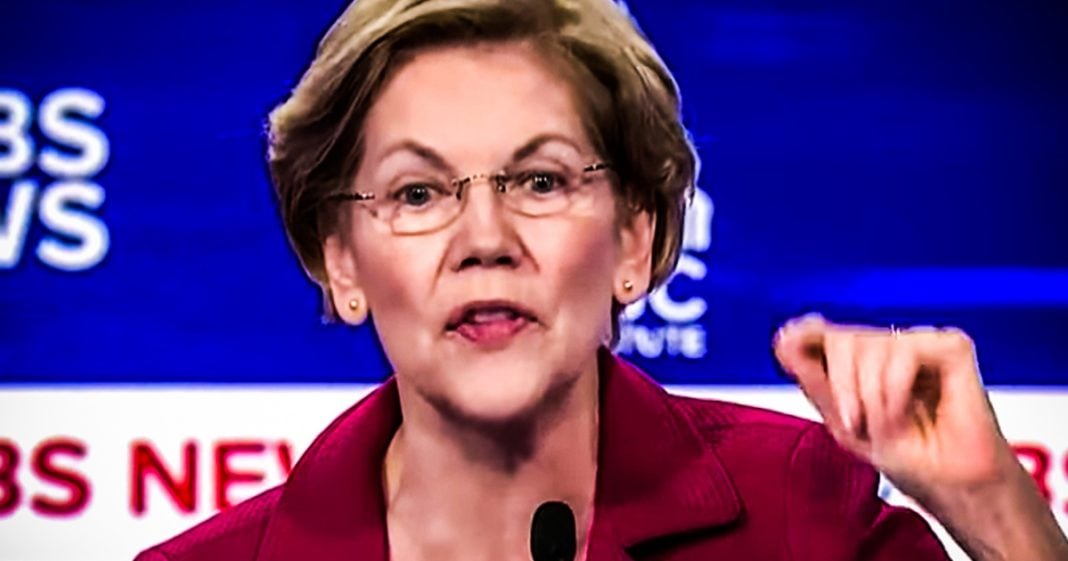 Elizabeth Warren’s poor performance so far in the primaries has been quite a shock considering how well-known and well-liked she is. But her poor performance should have driven her out of the race by this point, and the only reason she’s staying in the game is because she thinks she can win at a brokered convention. Warren is still a good progressive, but this plan is absolutely horrendous, as Ring of Fire’s Farron Cousins explains.

Well, Tom Steyer dropped out of the race on Saturday. Pete Buttigieg dropped out to the race on Sunday. But Elizabeth Warren is still in this thing, and according to her team, she is going to ride this all the way to the convention, even if she doesn’t win a single state. So what’s the plan here? I mean, at least Buttigieg, he didn’t win the popular vote in Iowa, but he did win in the total number of delegates by one or two. So he technically won Iowa. Tom Steyer came in third in South Carolina. Elizabeth Warren came in fifth in South Carolina, yet Steyer’s out. Buttigieg is out. But Warren says, no, I’m sticking in this. I’m going to keep riding this till the bitter end even if I don’t win any States. I mean, do y’all understand, tomorrow is Super Tuesday, 14 States are voting tomorrow and Elizabeth Warren is likely to lose every single one of them, including her home state of Massachusetts. And that means after tomorrow we will have had 18 contests, Warren will not have won a single one of them.

So why is she still in it? Why does she want to take this to the convention? Because she is hoping, she is betting on a brokered convention in which the pledge delegates and the superdelegates in round two of voting when nobody’s pledged anymore, will somehow decide that even though she lost every race, she is still the best candidate. And I’m sorry but if that happens the Democratic party is done, absolutely done. Think about it this way. If we go to that convention and no delicate has enough delegates to win the first round, you know, the first vote and then we go to the superdelegates with the next one. But at the same time all of the other pledge delegates become unpledged. They can all literally vote for anyone they want just like the superdelegates. So suddenly round two of voting, if we get there, is basically nothing but superdelegates. Everybody can vote for whoever they want. And do you understand the kinds of ads the Republicans are going to run if we come to that? Saying that the Dems can’t even run their own party. They couldn’t run their own primaries. Look at what happened in Iowa, because they’re still talking about that.

We’re going to look like a bunch of incompetent buffoons and that is essentially what we will be at that point. Elizabeth Warren is banking on that. She thinks that is her path to the nomination and I can tell you right now if it comes to that, if it comes to a brokered convention, it doesn’t matter who the nominee is because we’re done. We’re done. If you give the Republicans the opportunity to look at the Democratic party and show how disorganized and dysfunctional they are, we’re done. It won’t matter who we put at the top of that ticket. The country will have seen that we can’t even get our stuff in order to pick a nominee correctly. That is going to be horrible optics. That is going to be something Republicans talk about every single day and that’s what Elizabeth Warren is hoping for. She thinks she can stay in this race just long enough. Maybe hit that 15% viability threshold in several States, siphon off some voters from Bernie Sanders, siphon off some from Biden maybe. Who knows?

But her plan at this point, is not going to work. It’s not going to play out the way that her team thinks it is. She does not have a viable path forward at this point and yeah, I know we’re only four races in, right, but we’ve seen the polls of the other States. Elizabeth Warren’s campaign is finished and I am not saying this as one of those people who was tweeting out snake emojis. I never did that. I do not hate Elizabeth Warren. I absolutely do not hate her. She is still my number two choice. I like her. I don’t like what has happened to her in the last two months. I do not like that she has flip-flopped on Medicare For All. I do not like that her student loan debt forgiveness program doesn’t actually forgive all of student loan debt forgiveness. She has moved away from being a progressive and is going more towards the middle and that’s bad. That’s also probably why she’s losing. But she thought it was smart, politically, she was wrong, and so she is becoming someone who made it a lot easier for me to finally come out and say, you know what? She’s not who she used to be.

Therefore, I am a Bernie supporter now, hardcore, number one pick. Because prior to that, if you folks remember, I had been saying Bernie or Warren. Don’t even care the order. I would love to see them on the ticket together. That’s changed now, but it’s not because I’ve changed. It’s because she changed and if she goes forward with this plan and rides this thing to a brokered convention, she is going to screw each and every one of us because we know that those unpledged delegates and the superdelegates in round two of voting are going to screw all of us.