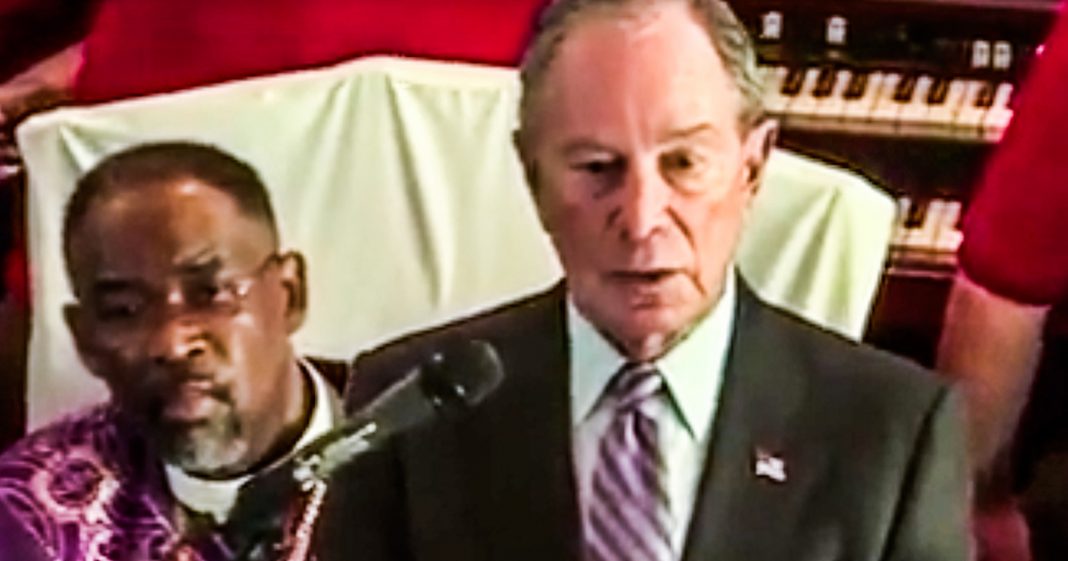 Over the weekend, Mike Bloomberg attended service at the Brown Chapel AME Church in Selma, Alabama, and he did not receive the welcome that he anticipated. Many members of the congregation stood up while Bloomberg was speaking and turned their backs to him to show him that his lip-service to their community means absolutely nothing. Ring of Fire’s Farron Cousins discusses this.

Yesterday was the 55th anniversary of Bloody Sunday in Selma, Alabama. The Brown Chapel AME Church is where a lot of candidates went. Reverend Al Sharpton was there. Reverend Jesse Jackson was there. It was a big deal in Selma, Alabama, obviously. It should be a big deal all around the country. So you had presidential candidates there, right, at Brown Chapel AME, and they each got a chance to speak those who came, and Mike Bloomberg, Bloomberg was one of them. But during Mike Bloomberg’s address to the congregation there on the 55th anniversary of Bloody Sunday right there in Selma, you had a little more than a dozen congregants stand up during Bloomberg speech and literally turn their backs to him. They didn’t say a word. They were not disrespectful in any way. They were not disruptive. But they stood up and showed their backs to him to let them know that they don’t care what he has to say, that they’re not going to let some guy like stop and frisk Mike Bloomberg come into their city on this day and try to hoodwink them into voting for him.

That’s what they were saying by saying nothing at all and that’s what all of these hardcore Bloomberg supporters need to understand. I mean, yeah, he’s gotten some endorsements from some wonderful members of the African American community and African American organizations. He has also given a ton of money to damn near all of them who have come out and endorsed him. These people in this church yesterday, they weren’t bought, they weren’t paid for and they let us know how they really feel and that’s going to hurt Mike Bloomberg, things like that, absolutely. Tomorrow is Super Tuesday. This would be the first time Mike Bloomberg has been on any ballot. We’ve got 14 States voting tomorrow and if yesterday, Sunday, was any indication of what’s going to happen to him, he is going to get massacred at the polls. I don’t care what the polling data says right now, when you put it in practice, because most of the polling data folks has been way wrong so far this primary season, right, when you put it in practice and when African Americans actually go to the polls and they see Michael Bloomberg’s name, they’re on that ballot. I guarantee you Bloomberg is going to crash and burn.

His whole story has not been told yet. We’ve only had a couple of weeks to try to explain to people, reveal these audio clips like Ben Dickson who has done such an amazing job with this have done, the story is not even all the way told yet and this is already happening to Bloomberg. So imagine what’s going to happen if this guy somehow secures the nomination, what’s going to happen to the Democratic party by July? It’ll have no African American support left except for the ones that Bloomberg has personally written a check to. That’s what’s going to happen and that is why Mike Bloomberg is dangerous because yeah, he has got a lot of money. Mike Bloom, I did the math this weekend, Mike Bloomberg has enough money to give every single American citizen $100 and then still have $30 billion in the bank, folks, that’s a lot of money. But Mike Bloomberg’s not going to cash out those hundred dollar checks for everybody or handout a hundred dollar bills to everybody to gain their vote. So he’s going to be in trouble and hopefully Super Tuesday exposes just how much trouble he’s in. So maybe some of these people who are taking all this Bloomberg money will finally look at themselves in the mirror and say, you know what? The money ain’t worth it. I’m done with this guy.