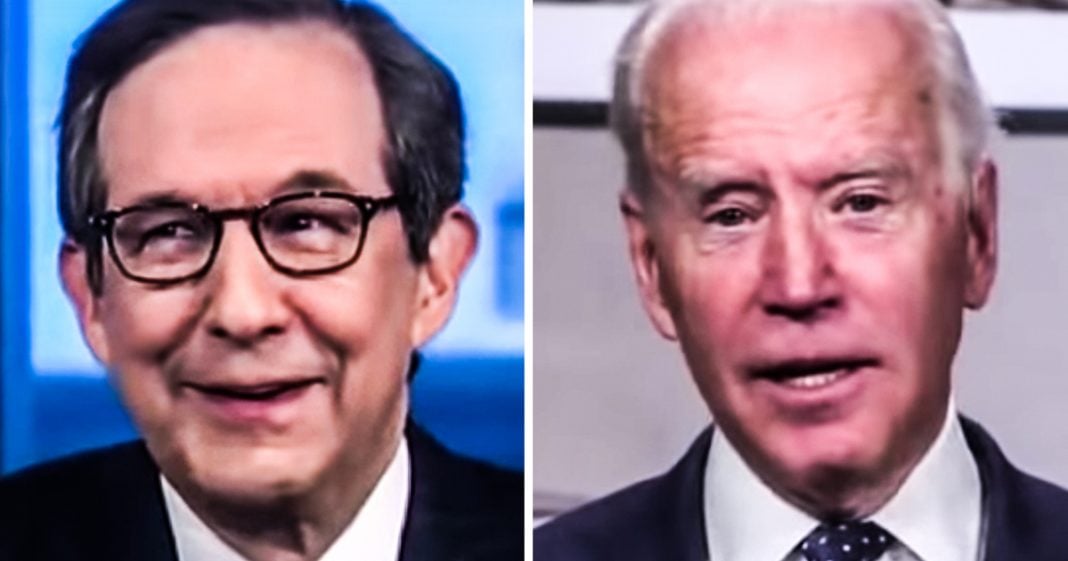 During an interview with Chris Wallace on Fox News this weekend, Joe Biden was asked about his mental competence after Trump took a few jabs at him during his CPAC speech. Biden bumbled around the answer, and then when the interview was over, he thanked “Chuck” for his time, and Wallace had to let him know that his name was actually Chris. Ring of Fire’s Farron Cousins discusses this.

Over the weekend, Fox news host, Chris Wallace hosted Joe Biden on his Fox news program and he called Biden out, asked him to talk about the fact that you literally had been lying for the last week about being arrested in South Africa while trying to visit Nelson Mandela. And then he led in and said, you know this lie, and he played the clip of Joe Biden actually saying it, you know, this lie is raising a lot more questions about your mental competency and then he went on to play a clip of Donald Trump from CPAC where he mocked Biden’s alleged mental decline. And here is what happened after Biden was confronted about his mental competency on Chris Wallace’s Fox news program. Here it is.

You know, rule number one, if somebody is going to question whether or not you’re mentally competent, try not to get their name wrong five seconds later. Really not a good look there, Joe. And Joe did say after that like, oh I just did Chuck because he did just go on Chuck Todd’s show and so yes, he got the name screwed up. That does not mean that Joe Biden is mentally incompetent. It honestly doesn’t. But there’s a perception problem, right? Because the people who watch Chris Wallace’s Fox news program, most of them are pretty hardcore conservatives. You’re not getting a whole lot of progressive’s watching that program. And when you have Republicans who are already hearing from their God and savior, Donald Trump, telling you that Joe Biden isn’t all there mentally and then Joe Biden can’t remember the dude’s name. You just added so much fuel to the fire and yeah, that was an innocent slip up.

That was not Joe Biden’s mental decline. We’ve seen evidence of Joe Biden’s mental decline, but this wasn’t it. The problem is the perception. He said, hey, you seem mentally unstable. Nah Chuck, I’m good. Uh, my name’s Chris. You, you, you proved his point even though you didn’t actually prove his point. You see what I’m saying? You have to do better, Joe. Yes, things get confusing, but you’ve also been around long enough. You know who these people are. You know who you’re talking to. You’ve done these shows before. You have to be sharp as a tack in order to not get attacked for these kinds of things and you blew it there. This is going to be a campaign talking point and yes, it’s ironic because Donald Trump is clearly not all there either, but his base doesn’t care about it. They do care if the Democratic nominee seems to be losing his mind, and this interview didn’t do Joe any favors.

It’s like when you see somebody say something ridiculous on social media and you’ll respond with your stupid, but you use the wrong form of you’re, so then you look stupid. That’s what this interview was for Joe Biden. It was an honest mistake. An honest slip up. It is not indicative of any kind of mental decline, but when you’re being asked about your mental state, you probably need to get the guy’s name right so that you don’t prove his point for him and unfortunately that’s what Joe Biden did. As I said, we have seen plenty of evidence out there about Joe Biden not being all there mentally. It is something that happens to a lot of people as they get older. That’s not an attack on him. It’s not an insult. It’s a natural progression of the brain. This wasn’t it, but unfortunately for the viewers of that program, they certainly think it is.