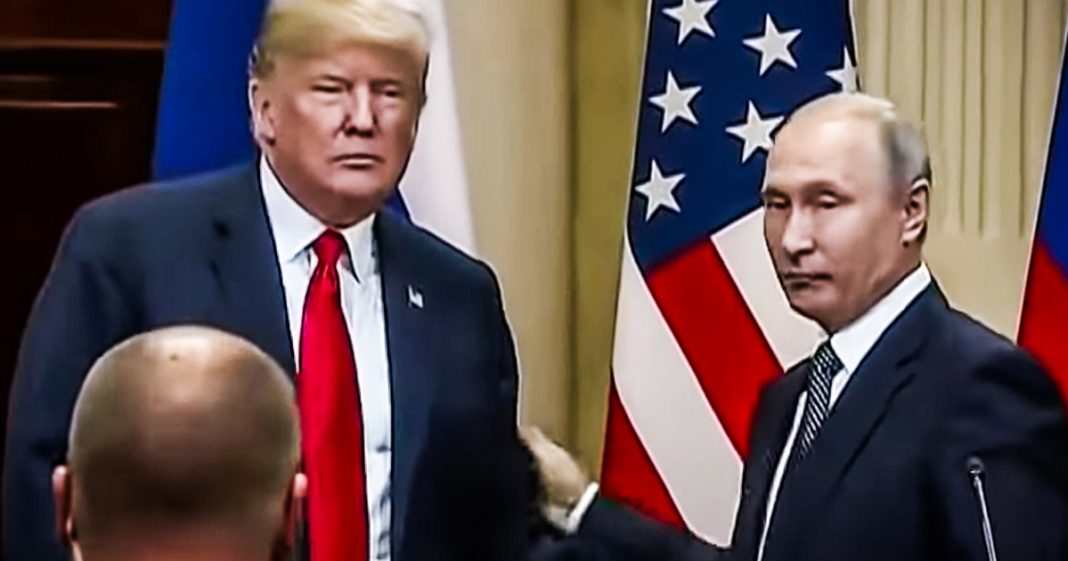 Donald Trump is suing the New York Times for libel, alleging that the paper’s claim that Trump had a secret deal with Putin to defeat Hillary Clinton in the 2016 election was a complete fabrication. Unfortunately for Trump, libel laws put most of the burden of proof onto the plaintiff, and he’ll have to PROVE that he wasn’t working with a foreign country to sway the results of the election. Ring of Fire’s Farron Cousins discusses this.

It was announced this week that Donald Trump’s reelection campaign is suing the New York Times on Donald Trump’s behalf over allegedly false claims that Donald Trump in 2016 had some kind of agreement in place with Vladimir Putin to destroy Hillary Clinton and send Trump to the White House. Now here’s the thing. Let me read this from the Trump reelection campaign. This is what they said when they announced the lawsuit. Today, the president’s reelection campaign filed suit against the New York Times for falsely stating the campaign had an overarching deal with Vladimir Putin’s oligarchy to help the campaign against Hillary Clinton in exchange for a new pro Russian foreign policy starting with relief from economic sanctions. This actually was spawned by an op-ed in the New York Times by an opinion columnist titled The Real Trump-Russia Quid Pro Quo by a man named Max Frankel. Now here’s the thing, those are pretty bold accusations in this op-ed, right? I mean, you are just flat out there stating Donald Trump had to deal with Putin himself to take down Hillary Clinton in exchange for getting rid of the sanctions.

That is very specific and I’m not gonna lie, you really didn’t have the evidence with you to back that up, but libel lawsuits work a little bit differently folks. And even though Trump, believe it or not, does have a pretty good case here, it may not be as good as they think it is because in a libel suit, for the most part, the plaintiff has to prove that what the other person said was false. So by filing this lawsuit, they have opened up the door for the New York Times and their lawyers to go through their campaign material to go through emails, to go through documents, to go through everything because that’s how discovery works. They get to get all of those dirty little secrets, unless of course they decide, oh, we forgot about that. Maybe we’re not gonna file this suit after all. Because here’s the thing, the New YorkTtimes may not find something to back up the claim made by Frankel in the op-ed, but they will certainly find some pretty damning material in there that would eventually become public because of the way that court records work. Unless the Trump administration sued to have them sealed.

So yeah, this could be very interesting. Here’s something people have to understand about libel laws. There’s certain different things that either have to be proven or disproven. Typically a set of four. First one is the statement, which must be about another person must be false, must be false. So if that statement made by Frankel is proven to be true, automatically there’s no libel. Number two, the statement must be published to a third party who cannot also be the person who is being defamed. So it had to be visible is what that means. You know, can’t just be something you said to your buddy in a back alley when nobody was listening. That’s not slander. You can’t sue for that, has to be something made public. The third one, now this is what could easily bite the New York Times here. If the nature of the statement is of public concern, the person who has published it must be at least liable in negligence. That’s important. Public figures who seek to prove that they have been defamed must prove an additional element under the first amendment of the US constitution that in publishing the statement, the defendant was acting with actual malice by publishing something they know to be a lie or at least to have had a total dis, disregard for whether the statement is true or not.

Number four, the person about whom the defamatory statement is made must be damaged by the statement. But here’s the thing, it’s that third when the actual malice. Publishing something you know is false. It’s likely the New York Times did that because here’s the thing folks, we all know that Russia helped the, the Republicans in 2016, that’s a given. The evidence is there, but if you try to make a claim beyond that and say that Trump himself had a deal with Putin himself, that he was going to lift the sanctions if Putin made him pres. See, now you’re treading into territory where you don’t have that evidence. Okay. It could have happened. It could be very likely, but you can’t prove it and that’s going to get you sued every time. But again, this libel suit is a double edged sword. Trump may succeed in hurting the New York Times, but through the discovery process, they’re probably going to hurt him pretty good as well.