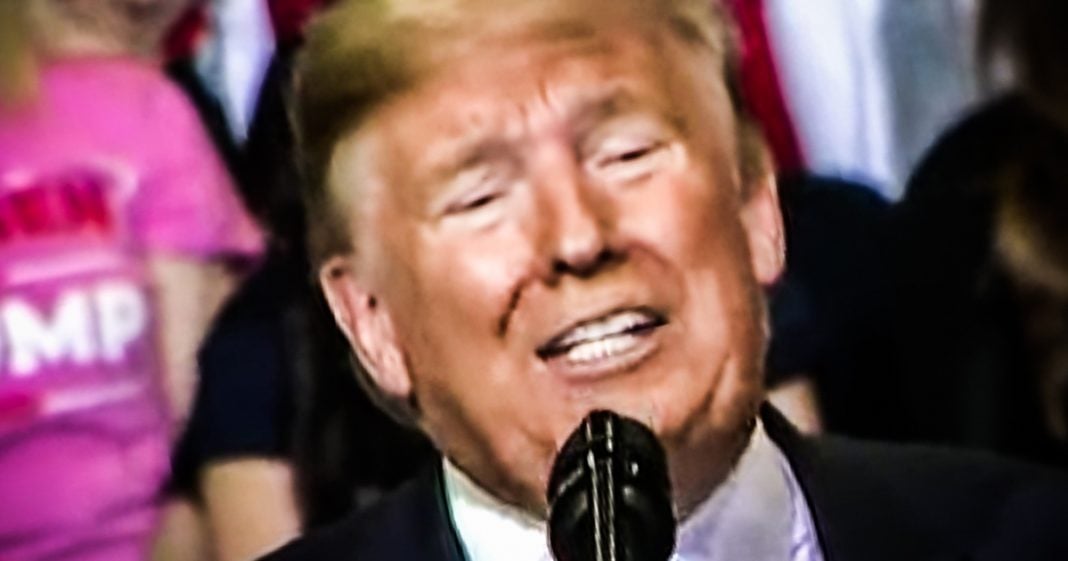 Donald Trump’s campaign knows that he has a very real problem attracting non-white voters, so they’ve tried to counter this by selling new, Trump-brand “woke” gear, including Trump 2020 merchandise that simply has the word “woke” written on it. They are also selling “Black Voices For Trump” shirts, but it is hard to imagine that these things are flying off the shelves. Ring of Fire’s Farron Cousins discusses this.

Donald Trump’s campaign has a very real problem with black voters and that problem is that they still cannot seem to attract them. Even though you have Candace Owens out there with her Blexit thing telling black voters leave the Democratic party come over to the Republicans we’re so much cooler over here. You’ve got, what’s his name, Terrence Williams, the comedian out there making these horribly angry and crazy sounding videos, telling black people to go to support Donald Trump and all that. But none of that has materialized into any kind of actual support for the president. So the Trump 2020 presidential campaign has come up with a new plan that they think is going to be far more effective to attract the black voters. And that is, they’re now selling gear with the word woke written on it. That’s right, folks, right now you can go to the Donald Trump store online, buy yourself a woke hat for $35. Buy yourself a tee-shirt that just says woke across it. And this is all designed to attract black voters because in the eyes of the Trump campaign, if you just call something woke or you put the word woke on it, suddenly that’s just going to make black people flock to you because this campaign knows so much about the African American community here in the United States.

You just throw the word, woke on it and watch them come running. Here’s the thing. They also are selling black voices for Trump shirts and on the website it says proudly wear the official black voices for Trump tee and show your support for our great president. And on the woke shirts and hats, the description simply says, it’s time to get #woke. Yeah, that’s really going to help you pull in more than 8% of the black vote here in the United States, Mr. President, because that’s what we’re looking at here, folks. In 2016 Donald Trump pulled in 8% of the national black vote. Currently, 80% of black voters here in America, according to the most recent poll, say that Donald Trump is a racist. You have 9 in 10 so 90% who disapprove of his job performance. So you’re rocking 80% say you’re a racist, 90% say you suck at your job and you think you can attract those people by putting out a tee-shirt that just says woke?

Yeah, not gonna happen. Maybe try throwing out some policies that don’t actually hurt this demographic for once. I don’t know. Shot in the dark there. Right? Just try it and see what happens. Going out and constantly saying this was the best economy black people have ever had in this country. That’s simply not enough because just because African American unemployment rates are lower doesn’t mean they’re all able to get by. It doesn’t mean they’ve all got a ton of money invested in that market that you’re tanking right now. No, they’re struggling. There is still systemic racism in this country. There is racism from police officers. There is environmental racism happening in this country every single day. And you think you can convince these people to vote for you because you’ve put out a new hat that just says the word woke?

Well, in fairness, they’re also launching a new initiative in addition to the hats and shirts. They’re going to open up 15 field offices for the Trump, Trump 2020 reelection campaign. Cities across the country that are predominantly black, with the goal of reaching out, meeting face to face with these voters and telling them why Donald Trump is such a great leader for their communities. But you’ve been trying that. You may not have opened headquarters in these cities, but you’ve sent your surrogates out there. They have seen your tweets. They have seen what people like Candace Owens have to say, and they don’t buy it. They may not all be Democrats, but they sure as hell don’t want to vote for Donald Trump.